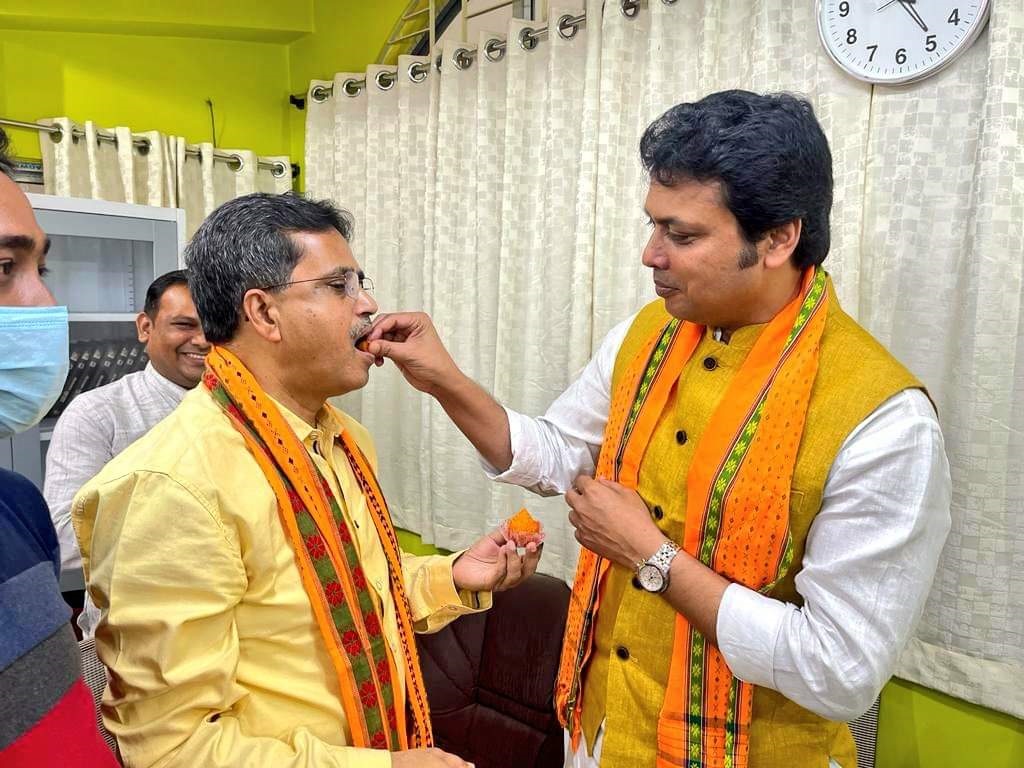 NEW DELHI: Tripura’s ruling BJP pulverised Mamata Banerjee’s TMC and the Left on Sunday, capturing with surprising ease the Agartala Municipal Corporation and 13 other civic bodies where it now has 329 of the 334 seats.

Contesting its first civic polls after it stormed to power in the northeastern state in 2018, the saffron party steamrollered a feeble challenge from the opposition after a vitriol-filled campaign marked by communal tension, clashes and court battles that forced the Supreme Court to intervene and order peaceful polls.

Not a single opposition candidate could win from any ward of the 51-member Agartala Municipal Corporation all of which went to the BJP.

The party secured 12 seats of Ambassa Municipal Council, while the TMC and the CPI-M won one seat each and another went to an independent candidate. The BJP also won 16 seats of Kailashahar Municipal Council and the CPI(M) got one. In Panisagar Nagar Panchayat, the BJP emerged victorious in 12 seats and the CPI (M) bagged one.

The BJP had won seven wards of Khowai Municipal Council, one of Dharmanagar Municipality, two of Melaghar Municipal Council and 10 of Jirania uncontested. It had also won without a contest the civic bodies of Ranirbazar, Bishal Ganj, Mohanpur, Kamalpur, Udaipur and Shantirbazar, which together account for 92 wards.

With the resounding victory, BJP has in its kitty 329 of the state’s 324 wards of urban civic bodies, the CPI-M, which ruled Tripura with an iron fist for decades, three, Mamata Banerjee’s Trinamool Congress and Independent (one each).

Chief Minister Biplab Kumar Deb, in the line of opposition fire over communal violence in the state, dubbed the victory as “historic” and said people of Tripura gave a “sothik jawab” (the right answer) to those opposed to the BJP.

“Those who tried to malign Tripura should see….people from majority and minority communities have together voted in favour of development under Narendra Modi ji,” Deb said, smiling broadly as BJP supporters gathered on the streets of Agartala, distributing sweets and dancing to drum beats.

There was jubilitation in the BJP camp in neighbouring West Bengal where the TMC had bested it in the assembly elections a few months ago.

“Heartiest congratulations to @BJP4Tripura & Hon’ble CM @BjpBiplab for registering landslide victory in Agartala Corporation & all other Nagar Panchayats and Municipalities. We are grateful to the people of Tripura for wiping out the corrupt & fascist Tolamool party of Bengal,” said Suvendu Adhikari, the leader of the Opposition in West Bengal on Twitter.

The TMC brass, however, put up a brave face despite the crushing defeat.

Taking to Twitter, TMC national general secretary Abhishek Banerjee said the performance was “exceptional” for his party, which had negligible presence in Tripura.

“This is despite the fact that we commenced our activities barely 3 months ago and @BJP4Tripura left no stone unturned to BUTCHER DEMOCRACY in Tripura. Congratulations to all the brave soldiers of @AITC4Tripura for their exemplary courage,” he tweeted.

Echoing him, TMC’s West Bengal general secretary and spokesperson Kunal Ghosh said that his party has been able to secure the second position in several seats, “despite the violence unleashed by the ruling BJP” there.

“2023 is ours, it (the results) forms the foundation of Trinamool’s victory in 2023,” Ghosh tweeted as results keep pouring in from different municipal bodies and BJP workers here were seen feasting on sweets and smearing each other with ‘gulal’ during the day to celebrate their party’s victory in the neighbouring state.