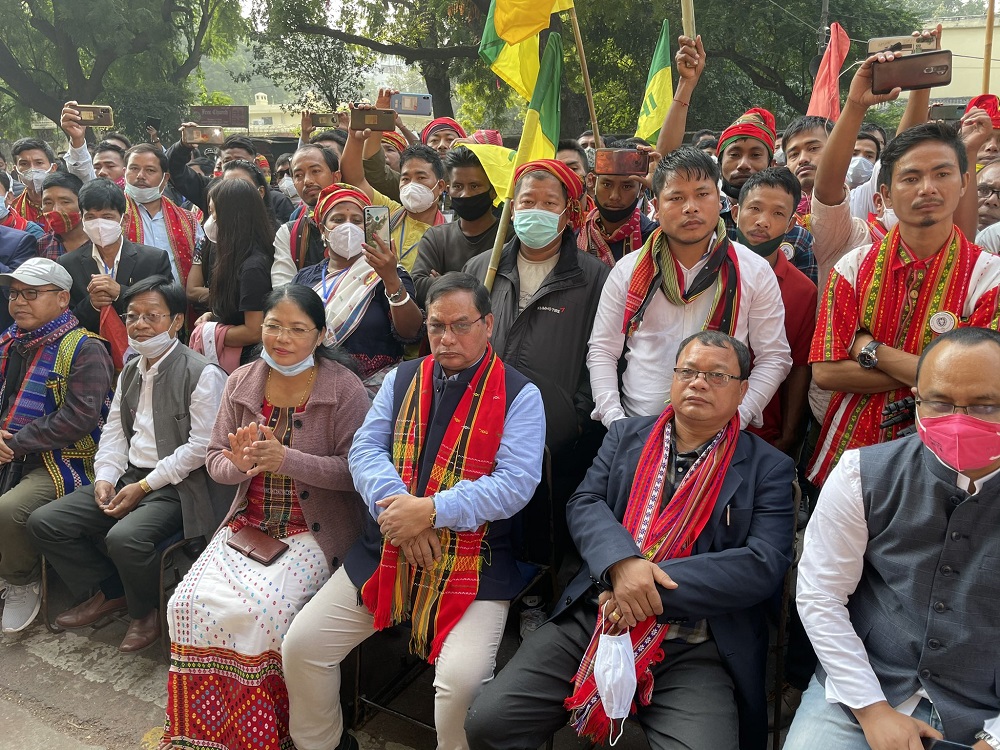 Standing in solidarity with Tiprasa and their demands. Glad to see such active participation of women in their legitimate demands from the state and the centre and @PradyotManikya ji working hard to raise their voices in Delhi. pic.twitter.com/WkHtbKN4DK

Led by their leaders, hundreds of members of the two tribal based parties took part in the demonstrations where Congress’ Rajya Sabha Member Jairam Ramesh and Shiv Sena’s Deputy Leader in the Rajya Sabha Priyanka Chaturvedi took part.

TIPRA’s spokesman Kamal Koloi said that they earlier planned to meet union Home Minister Amit Shah to apprise him about their demand but Prime Minister’s Office indicated that PM Narendra Modi “has expressed his desire to meet the tribal leaders”.

Delhi Chief Minister Arvind Kejriwal might come to the demonstration site on Wednesday to express his solidarity, Koloi told IANS over phone.

Deb Barman, head of erstwhile royal house of Tripura, on Tuesday said that for the all round socio-economic development and the protection of the traditional life, culture and customs the “Greater Tipraland” is necessary and this can be done under the Indian constitution.

Most of the national parties including the BJP, CPI-M and the Congress, have been opposing the “Greater Tipraland” demand, while the demand triggered huge doubts and fears in the mixed populated Tripura.

“Delhi listen to us! We are here to ask for our constitutional rights! Everyone is welcome to Greater Tipraland,” Deb Barman tweeted.

“Under the ‘Greater Tipraland’ concept, a powerful council would be constituted for the all-round socio economic development of the indigenous tribals residing in the eight northeastern states and the neighbouring countries, including Bangladesh. Such councils exist in European countries. We want to resolve the tribals’ basic problems permanently,” Deb Barman had earlier told IANS.

The IPFT, which has been agitating since 2009 for the creation of a separate state by upgrading TTAADC, which has a jurisdiction on over two-thirds of Tripura’s 10,491 sq. km. area and is home to over 12,16,000 people, of which 90 per cent are tribals.

The TTAADC, which was constituted under the Sixth Schedule of the Indian Constitution in June 1985 for the socio-economic development of the tribals, is considered as a mini-legislative assembly of Tripura in terms of its jurisdiction and constitutional power.