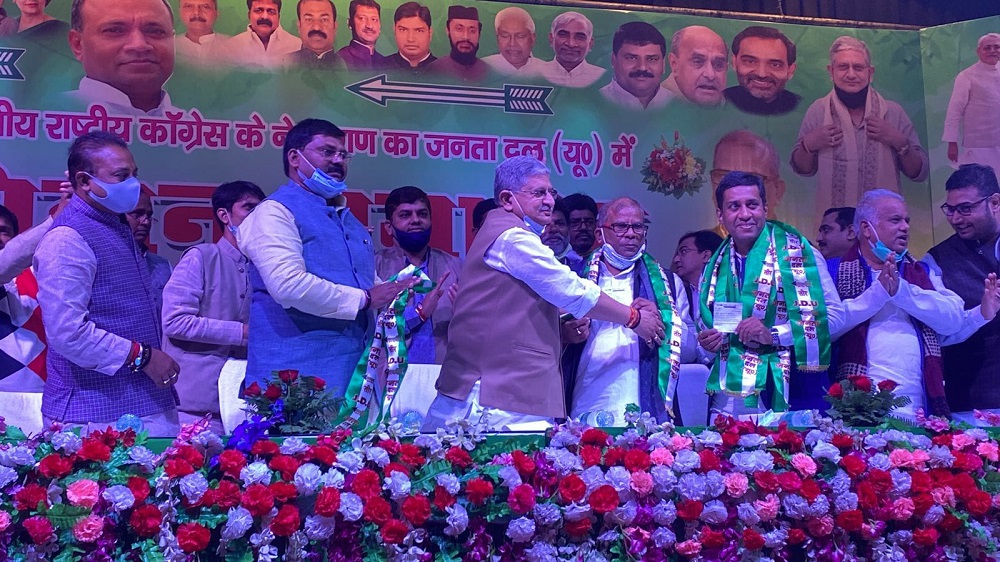 PATNA: In a setback to the Congress in Bihar, Shubhanand Mukesh, whose late father Sadanand Singh was a party heavyweight, on Sunday crossed over to Chief Minister Nitish Kumar’s JD(U) along with a large number of supporters.

Mukesh was inducted into the JD(U) by national president Rajiv Ranjan Singh alias Lalan at a glittering ceremony inside the sprawling Shri Krishna Memorial Hall here.

The current Bihar Pradesh Congress Committee (BPCC) chief, Madan Mohan Jha, sought to make light of the switchover, stressing that Mukesh owed his standing to his father and did not have any political accomplishments of his own.

Notably, in the Assembly polls last year, Mukesh fought on a Congress ticket from Kahalgaon but failed to retain for the party a seat his father had represented for a record eight terms.

While Sadanand Singh was on his death bed, Mukesh had accused the Congress leadership of showing apathy towards his father who had been a former Assembly Speaker and leader of Congress Legislature Party.

The cross over brings back the spotlight on the poor state of the Congress in Bihar, which it ruled till 1990 but where it has become a spent force. The grand old party was also recently dumped by its domineering ally, Lalu Prasad’s RJD.

At least three former presidents of the BPCC have joined other parties in the last decade.

These include minister Ashok Choudhary, who was present at the function where Mukesh joined the JD(U).

Other former state Congress chiefs who have jumped ship are Mehboob Ali Kaiser, who is serving his second term as LJP MP from Khagaria, and Ram Jatan Sinha, who has been a fierce critic of Sadanand Singh and is now trying to find his feet after a brief association with the JD(U).