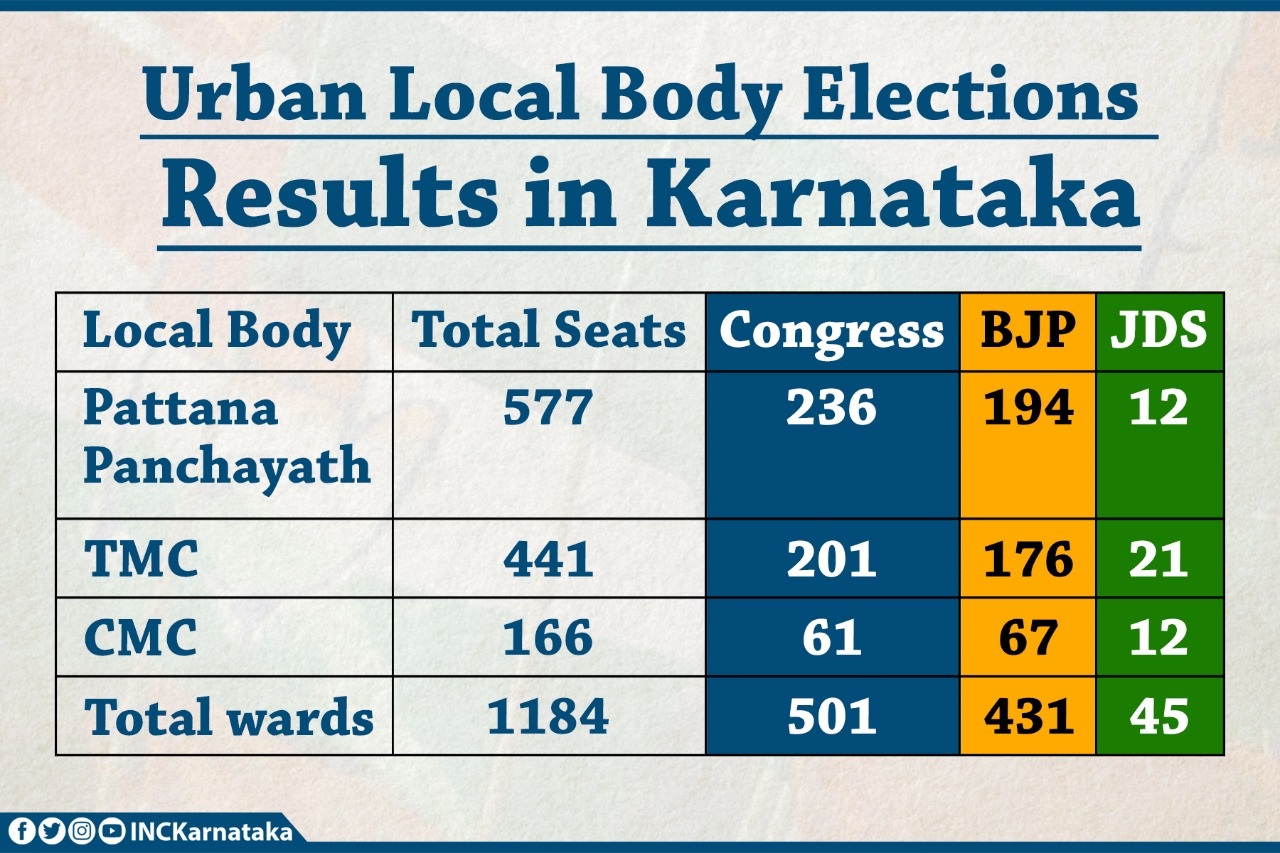 BENGALURU: Opposition Congress has outperformed the ruling BJP in the polls held for 58 urban local bodies (ULBs) spread across 20 districts in Karnataka, for which results were declared on Thursday.

Out of a total 1,184 wards that went for polls from these ULBs on Monday, the Congress won in 501 while the BJP managed to win in 433 and JD(S) in 45, the State Election Commission said.

According to SEC, the remaining 205 seats were bagged by independents and smaller parties.

The results are being seen as a warning bell for the BJP ahead of the 2023 assembly polls, and as signs of anti-incumbency, even as the party maintained the losses occurred in places where minority voters were concentrated.

In what is also being viewed as a personal setback to Chief Minister Basavaraj Bommai, the Congress managed to retain Bankapur town municipal council and Guttal town panchayat, in his home constituency of Shiggaon.

BJP has also lost urban local bodies in the home turf of a couple of Ministers like B Sriramulu’s Nayakanahatti town panchayat.

Congress, which is expected to take control of over two dozen ULBs, is seeing the results as an indication of the things to come during the 2023 general election elections.

Leader of Opposition Siddaramaiah said the results are the reflection of the BJP’s “hopeless governance”.

Meanwhile, Randeep Singh Surjewala, who is in-charge of Congress affairs in Karnataka, congratulated state party chief D K Shivakumar, the MLAs and all senior leaders of the party on the electoral outcome.

“Their continued hard work and unity in action will bring the Congress back to power in the state and usher in a new era of putting Karnataka as the number one state in development,” he said in a statement.

Noting that the BJP’s performance has improved compared to the last time and it could have been better, Chief Minister Bommai said, “If you observe, as these places have concentration of minority community voters, we have not been getting good results, but this time due to efforts, in places like Gadag and other, we have got success.” On BJP’s defeat in his constituency, he said, “we had never won there (in Bankapur), minority voters are 65 per cent, it won’t be right for me to say more. Same is the case with Guttal…. we will continue with our development work there also.” Bommai further hit back at Congress stating that they are dreaming about coming to power after assembly polls.