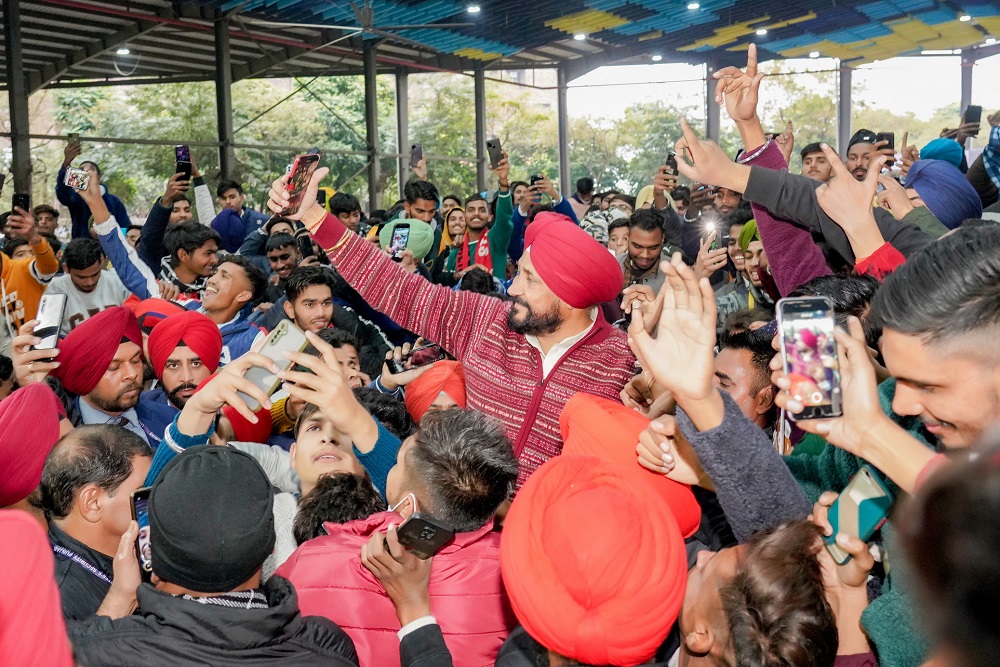 NEW DELHI: Facing flak from the BJP over the “security lapse” during the prime minister’s Punjab visit, Chief Minister Charanjit Singh Channi on Thursday alleged that Narendra Modi’s “gimmick” of “threat to his life” was aimed at “toppling a democratically elected government” in the state.

Channi further said the prime minister is a respected leader of the nation but it does not behove a leader of his stature to indulge in “such cheap theatrics”.

He was addressing a gathering here after laying the foundation stone for development works worth Rs 18 crore at the New Grain Market, an official statement said.

The chief minister claimed there was no threat to Modi’s life but he cancelled his programme on Wednesday because of less number of people in the BJP’s rally at Ferozepur.

He said because of the empty chairs at the rally venue, the prime minister went back to the national capital citing the “frivolous reason of security threat”.

Channi alleged that the “false pretext” on which the PM cancelled his visit was part of a “larger conspiracy to defame Punjab and murder democracy in the state on lines of what was done earlier in Jammu and Kashmir”.

The chief minister asked how could the prime minister’s life be threatened if the protestors were more than a kilometre away from him.

He said that the place where Modi’s cavalcade stopped not even a slogan was raised, then how could his life have been threatened.

Channi reminded Modi that Punjabis have sacrificed their lives for unity, integrity and sovereignty of the country and added that they could never pose any danger to the life and security of the prime minister.

“The thin presence of public in the rally has exposed the poor position of the BJP in the state which is not going down well with its entire leadership,” he claimed.

Citing a comparison, Channi said the weather was poor on Wednesday and on Thursday as well but there were very few takers for BJP’s rally on Wednesday, whereas the Congress’s rally was swelling with people across the state.

“Yesterday’s gimmick by the prime minister and his coterie is aimed at imposing the President rule in the state,” he claimed.

Channi reminded the prime minister that Punjab can be won only with love and not by pressure. He said Punjabis will vehemently oppose any move to destabilise democracy in the state.

The chief minister urged Modi to “stop defaming the state and its people for vested political interests”. Channi reminded him that Punjabis have played a key role in socio-economic development of the country, besides safeguarding its borders.

“The slanderous campaign launched by the BJP is an insult to all the Punjabis and it is unwarranted and undesirable,” he said.

At a separate event at Machhiwara in Ludhiana, Channi asked what were the intelligence officials around the prime minister doing if they had sensed a threat to his safety.

Channi said the fact of the matter was that barely 700 people turned up at the BJP’s rally but the blame was pinned on the Punjab government citing security threat to the prime minister.

“The truth is that five days before the PM’s scheduled rally, the Special Protection Group (SPG) took over the landing spot, rally site and (went over) each security detail but later the prime minister’s cavalcade suddenly took land route,” Channi said, adding that the route was cleared by the SPG.

The chief minister reiterated that had there been any danger to the prime minister, every Punjabi was nationalist enough to face bullets as they had done before in the service of the nation.

Punjabis have never shied away from making sacrifices for the nation and are as patriotic a race as any other in the country, he said.

At Tanda in Hoshiarpur, Channi termed former chief minister Amarinder Singh a “political deadwood”, saying it was evident from a rally on Wednesday where the royal scion of Patiala addressed empty chairs.

He said that everyone knew Amarinder Singh had “backstabbed” Punjab due to which no one wanted to listen to him. “The day is not far when all the candidates of the Maharaja will lose their deposits in the polls,” Channi claimed.

Assailing AAP national convenor and Delhi Chief Minister Arvind Kejriwal, Channi described him as a “chronic liar”, alleging that he was trying to “mislead the people of the state with his fake promises”.

In a “major security lapse”, Modi’s convoy was stranded on a flyover due to a blockade by protesters in Ferozepur on Wednesday after which he returned from poll-bound Punjab without attending any event, including a scheduled rally.

The prime minister was scheduled to lay the foundation stone of development projects worth over Rs 42,750 crore, including the Delhi-Amritsar-Katra expressway and a PGIMER satellite centre on Wednesday, besides addressing a rally.