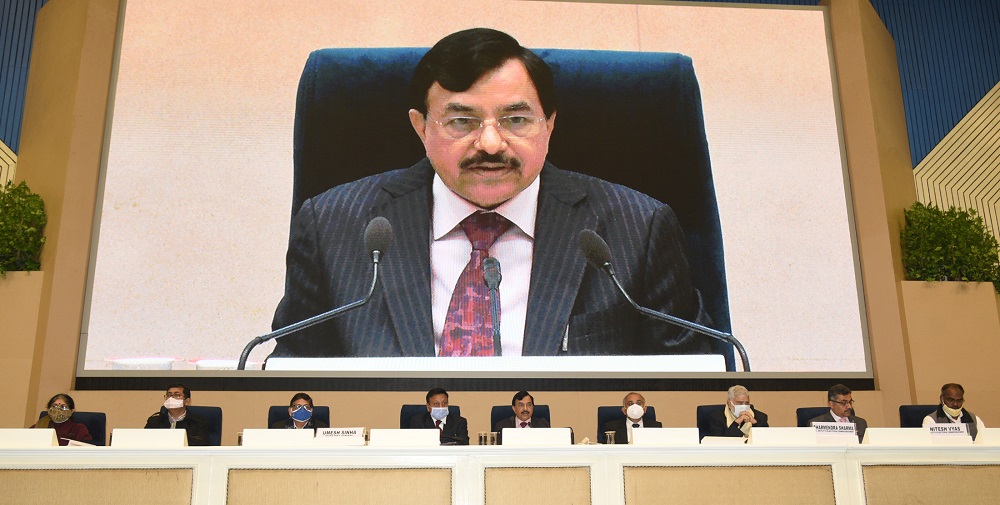 NEW DELHI: Assembly elections in Uttar Pradesh, Uttarakhand, Punjab, Manipur and Goa will be held between February 10 and March 7 in seven phases with the counting of votes on March 10, the Election Commission announced on Saturday and banned physical rallies and roadshows till January 15 due to Covid concerns.

The elections have huge political significance with BJP ruling four of these five states, while it is making a big push to capture Congress-ruled Punjab, where the Aam Aadmi Party is also emerging as an important player.

Announcing the election schedule with a strong focus on digital and virtual modes of campaigning in view of the Omicron scare, Chief Election Commissioner Sushil Chandra said the ban on rallies, roadshows, nukkad sabhas, padayatras and vehicle rallies will be reviewed on January 15.

“Physical rallies during the campaign, if allowed, after reviewing the situation need to follow the Covid-19 protocol,” Chandra said.

The poll panel has also banned victory celebrations and only two persons will be allowed to accompany a candidate to collect the winning certificate.

Asked about experts predicting the third wave of the Covid pandemic to peak in February, when voting for five of the seven phases of the polls will take place, he said the situation is very dynamic and nobody can predict Covid numbers of future dates.

He also assured voters that all necessary steps are being taken to ensure “Covid safe” elections and said they should come out in large numbers to exercise their franchise as polling booths will be sanitised and polling officers vaccinated.

In all, elections will be held for 690 assembly seats, and 18.3 crore people, including 8.5 crore women, will be eligible to cast their votes in the five states.

Welcoming the announcement of polls, BJP president J P Nadda urged the party workers to participate in this grand festival of democracy with their full strength while adhering to Covid-related and other guidelines laid down by the election body.

BJP general secretary Tarun Chugh said the party will contest these polls in five states with all its “might and energy” and form governments with a big majority.

Asserting that the Congress will contest strongly in these elections, party general secretary and chief spokesperson Randeep Surjewala said this is an opportunity for people to defeat the BJP and put an end to unemployment, price rise and atrocities against women and Dalits.

Responding to a question on EC holding polls amid a surge in Covid cases, the CEC said “caution, not panic” is needed and people and parties have to follow Covid-appropriate behaviour.

He also said people are going to markets and malls and, therefore, should come out to vote exercising caution.

Asked about farmers’ agitation and breach in the prime minister’s security in Punjab, Chandra said the poll panel has assessed the security and law and order situation and a sufficient number of paramilitary personnel will be deployed in all states.

Responding to a specific question on Punjab regarding farmers’ agitation, he said, “No election is same, every election is different, every state is different. EC has assessed wherever there is a threat perception, wherever there are farmers’ protests and we have spoken with security agencies of both the state and the Centre and those deployed at international borders before deciding the schedule.”

Voting in Western UP and Punjab, the two regions among those covered in the upcoming polls, would take place in the first two phases on February 10 and February 14.

In the politically important Uttar Pradesh, voting will be held in 403 assembly seats, starting from the western region and will move towards the east over seven phases from February 10 to March 7.

The assembly polls are being held at a time when the BJP is facing criticism despite withdrawing the three controversial farm laws.

Welcoming the announcement of the poll schedule, Uttar Pradesh Chief Minister Yogi Adityanath said the BJP will return to power with an “overwhelming majority”. BSP president and former chief minister Mayawati on the other hand sought a check on the tendency in the ruling party to violate the model code of conduct and proper protection of voting rights of all the citizens.

The Model Code of Conduct has come into effect in the five states with the announcement of the elections.

For Manipur’s 60 assembly constituencies, elections will be held in two phases on February 27 and March 3, while polling in Goa (40 seats), Punjab (117 seats) and Uttarakhand (70 seats) will be held on February 14.

“The commission will not hesitate to bar parties from further rallies if Covid protocol is not followed,” Chandra said.

The Election Commission has also set stringent Covid guidelines for the polls.

It has restricted the number of people for door-to-door campaigns to five and has asked political parties to provide masks, hand sanitisers to people attending rallies if they are allowed, Chandra said.

The EC said that it has asked chief secretaries of the poll-bound states to expedite the vaccination drive.

Some of these states, including Goa, are witnessing a surge in Covid cases.

The EC has also doubled the air time on Doordarshan for political parties, he said.

Chandra, who was flanked by election commissioners Rajiv Kumar and Anup Chandra Pandey, said parties and candidates have been advised to conduct their campaigns on virtual and digital modes as much as possible.

He also said there would be zero-tolerance for money power and misuse of the government machinery by any party or candidate, while there would a strict vigil against hate speech and fake news including on social media.

Asked whether the presentation of Union Budget on February 1 and the presidential address to the two houses of Parliament before that would disturb the level-playing field, Chandra said the poll panel would not like to interfere in the budget presentation as it is a scheduled exercise meant for the whole country and not just the five poll-bound states.