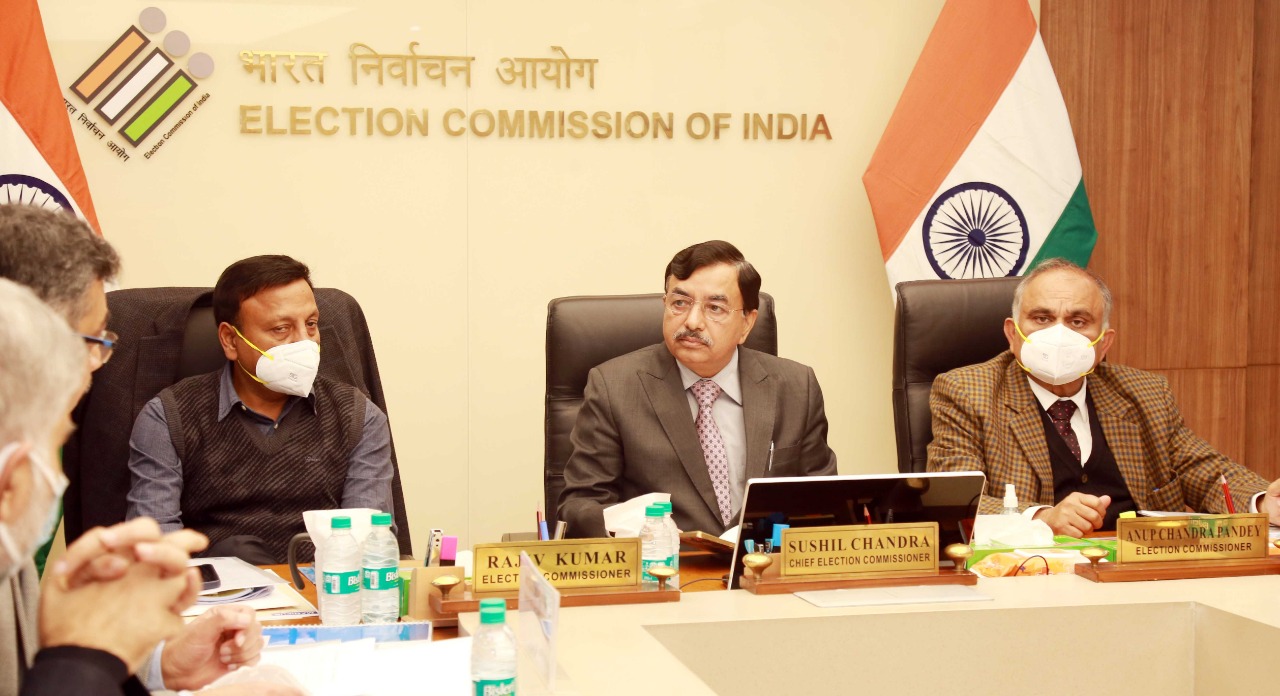 NEW DELHI: Amid a surge in COVID-19 cases, the Election Commission on Saturday extended its ban on physical rallies and roadshows until January 22 in the five poll-bound states, saying it will subsequently review the situation and issue fresh instructions.

The poll panel, however, granted a relaxation for the political parties to the extent that indoor meetings of maximum 300 people or 50 per cent of the capacity of the hall, or the prescribed limit set by state disaster management authorities can be held, an official statement said.

The EC said it took the decision after considering the present situation, facts and circumstances, as also the inputs received in the virtual meetings it held on Saturday with the Union health ministry, chief secretaries and health secretaries and the chief electoral officers of the poll-going states.

“No roadshows, padyatras, cycle, bike, vehicle rally and processions shall be allowed till 22 January, 2022. Commission shall subsequently review the situation and issue further instructions accordingly,” the statement said.

No physical rally of political parties or candidates, including probable candidates, or any other group related to election will be allowed till 22 January, it said.

However, the Commission said “indoor meetings of maximum of 300 persons or 50 per cent of the capacity of the hall” or the prescribed limit set by state disaster management authorities (SDMA) will be allowed.

The poll watchdog directed political parties to ensure the compliance of Covid- appropriate behaviour and guidelines and Model Code of Conduct during the activities connected with elections.

On Friday, the SP held at a large public meeting in the compound of the party office in Lucknow, defying Covid norms.

An official in Lucknow had said the local administration is investigating the “violation”.

The poll panel directed state and district administrations to ensure compliance of all instructions related to the poll code and to the pandemic control measures.

While announcing the poll schedule for Uttar Pradesh, Uttarakhand Manipur, Goa and Punjab on January 8, the EC had taken an unprecedented step of banning public rallies, roadshows and similar physical campaigning events till January 15.

Various regional parties had urged the EC to relax its norms on banning physical rallies, saying virtual rallies will help only richer parties who have more resources to organise On January 8, the Commission had also listed out 16-point guidelines for campaigning as it banned ‘nukkad sabhas’ (corner meetings) on public roads and roundabouts, limited the number of persons allowed for door-to-door campaign to five, including the candidate, and prohibited victory processions after the counting on votes.

“Vaccination status and action plan for expeditiously completing vaccination for 1st, 2nd and booster dose for eligible persons amongst frontline workers and polling personnel was also reviewed, the statement said.

India registered 2,68,833 new Covid infections in a day taking the tally to 3,68,50,962, which includes 6,041 Omicron variant cases, according to the Union health ministry data on Saturday.

The Commission also discussed SDMA’s restrictions and state specific extant guidelines regulating the norms of gathering of persons during the period of pandemic.

Assembly elections in the five states will be held between February 10 and March 7 with the counting of votes on March 10. Voting for the first of the seven- phase Uttar Pradesh polls will be held on February 10.