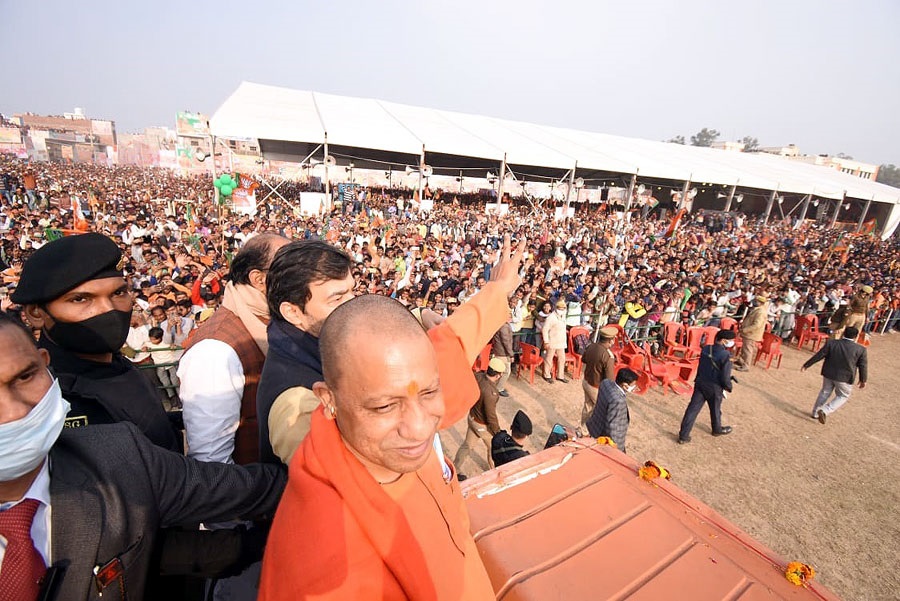 LUCKNOW: Yogi Adityanath, who has been declared BJP candidate from Gorakhpur will be the second leader to contest from the district as a Chief Minister after Tribhuvan Narayan Singh, who lost in 1971.

Singh had contested from Maniram assembly seat of the Gorakhpur district while being a Chief Minister.

There was a mixed reaction from political parties after Yogi Adityanath was made the BJP candidate from Gorakhpur Sadar seat on Saturday.

Main opposition Samajwadi Party chief Akhilesh Yadav on Saturday took a jibe at the BJP’s decision to field Yogi Adityanath from the Gorakhpur constituency, saying the saffron party has already sent him home.

Gorakhpur is the hometown of Adityanath. He had been the MP from Gorakhpur Lok Sabha seat since 1998 until he became the chief minister in 2017.

The SP chief had said, “As far as contesting elections is concerned, earlier it was said that he (Adityanath) will contest from Mathura, Prayagraj, Ayodhya or Deoband. I am happy that the BJP has already sent him home (Gorakhpur)

“Actually he did not get a ticket, he was sent back home”, he had added.

“Yogi is not a member of the BJP. Imagine the CM who was demanding a ticket and did not get the seat of his choice. Saints of Ayodhya had said that they bid farewell to him (Yogi Adityanath) if he was given ticket from there after which the BJP has given him farewell and sent him to Gorakhpur,” Akhilesh also said on Sunday.

SP National Spokesperson IP Singh told PTI on Monday that “the claim of our National President (Akhilesh Yadav) Jee will be 100 per cent true as our party defeated BJP from Gorakhpur in 2018 Lok Sabha byelection. As sitting BJP MLA Radha Mohan Das Agarwal was denied ticket from Gorakhpur Sadar seat and due to politics of lies and hatred this time the BJP will be wiped out from the entire state.”

In the past, BJP’s Rajya Sabha member Harnath Singh Yadav had written a letter to the BJP leadership demanding that CM Adityanath should be fielded from Mathura, while there was a speculation in the media about Yogi contesting from Ayodhya.

Amid the reaction by the opposition on Yogi’s candidature, the BJP said from its official Twitter handle, “Our Chief Minister Yogi Adityanath is contesting from Gorakhpur. Bua (Mayawati), Babua (Akhilesh Yadav) and Mrs Vadra Jee (Priyanka Gandhi Vadra) should tell from which seat you are contesting or will you not contest for fear of defeat.”

Senior BJP leader from Gorakhpur region Ajay Tiwari said that the mafia, criminals and corrupt “shiver” during Yogi’s tenure as chief minister and now the opposition parties have been blown away by the announcement of his candidature as till now not a single main leader of them has been able to decide from where he/she will contest.

“This is not a good sign for the BJP. It was a result of infighting. Congress will field a strong candidate against Yogi Adityanath and the way Tribhuvan Narayan Singh was defeated by Congress’ Pandit Ram Krishna Dwivedi in Maniram, Gorakhpur, in the same way, Congress candidate will defeat Yogi,” he said.

While Agarwal, who has been winning consecutive elections from Gorakhpur city since 2002, told PTI, “I am a dedicated worker of the BJP and welcomed the party’s decision,” but refused to take any other question.

However, his close supporter claimed that Agarwal said that he has served the people of Gorakhpur selflessly for 20 years and will not let it go to waste.

He told PTI, “Leave the matter of history. Yogi has given a new dimension to development in Gorakhpur and if he wins elections, there will be more development.”

Avnish Kumar Rai Pintu, another resident of Gorakhpur also said that there is a one-sided atmosphere in favour of Yogi and people are happy after his candidature from Gorakhpur.

In October 1970, Congress (O) candidate Tribhuvan Narayan Singh became the Chief Minister when the Congress was divided into two factions.

As he was not part of any of the two houses of the state legislature, he decided to contest election from the Maniram assembly constituency of Gorakhpur but lost to the Congress’ candidate in April 1971.

In the 2017 elections, Congress candidate Rana Rahul Singh came second but there was a huge difference between Agarwal and his votes.

Elections for the 403-member Uttar Pradesh assembly are scheduled to be held in seven phases starting from February 10.