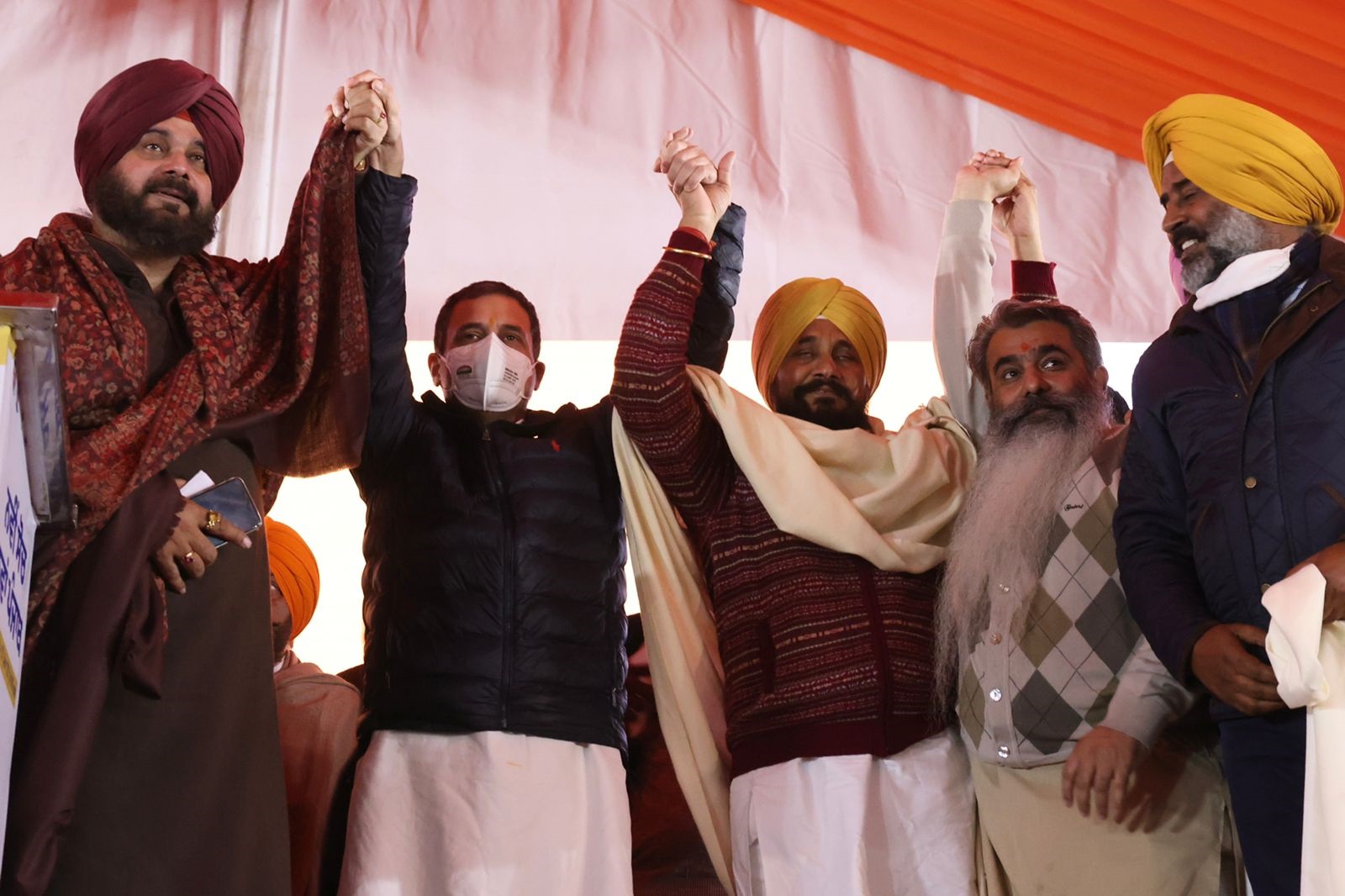 JALANDHAR:  Congress leader Rahul Gandhi on Thursday said the party will go into the Punjab Assembly polls with a CM face and the decision on it will be taken soon after consulting party workers.

Addressing a virtual rally in Jalandhar, Gandhi said Chief Minister Charanjit Singh Channi and state party president Navjot Singh Sidhu have assured him that whoever is chosen as the CM face, the other will support him.

Gandhi made the statement after Sidhu at the rally demanded that the party declare the CM face for the polls and said he doesn’t want to be a “showpiece”.

Over the past several weeks, both Channi and Sidhu have indicated, directly or indirectly, keenness to be declared as the party’s CM face.

Differences in the party continued to simmer even after the ouster of Amarinder Singh as the CM and Channi’s elevation to the post.

Earlier in the day, in a show of unity, Rahul Gandhi led party candidates to the Amritsar’s Golden Temple, where they offered prayers and sat for a langar.

Rahul at the rally said both Channi and Sidhu told him that the biggest question in Punjab is who will lead the Congress in the state.

“Media people call it the chief ministerial candidate,” he said.

“Normally, we do not do this but if the Congress party, our workers and Punjab want this, then we will take a decision on the CM face for you,” Gandhi said.

The demand for declaring the chief ministerial face will be met at the earliest, he said.

“We will take this decision after consulting our workers. And the person will take Punjab ahead and others will work as a team,” he said.

“Both Sidhu and Channi gave me an assurance that two people cannot lead and only one can lead. Both told me whoever leads, the other will put all his energy behind him,” said Gandhi.

Earlier in his address, Sidhu asked Gandhi to declare the chief ministerial face, saying that people want clarity who will implement the agenda and roadmap of the party, to which Channi later said he was never after any post and anyone whose name is announced, he will wholeheartedly back him.

Referring to the state’s debt, Sidhu said people want to know who will put them out of it, how it will be done and what agenda or roadmap is there.

“Today, people of Punjab ask who will implement this agenda and which person or face will (you) give,” he said.

“I say you declare anyone you want but bring Punjab out of this confusion,” he said, adding that once the confusion is removed, the Congress will form the government.

Though Sidhu said the party will accept the decision Gandhi takes, he stressed that he does not want to be a “darshani ghoda” (showpiece).

“We all are together and we are not fighting for TRP. We are fighting for forming the next government,” he said.

Later Channi said, “I say this with folded hands. We are Punjabis, we want state’s welfare. We don’t want that (AAP leader) Kejriwal come here and say there is a feud in their house and he will then tell people to give him a chance, which will cause harm to Punjab. We don’t want this damage,”

Channi also called Sidhu and state minister Bharat Bhushan Ashu as his elder brothers and thanked Rahul Gandhi for making him the CM.

“I don’t want any post. Make anyone CM, Channi will accept it wholeheartedly and campaign. This is Punjab’s requirement,” he said.

He said the Congress and people of Punjab made an ordinary person from a humble background the CM. “What more do I need, he said.

“It is not just an honour for me but for the entire Punjab,” he said.

Later addressing the rally, Gandhi said the question is about Punjab’s future, not just about the elections.

“For us, Punjab is a symbol. For us, it is not a state alone, it is an ideology. Punjab is brotherhood,” he continued.

He said the Punjabiyat meant the respect for all religions, women and elders. “This is your ideology and ours too,” Gandhi said addressing the rally.

“So, you have to make the choice,” Gandhi told people.

“There are many political parties in the country. But ours is not only a party but an ideology, one which defeated the British and built the nation. And in this ideology, we are all one,” Gandhi said.

Gandhi also spoke about mobilising resources from mining, transport and cable TV sectors for the welfare of the state.

“How to decentralise power in Punjab? Question arises. First of all, your money is in four areas, which are liquor, mining, transport and cable TV. Thousands of crore is in these system and they do not reach you,” he said.

“We have made a beginning but we do not need evolution. We need revolution and we want to give your money to you and in these four areas, we will not do evolutionary job but revolutionary,” said Gandhi.

Gandhi arrived in Jalandhar from Amritsar. His arrival was delayed as he reached Amritsar three hours behind schedule owing to bad weather.

After paying obeisance at the Golden Temple, he offered prayers at the Durgiana temple, Ram Tirath Sthal and the historic Jallianwala Bagh.