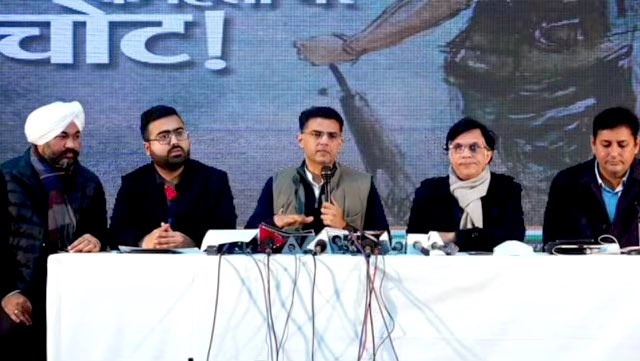 NEW DELHI: Congress leader Sachin Pilot on Friday exuded confidence that his party will put up a stupendous performance in the February 20 assembly polls in Punjab and retain power with an overwhelming majority.

“We will again form the government in Punjab with an overwhelming majority,” the senior leader from Rajasthan told a news conference here which he addressed along with Congress spokesperson Pawan Khera.

Pilot said senior leader Rahul Gandhi has already said the party will go with a chief minister face in Punjab polls and the decision will be taken after consulting party workers.

Regarding the polls in other states, Pilot said, “I have full confidence that we will form government in Goa, Uttarakhand, and Punjab”.

Pilot said he was campaigning in Uttar Pradesh on Thursday and accused the Samajwadi Party and Bahujan Samaj Party of failing to play the role opposition.

“For five years, neither the Samajwadi Party nor BSP

played the role of opposition. Be it Lakhimpur Kheri, Unnao, Hathras, or Dalit issues, it was the Congress which raised these issues, he said.

“A dozen of their MLAs and some ministers have deserted the party,” he said while accusing the BJP of playing divisive politics.

People have seen through these games and the saffron party can no longer fool the voters, he said.

He said the BJP-led central government talks about doubling the farmers’ income, but that has not happened yet.

Farmers from various parts of the country agitated against the three farm laws for more than one year and so many of them died during the prolonged stir, he said.

“Will the families of those farmers not question the government,” he said.

Pilot said Congress is the only party which together with its allies can defeat the BJP at the national level.

Referring to last year’s bypolls in various assembly and parliament constituencies of Himachal Pradesh, Rajasthan, and Karnataka wherein the BJP suffered a setback, Pilot said the results were a verdict against the “anti-people” policies of the BJP-led dispensation.

He also slammed the BJP-led government at the Centre over “high prices of fuel and cooking gas and other essential commodities and the growing rate of unemployment.