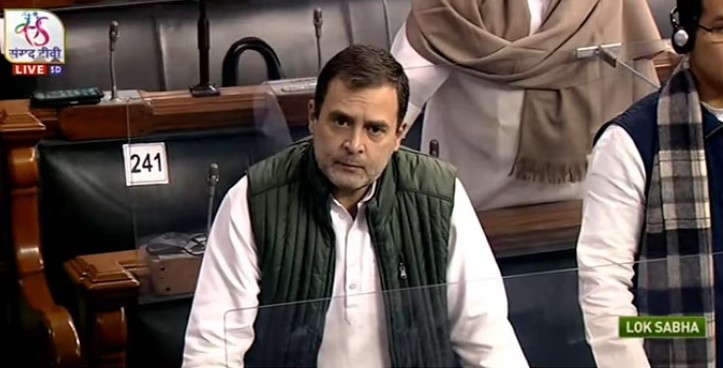 NEW DELHI: Congress leader Rahul Gandhi on Wednesday hit out at the government over its foreign policy decisions which he alleged have brought China and Pakistan together against India, eliciting a sharp response from External Affairs Minister S Jaishankar who said “some history lessons are in order” for the Wayanad MP.

Rahul Gandhi alleged in Lok Sabha that it is this Government which brought Pakistan and China together.Perhaps, some history lessons are in order:

-In 1963,Pakistan illegally handed over the Shaksgam valley to China.

-China built the Karakoram highway through PoK in the 1970s.

Speaking first from the Opposition side in Lok Sabha during the debate on the Motion of Thanks on the President’s address, he said while the strategic goal of India has been to keep China and Pakistan apart, the government was doing the opposite.

“The Chinese have a very clear vision of what they want to do… the single biggest strategic goal of India’s foreign policy has been to keep Pakistan and China separate. This is fundamental for India and what you have done, is you have brought them together. Today, do not be under any illusion.

Gandhi further stated that China has a clear vision and urged the government to correct these mistakes.

“The foundations of their plan have been put in place in Doklam and in Ladakh. Don’t underestimate what we are facing. This is a very-very serious threat to the Indian nation. We have made huge strategic mistakes in Jammu and Kashmir, we have made huge strategic mistake in our foreign policy…you have brought China and Pakistan together, you have taken the concept of two different fronts and converted it into one unified front…

“…It is very clear that the Chinese and the Pakistanis are planning. Look at the weapons they are buying, look at their activity, look at the way they are talking, look at who they are speaking too. I am clearly stating in the house of Parliament that we have made a massive blunder and we need to make sure, absolutely sure, that we can defend ourselves against the Chinese,” he said.

Gandhi had also accused the government of using the judiciary, the Election Commission, and Pegasus spyware as “instruments of destroying the voice of the union of states”.

Reacting to Gandhi’s allegations, Jaishankar tweeted, “Perhaps, some history lessons are in order: In 1963, Pakistan illegally handed over the Shaksgam valley to China. China built the Karakoram highway through PoK in the 1970s.”

Jaishankar said from the 1970s, the two countries also had close nuclear collaboration.

“In 2013, the China-Pakistan Economic Corridor started. So, ask yourself: were China and Pakistan distant then?” he questioned the Congress leader.

On Gandhi’ claim that New Delhi could not get a foreign guest for this year’s main Republic Day event here, Jaishankar said, “those who live in India know we were in the midst of a corona wave.”

He said the five Central Asian presidents, who were to come, did hold a virtual summit on January 27 with Prime Minister Narendra Modi.

“Did Rahul Gandhi miss that as well?” he wondered.