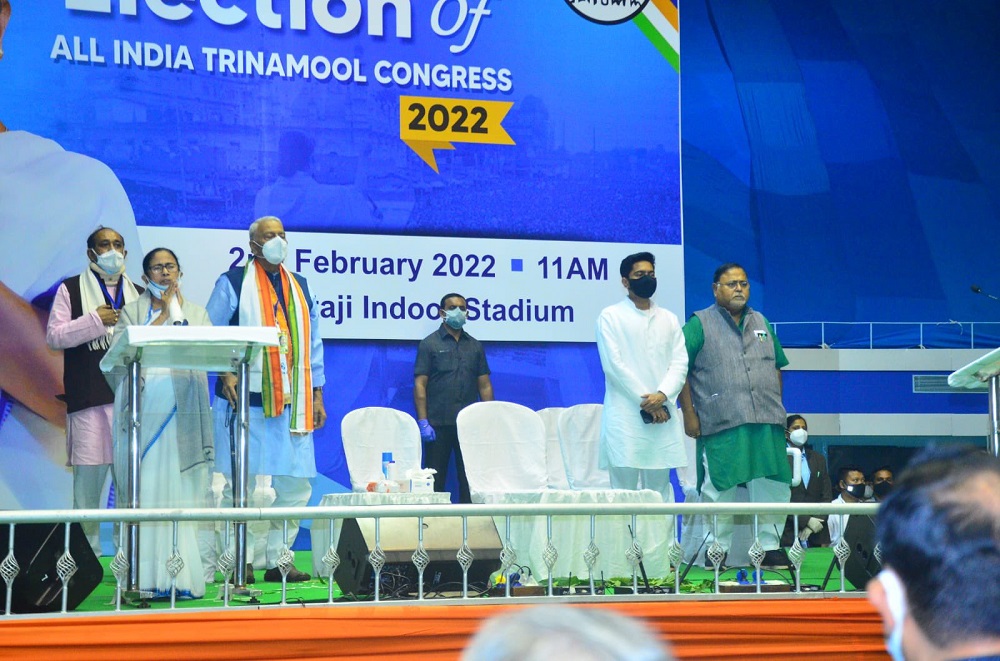 KOLKATA: West Bengal Chief Minister Mamata Banerjee, who was re-elected the TMC chairperson on Wednesday, urged party leaders to put up a united fight against the BJP and warned against infighting.

Banerjee’s message to party leaders came amid differences between the generation next leaders and a section of the old guard.

“The party has to fight hard to win all the 42 Lok Sabha seats in the next polls in Bengal. We have to take along everybody,” she said after being re-elected.

The TMC, she underscored, is synonymous with “struggle”, which it has done since its inception in 1998.

In a sign of strife in the state’s ruling party, TMC veteran and MP Kalyan Banerjee had said he doesn’t consider anyone else but Mamata Banerjee his leader. He had also criticised TMC national general secretary Abhishek Banerjee over some suggestions he made about tackling COVID-19.

Abhishek, the Lok Sabha MP from Diamond harbour, is a nephew of Mamata Banerjee. He has fast emerged as the unofficial No. 2 in the party, which apparently has not gone down well with some senior leaders.

Suvendu Adhikari, now with the BJP and currently holding the position of the Leader of the Opposition in the assembly, had quit the TMC as he felt marginalised in the party due to the growing clout of Abhishek Banerjee.

Abhishek Banerjee had, however, sought to downplay Kalyan Banerjee’s veiled attack on him on the leadership issue, stating that both of them agreed to the fact that Mamata Banerjee is their undisputed leader.

Following the controversy, Banerjee had directed all TMC leaders not to embarrass the party by airing their differences in public.

The Trinamool Congress held its organisational elections after a gap of five years.

According to TMC Secretary General Partha Chatterjee, Banerjee was declared elected without a contest as no other leader entered the fray.

“A total of 48 proposers and seconders had submitted nominations in favour of Mamata Banerjee. As there was no other nomination for the post of chairperson, Mamata Banerjee has been re-elected unopposed,” Chatterjee, the returning officer for the organisational polls, said.

Mamata Banerjee had founded the party in 1998 after breaking away from the Congress and has headed it ever since.

After two unsuccessful attempts at the hustings in the 2001 and 2006 assembly polls, the party came to power in 2011, defeating the mighty Left Front regime, riding the crest of massive public outrage against the Communists over a raft of issues including alleged forcible acquisition of farmland for industrialisation.

It stormed to power for the third consecutive term in May last year after bagging 213 out of the 294 seats in the state assembly.