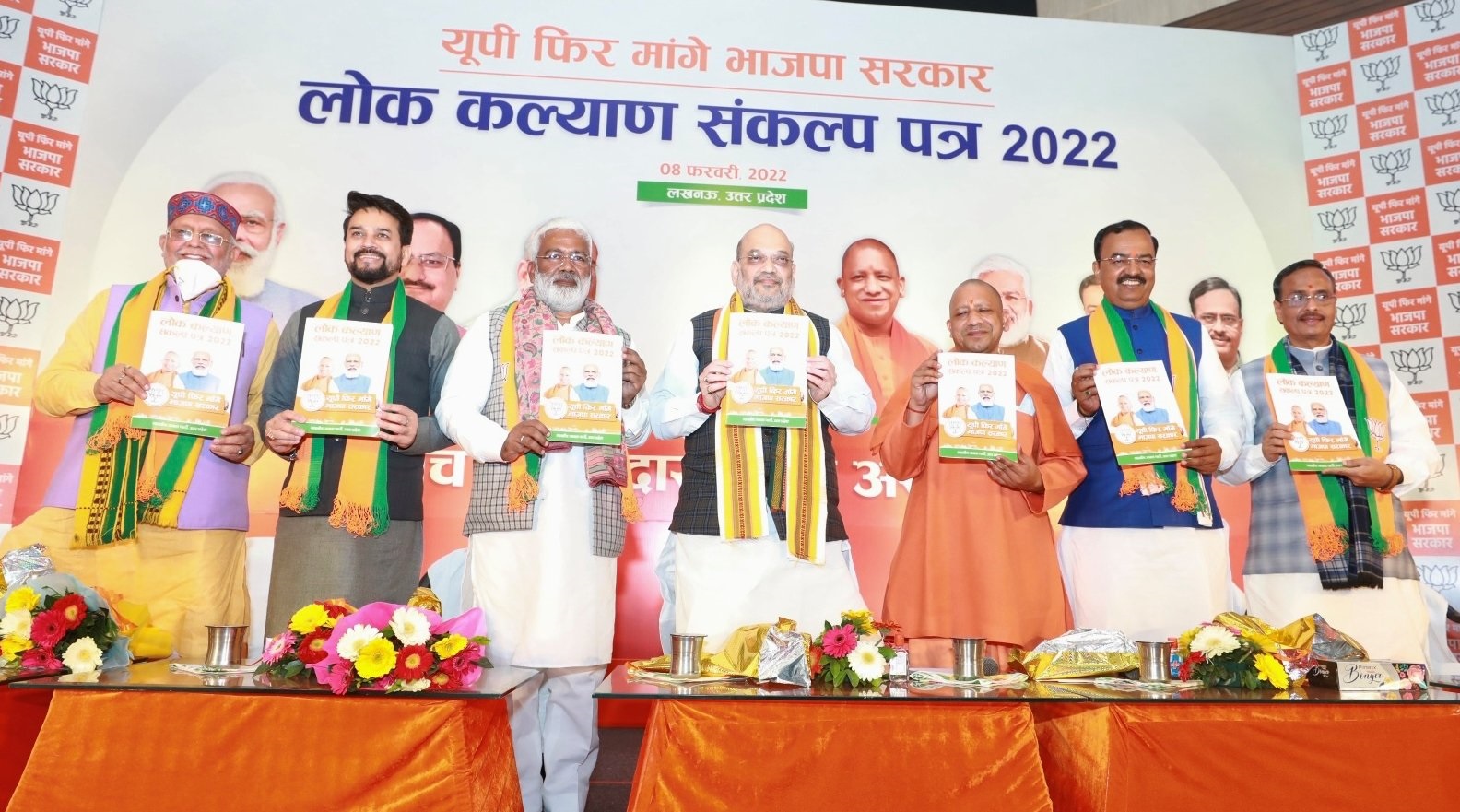 LUCKNOW: The BJP on Tuesday assured free electricity for irrigation, a job for every household and free travel for women over 60 in its Uttar Pradesh election manifesto, which also promised a minimum 10-year sentence in cases of what it describes as “love jihad”.

The announcements were made by Union Home Minister Amit Shah at the release of the ‘Lok Kalyan Sankalp Patra 2022’, just two days before the first phase of polling for the Uttar Pradesh Assembly.

Reaching out to farmers, the party promised free electricity for irrigation, speedier payment for sugarcane and strengthening the minimum support price (MSP) system for wheat and rice.

If farmers are not paid for their sugarcane within 14 days, the sugar mills will have to shell out the interest on the amount due, the ruling party’s manifesto promised.

It also announced that work on the establishment of an anti-terrorist commando centre in Deoband would be completed in the next five years. Similar centres would come up in Meerut, Rampur, Azamgarh, Kanpur and Bahraich.

The manifesto promised that the drive against criminals and mafias would continue. Also, a cyber helpdesk would be set up in every police station and separate barracks would be built for male and female police personnel.

The Lok Kalyan Sankalp Patra promised that if the BJP returns to power in Uttar Pradesh then the state’s anti-conversion law would be amended bringing in a minimum imprisonment of 10 years and a fine of Rs 1 lakh.

The current version of the law against religious conversion effected for marriage or through misrepresentation, force, undue influence, coercion, allurement or other allegedly fraudulent means, which the party describes as ‘love jihad’, invites a penalty of up to 10 years in jail.

At the release of the manifesto, Shah, while answering Akhilesh Yadav’s taunts that BJP did not fulfil any of its previous poll promises, said, “The party has fulfilled over 92 per cent of 212 promises made in its 2017 manifesto.” In the health sector, the BJP promised to build one well-equipped government hospital in every district and announced that Uttar Pradesh would be made tuberculosis-free by 2025.

Free scooty would be provided to meritorious girl students under Rani Laxmibai Yojana to make them self-reliant. Under the Swami Vivekanand Yuva Shashaktikaran Yojana, two crore tablets and smartphones will be distributed.

The BJP also promised to complete the General Bipin Rawat Defence Industrial Corridor in Bundelkhand in a record time.

Two LPG cylinders would be provided free of cost to every beneficiary of PM Ujjwala Yojna during Holi and Diwali festivals while mission pink toilet would be launched at Rs 1,000 crore to build toilets for women in public places.

The manifesto stated that under the Major Dhyanchand mission, sports infrastructure would be built or modernized in every government school and college besides while financial assistance would be given to sportspersons.

Uttar Pradesh would target to attract at Rs 10 lakh crore investment in the next five years and industrial regions would be modernized under Atal Infrastructure Mission, the ‘Sankalp Patra stated.

Also, ‘Babuji Kalyan Singh Gram Unnat Yojna’ would be launched for the integrated development of every village.

In furtherance of the BJP’s vision of ‘sabka saath sabka vikas’, ‘Maa Annapurna canteens’ would be established across the state to provide food to the poor at a subsidized rate.

The party also promised to set up Ramayan University in Ayodhya for research on subjects related to Lord Ram and other religious matters.

Lata Mangeshkar Performing Arts Academy would be set up to popularize folk dance, music and drama.

Making a comparison between the BJP government since 2017 and those before it, the manifesto said the Yogi Adityanath government waived loans of farmers to the tune of Rs 36.86 crore but that was not done by the previous dispensations.

Rs 90,000 crore was paid to farmers as sugarcane dues from 2012-17 which increased to Rs 1.57 lakh crore during the Yogi Adityanath government. A meagre number of jobs were created for the youth whereas five lakh youths were given employment without any discrimination after 2017, it stated.

Asserting that all promises mentioned in the manifesto would be fulfilled, Shah told mediapersons, “Whosoever comes before you in 2027, a detailed report card on fulfilment of all these promises will be given.”