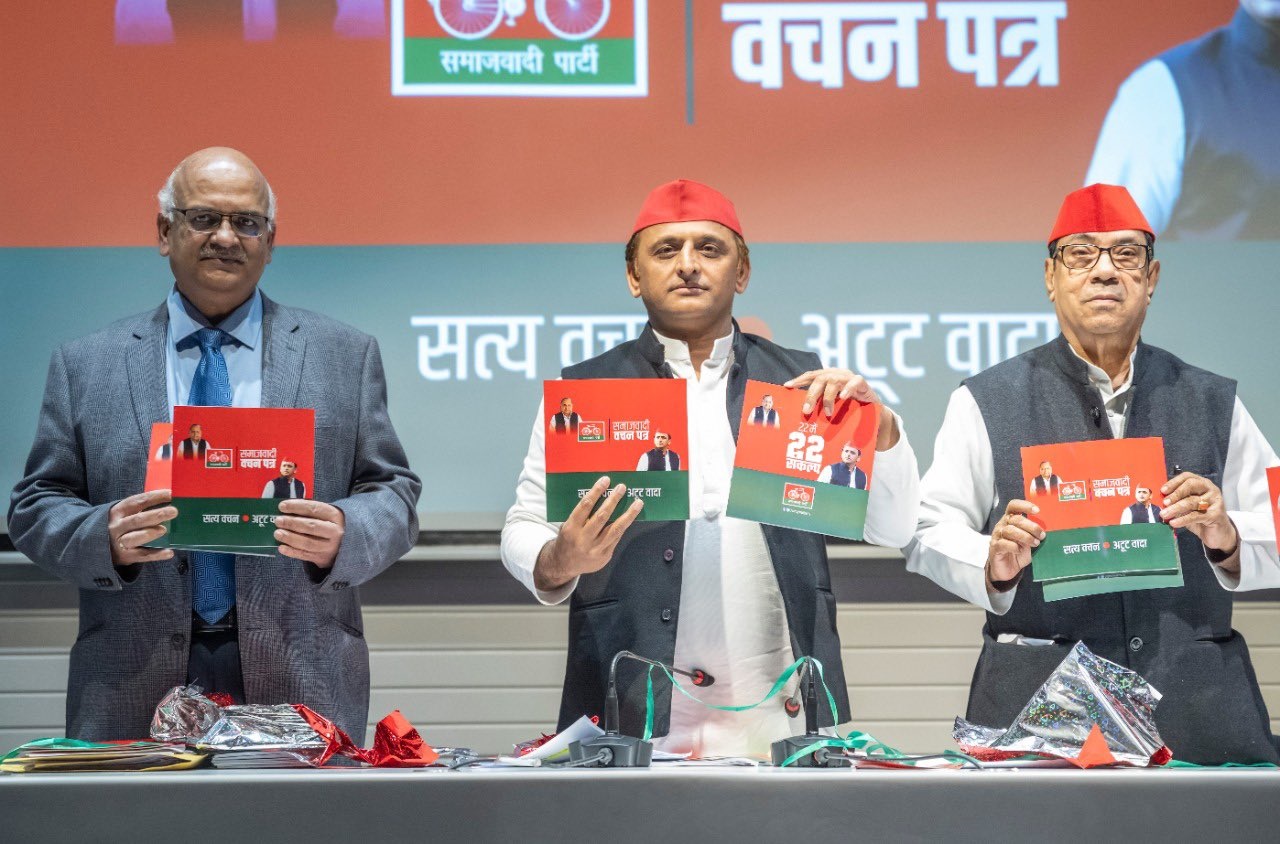 NEW DELHI: The Samajwadi Party (SP) on Tuesday released its poll manifesto, promising an ‘Urban Employment Guarantee Act’ on the lines of MNREGA and 33 per cent reservation for women in government jobs, besides a slew of benefits to farmers.

SP president Akhilesh Yadav said the “manifesto is aimed at taking Uttar Pradesh on the path of prosperity, development, and progress in the coming times”.

“I remember that in the year 2012, when the SP released its election manifesto, it was fully implemented. Many things which were not included in the manifesto were also implemented by the SP government,” he said, stressing his party’s commitment to working on the promises made.

The party released its manifesto — Samajwadi Vachan Patra — for the coming assembly elections, shortly after the BJP released its own.

SP promised to provide regular government jobs to ‘Shiksha Mitras’ within three years.
Employment to one crore people in the MSME sector.

Minimum support price will be provided to all crops and payment to sugarcane farmers will be ensured within 15 days.
For this, farmers’ corpus fund will be created if needed.

In manifesto, SP promised to make all farmers debt-free by 2025 and enact a debt relief law for the benefit of extremely poor farmers.

SP promised for all small and marginal farmers with less than two acres of land included two bags of DAP and five bags of urea, electricity for irrigation, interest-free loan, insurance and pension besides assistance of Rs 25 lakh to the kin of those “martyred” during the farmers’ movement.

SP promised to build a farmer memorial in the memory of “martyred farmers” and set up “Kisan Bazars” in all districts.

Party promised two LPG cylinders every year to BPL families, one litre of petrol to all two-wheeler owners, and three litres of petrol and six kg of CNG per month to auto-rickshaw drivers.

SP chief said an ‘Urban Employment Guarantee Act’ will be brought on the lines of MNREGA and the SP government will review and revive the IT sector so that 22 lakh people can be given employment.

The government will revive and encourage the MSME sector and transform it into an engine of growth so that one crore jobs can be created in the state by the year 2027.

On the formation of the SP government, appointments will be made on all the vacant posts in the state’s education system within a year and the short term and contractual recruitment system will be discontinued, Akhilesh Yadav said.

A special drive will be launched for the reinstatement of ‘Shiksha Mitras’ and doubling their training programme, he said, adding the remuneration of ‘Shiksha Mitras’ will be increased and they will be given regular government jobs within three years.

Reiterating his earlier promise of 300 units of free electricity, Yadav added that on being voted to power, his government would ensure a 24-hour power supply in the entire state.

The old pension scheme of government employees too will be restored after SP forms its government in the state, Akhilesh said.
Focus on English education under the state education policy and education will be provided in local languages to strengthen cultural identity.

Uttar Pradesh will be made a 100 per cent literate state by the year 2027.

Women will be given 33 per cent reservation in government jobs under which all sections of the general, economically weaker sections and women from scheduled castes and tribes will be included.

Women power line 1090 will be strengthened again with the facility of filing a case through email and WhatsApp.

SP promised free education to girls from KG to masters level and revive the Kanya Vidya Dhan Yojana under which girls after will be given a lump sum amount of Rs 36,000 passing class 12.

Party promised to restart the “Samajwadi Pension Yojana” under which the aged, needy and women living below the poverty line would get a pension of Rs 18,000 per year and said the benefit of this scheme would reach one crore poor families.

Akhilesh’s party mentioned it will set up “Samajwadi grocery stores” for poor workers, masons and homeless to get ration and other necessities at subsidised rates and start “Samajwadi Canteen” with the provision of “Samajwadi Thali” at Rs 10 to eradicate the problem of hunger.

SP chief also promised to set up “Dial 1890 Mazdoor Power Line” to solve the problems of migrant workers and start an annual pension of Rs 18,000 for artisans, labourers and unorganized sector workers.

SP chief promised to instal CCTV cameras and undertake drone surveillance in all villages and towns within a year and said all police stations and tehsils will be made corruption-free.

All policemen will be provided one day off per week and pending promotions will be cleared.

Apart from this, the SP-led government, if formed, will work with zero tolerance against organized ‘hate crime’ against women, minorities and Dalits, he said.

The SP manifesto also promised high-quality health facilities to all poor citizens through cashless health services with a three-time increase in the health budget of the state.