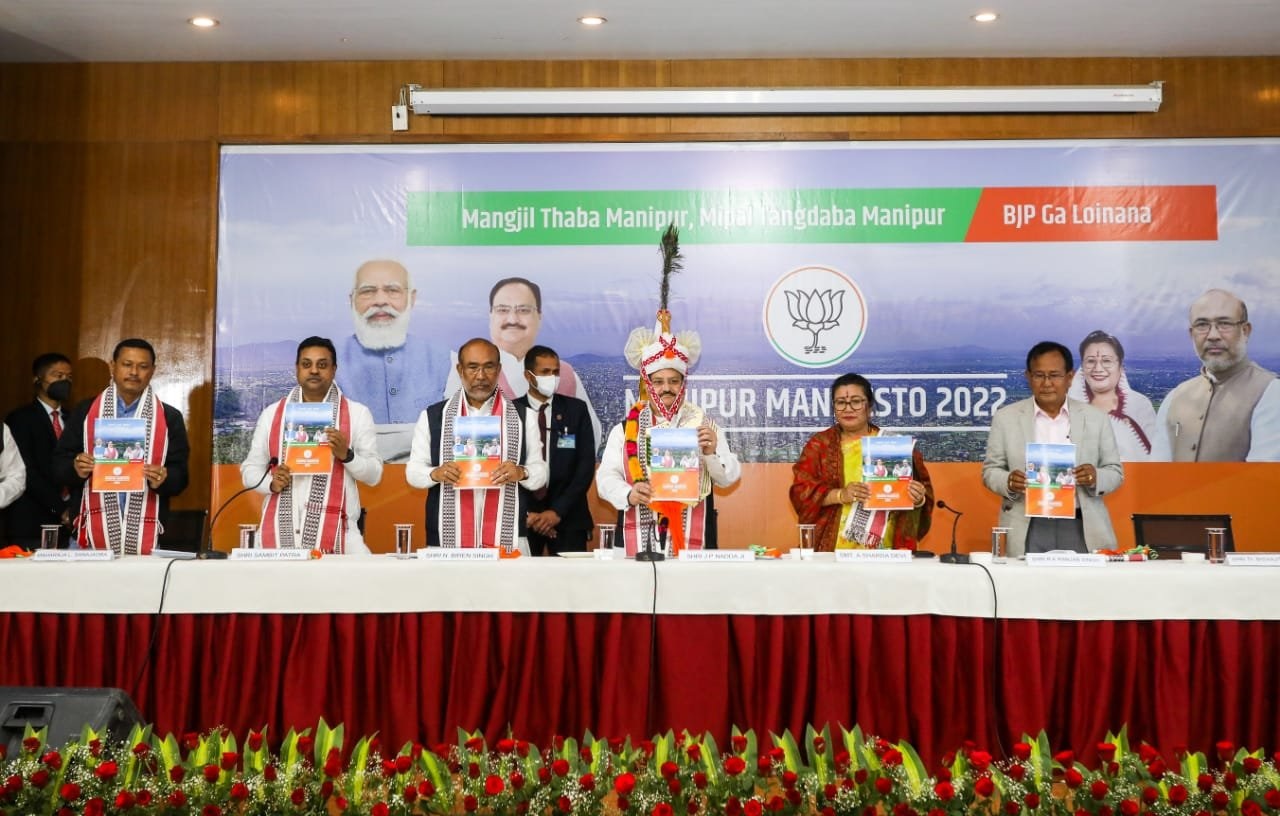 NEW DELHI: The BJP on Thursday released its manifesto for the assembly elections in Manipur, promising two-wheelers to meritorious female college students, increasing the monthly pension for senior citizens to Rs 1,000 and setting up a Rs 100 crore start-up fund.

The state has undergone a change from instability to stability and from stability to the big leap forward – we will ensure more development in the future. pic.twitter.com/uKVH2IfAY3

Releasing the manifesto, BJP national president JP Nadda said that under the leadership of Chief Minister N Biren Singh the state has headed towards development in the last five years, tackling the drugs menage and achieving stability with rule of law being established.

“Free scooty will be given to all meritorious college-going girls to empower the women of the state,” Nadda said, quoting the manifesto.

The BJP also promised Rs 25,000 to girls from economically weaker sections under the ‘Rani Gaidinliu Nupi Maheiroi Singi Scheme’ if voted back to power.

The party announced two free LPG cylinders per year to the beneficiaries of the PM Ujjwala scheme, and increasing the monthly pension for senior citizens from Rs 200 to Rs 1,000, if voted back to power.

“Laptops will be also be provided to all meritorious students who pass class 12, as a gateway to higher education,” Nadda said.

“Scholarships will be given to children of marginal, small and landless farmers, pursuing technical education at the graduate and post-graduate level,” he added.

The financial assistance of PM Kisan Samman Nidhi will be increased for the farmers of Manipur from Rs 6,000 to Rs 8,000 per annum, the party promised.

The BJP also announced setting up Manipur Skill Development University to train youths for making them job-ready, and an All India Institute of Medical Sciences (AIIMS) to ensure that people do not have to travel out of the state for medical treatment.

A Rs 100 crore ‘Start-Up Manipur Fund’ would be set to give zero-interest loans of up to Rs 25 lakh to entrepreneurs, the BJP promised.

The Loktak Mega Eco-Tourism project will become a reality, and cash incentives and subsidies would be given for setting up homestay facilities, to promote tourism in the Northeastern state, the BJP said.

“FO-FO Train” (Follow Foothills Train) — a peripheral rail network along the foothills of the state will be developed to boost tourism and increase allied vocational opportunities, the party said.

The BJP believes in good governance and the ‘Go to Village’ and ‘Go to Hills’ programmes will be expanded to reach government schemes at the doorsteps of the people, Nadda said.