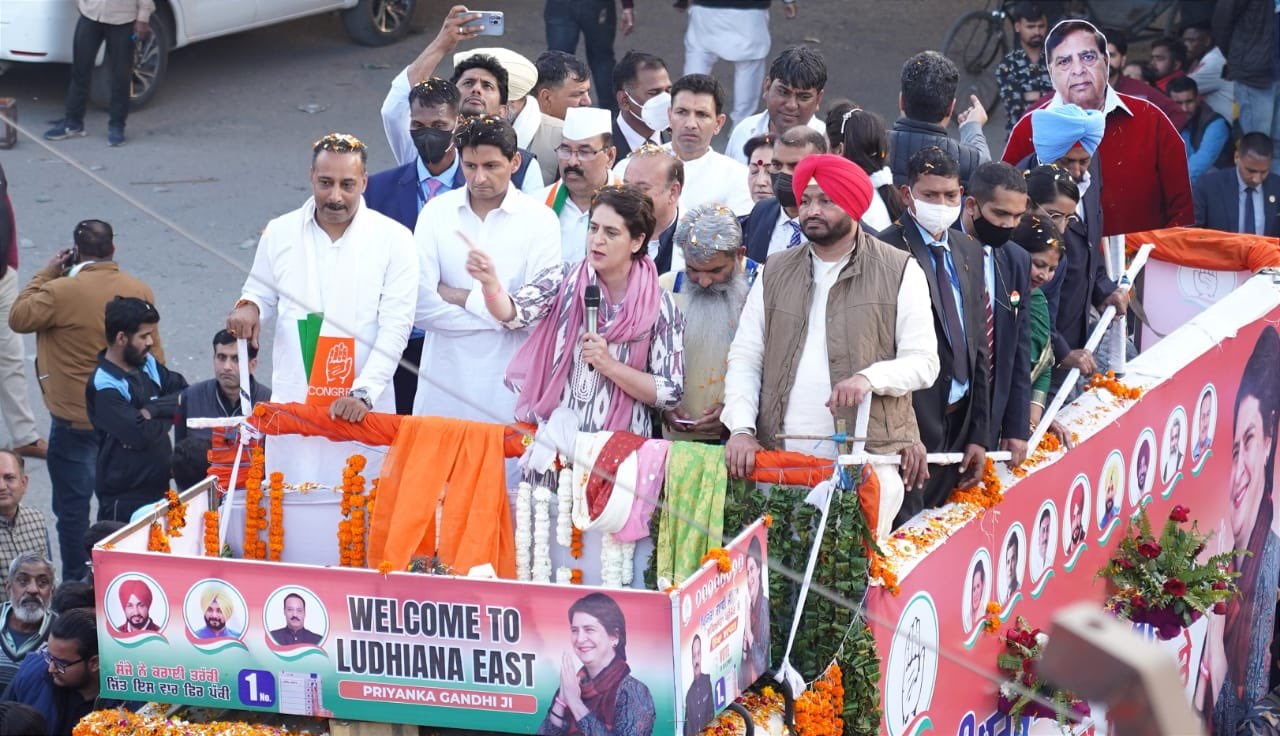 She also accused the Bharatiya Janata Party (BJP) and the Aam Aadmi Party (AAP) of using religion and sentiments for political gains.

“Modiji’s governance is only in advertisements. There is no governance in the country. Had there been governance, there would have been employment and no price rise.

“Had there been governance, PSUs, which generate employment, would not have been sold to his friends,” the Congress general secretary told reporters in Pathankot in poll-bound Punjab.

Addressing the “Navi Soch, Nava Punjab” rally of the Congress in Pathankot, she said poor people, small traders and small entrepreneurs in the country are facing several difficulties.

“Where is governance?” Priyanka Gandhi asked the gathering and claimed that an amount of Rs 2,000

crore is being spent on publicity.

Taking on the BJP and the AAP, she said “both use religion, sentiments to do politics. They are not doing development”.

She again alleged that the AAP has emerged from the Rashtriya Swayamsevak Sangh (RSS).

The Congress leader said Modi showcased the “Gujarat model” to come to power at the Centre and later, people realised what the reality of that model was, while Kejriwal talks about the “Delhi model of governance” and everyone saw how his government “utterly failed during the second COVID-19 wave. And this is when they say that they have done so much for the health sector”.

She said the Modi government spends thousands of crores of rupees on advertisements.

“Wherever you go, you will see the advertisements. In Uttar Pradesh, they have put up advertisements everywhere as if much development has taken place. But the truth is, unemployment is rising and several other sections are facing problems.

The governance of Modi and Kejriwal is only in advertisements, she alleged.

Farm laws were brought by “bade miyan” and the first one to notify those was “chote miyan”, the Congress leader said.

“How many jobs has Kejriwal given? The answer is 440 jobs have been given by his government,” she said while alleging that the AAP would do “anything to come to power”.

Some Congress leaders, including Navjot Singh Sidhu, have also sought a clarification from Kejriwal over allegations of supporting separatists.

However, AAP leader Raghav Chadha described the allegation levelled by Vishwas as malicious, unfounded and fabricated.

Priyanka Gandhi said she is married into a Punjabi family and knows what Punjabiyat means.

“When I heard Modi and Kejriwal talk about Punjabiyat, it made me laugh. I thought, how would they understand Punjabiyat? To understand it, one has to live it. Punjabiyat is a sentiment.

“Those who talk about Punjab and Punjabiyat before you, one of them has bowed before his billionaire friends and the other one is Kejriwal. For politics and power, he can bow before anyone,” she said.

The Congress leader said when farmers were protesting against three farm laws for a year at Delhi’s borders, Modi had time for foreign tours but could not travel a few kilometres to listen to their concerns.

“The prime minister came to Pathankot on Wednesday for campaigning, but when farmers were protesting against the farm laws, he could not travel a few kilometres from his house to meet them. They were made to sit on the road for a year.

“He toured the US, Canada and other countries, bought two planes for Rs 16,000 crore for himself, but the outstanding arrears of Rs 14,000 crore of the sugarcane farmers of the country were not paid,” she said.

“Seven hundred farmers died during their agitation, but the prime minister never went to meet them and ask why they were opposing those laws, what were their concerns,” she added.

The Congress in-charge for Uttar Pradesh also hit out at Modi for “sharing the stage with Union minister Ajay Mishra”, whose son is a key accused in the Lakhimpur Kheri violence case.

Referring to the minister’s son being released on bail, she said, “Now, he is out on bail. And Modi shares the stage with that minister. There is no shame. There is no understanding of Punjabiyat.”

Appealing to the people of Punjab to re-elect the Congress to power for providing a stable government, Priyanka Gandhi asked them to be wary of those seeking their votes in the name of religion, “while some others want to make you feel insecure and seek votes on that basis, but no one is talking about development or about your problems”.

Taking a dig at the AAP, she said even the Delhi Police does not come under its government.

“When the police is not under you and you cannot even clear files without the Centre’s permission…when you are not running a full government…what government will you run here?” she asked.

The Congress general secretary praised Chief Minister Charanjit Singh Channi, saying he did a lot of work that benefitted various sections of the society, despite his short tenure of 111 days.

In the evening, Priyanka Gandhi held a “Jansampark Abhiyan” in Ludhiana.