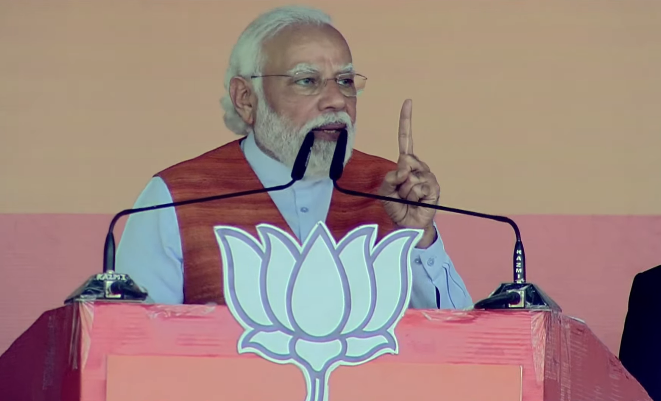 NEW DELHI: Targeting rival parties at an election rally in Uttar Pradesh on Sunday, Prime Minister Narendra Modi recalled the Ahmedabad bomb blasts and said some parties are sympathetic to such terrorists and accused the erstwhile Samajwadi Party government of seeking withdrawal of cases against those involved in terror attacks in the state.

Addressing the BJP rally in Hardoi, PM Modi said the people here have seen how the Samajwadi Party when in government gave a free hand to those using ‘katta’ (country-made pistols) and its cadres.

“People of Hardoi have seen those days when these people had given a free hand to those using ‘katta’ and those in ‘satta’ (power),” he said.

PM Modi recalled the 2008 Ahmedabad serial blasts which claimed 56 lives and left over 200 injured, and said some parties are sympathetic to such terrorists.

The erstwhile Samajwadi Party government in Uttar Pradesh even sought to withdraw cases against several terrorists, he charged.

On February 18, a special court in Ahmedabad in Gujarat had sentenced to death 38 members of terror outfit Indian Mujahideen (IM) in the serial blasts case. The court also sentenced 11 other convicts to life imprisonment.

Results of the seven-phase assembly elections in Uttar Pradesh will be announced on March 10.