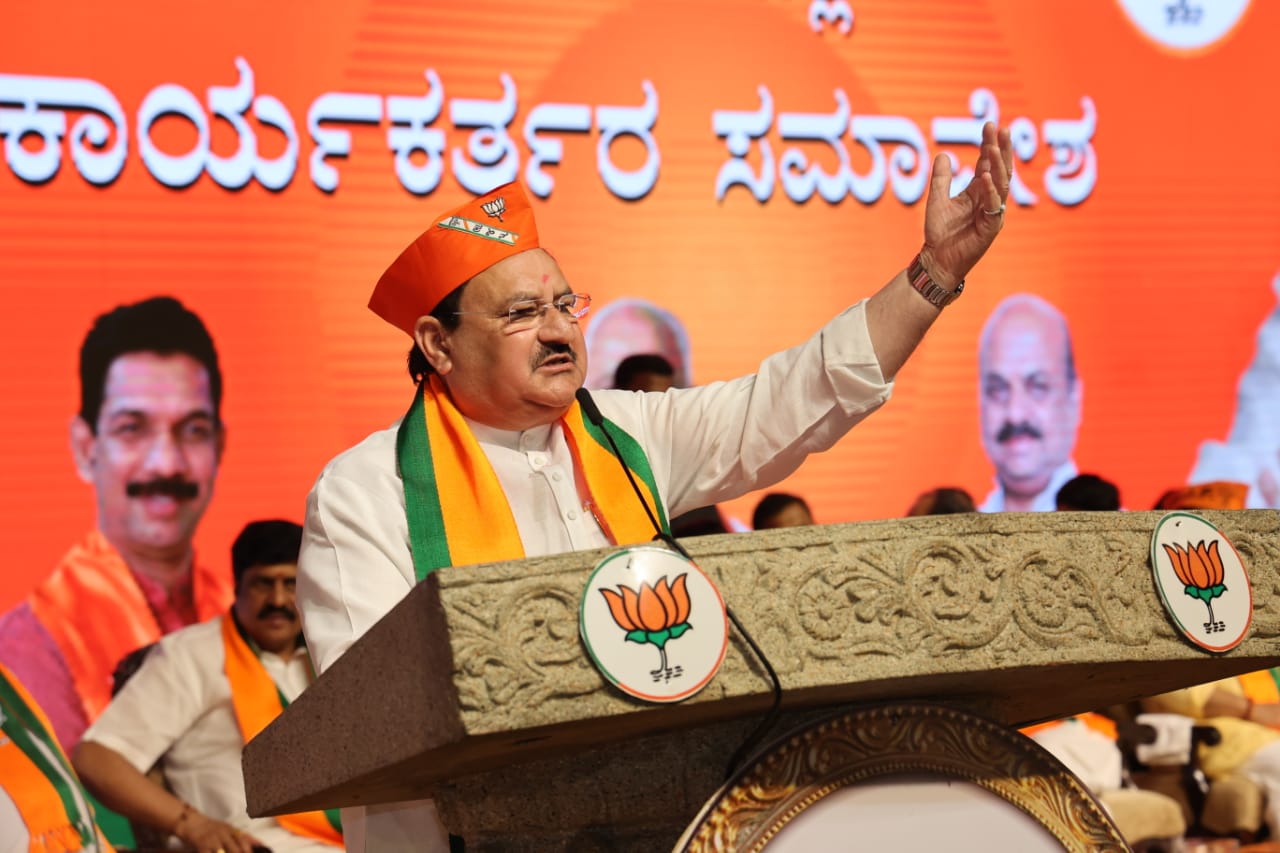 HOSPET: BJP national president J P Nadda on Sunday gave a clarion call to the ruling party workers in Karnataka, where assembly elections are due early in 2023, to become an instrument of change and ensure that the country moves forward.

He was addressing party men at the state executive committee meeting here. We are strongly pursuing our Mission Repeat’. We are marching with the Mantra of Nation First. Party Next and Self Last,’

Nadda said. You have to work with the motto: We are all dedicated and devoted with our mission to see that India goes forward and we are also ready to see that the party and I become the instrument of change.”

Karnataka is a land of industrious, conscientious and driven people, and we aspire to match these values, taking the state forward to new heights of glory. Our party workers who I addressed today during the Karyakarta Samavesh strive towards this goal of ours every single day. pic.twitter.com/GJKGz2b2wY

With an eye on the assembly polls in Karnataka just a year away, Nadda asked party leaders and workers to reach out to the masses and create awareness about the good work done by the BJP led government at the Centre as well as in the state.

He said the party’s vision and mission should be crystal clear that the workers and leaders are not after the chair, to become MLA, ministers or MPs, but to ensure that change takes place in the society.

Nadda also recalled the various schemes introduced by the Prime Minister Narendra Modi headed government that transformed the lives of people, including Swachch Bharat Mission, Ujjwala scheme, one nation one ration card’, and PM Kisan Bima Yojana. Asking the BJP cadres to gear up for the next election in the state, Nadda said, With the blessings of Modi and Yediyurappa and under the leadership of Chief Minister Basavaraj Bommai, this is the golden time of Karnataka where it can march towards development.

Noting that only BJP was the option to take the nation on the development path, Nadda said no leader in the Congress or regional party can explain what they are going to do for the people. Other parties have people talking about regionalism, language and caste, and to divide people, but they do not have even a few words to wipe the tears of poor, the BJP leader claimed.

On the party’s success in the recently concluded elections in four states, including UP, the BJP president said people used to claim that the BJP will lose the election but with the blessings of people, Chief Minister Yogi Adiyanath came to power again. After independence, this is for the first time that a chief minister has completed his five years tenure in Uttar Pradesh and he has again taken oath as the chief minister, he pointed out.

AAP will also become a dynastic political party very soon, Nadda claimed. Referring to the Indian National Congress, the BJP president said, It is neither Indian, nor National. It is reduced to a regional party confined to two states. It’s not a Congress anymore. Anyone who speaks against the leadership becomes anti-party. It is just a brother-sister party, Nadda said.