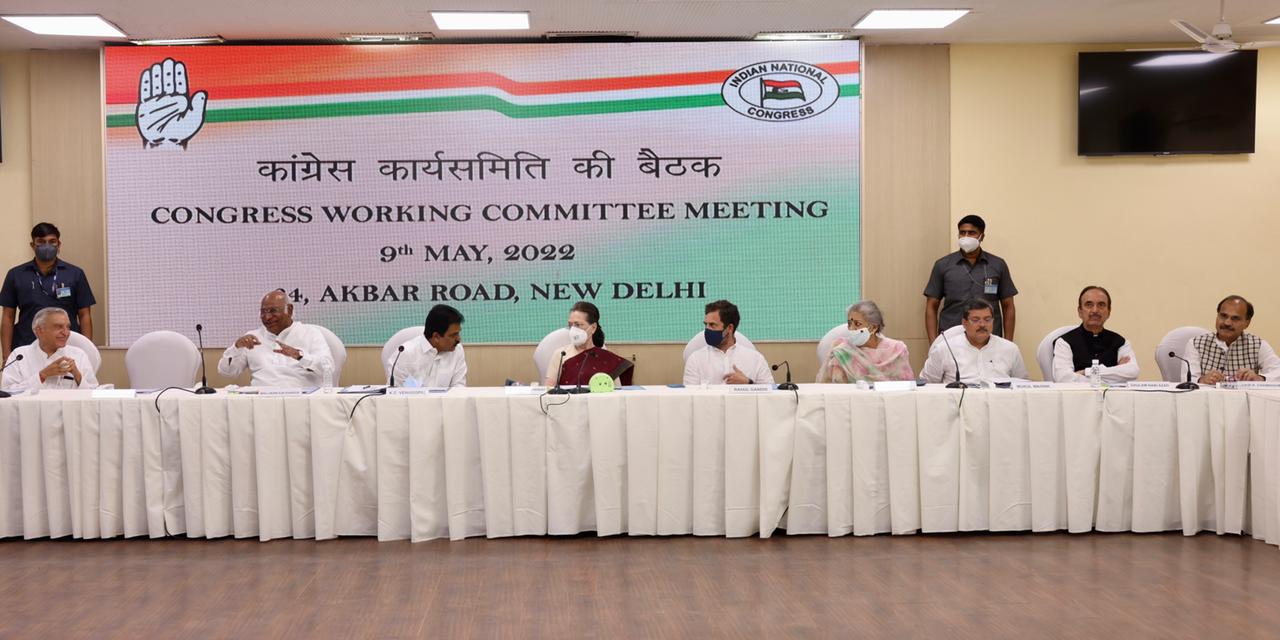 NEW DELHI: Sending out a clear message to critics within the organisation, Congress president Sonia Gandhi on Monday said self-criticism is needed in party forums but it should not be done to erode self-confidence and morale, as she asserted that it is time “to repay our debt to the party”.

Ahead of the Congress’ Chintan Shivir in Udaipur from May 13 to 15, she sought the cooperation of all leaders in sending across the message of unity, cohesion and commitment to ensure the party’s accelerated revival, while underlining that “there are no magic wands”.

Addressing top Congress leaders at the party’s working committee meeting, she said the Chintan Shivir should not become a ritual and it should herald a restructured organisation to meet the ideological, electoral and managerial challenges ahead.

“Self-criticism is of course needed in our party forums. But this should not be done in a manner that erodes self-confidence and morale and an atmosphere of gloom and doom prevails. To the contrary, we are beholden to put our heads together and together, collectively overcome the challenges that face us,” Gandhi said.

“This requires that the Chintan Shivir (brainstorming session) does not become a ritual, something we must just get through. I am determined that it should herald a restructured organisation to meet the many ideological, electoral and managerial tasks we confront,” she said.

The Congress chief said that “there are no magic wands”. It is only with selfless work, discipline and a sense of consistent collective purpose that “we will demonstrate our tenacity and resilience,” she said.

“The party has been central to the life of each and every one of us. It has expected our total allegiance and has been good to each and every one of us. Now, when we are at a crucial juncture, it is imperative that we step forward and repay our debt to the party in full measure,” Gandhi said at the party’s top decision-making body — Congress Working Committee (CWC) — meeting here.

In a press conference after the CWC meet, Congress leaders Jairam Ramesh and Randeep Surjewala said the aim of the shivir is to prepare a new action plan and road map to get the party battle-ready for the 2024 Lok Sabha and upcoming assembly elections.

“It is not a destination it is the beginning of a long journey. It is a milestone. After each of the Chintan Shivirs, the organisation has undergone transformation, this is a transformation of unprecedented magnitude,” Ramesh said.

He said there are serious challenges before the country, and the Congress and the people expect the party to play a role. “The fact that we are holding the shivir is in itself a message that the Congress president means business.”

Gandhi also talked about the deliberations to be held at the shivir which will be in six different groups – taking up political, economic, social justice, farmers, youth and organisational issues.

The Congress chief said delegates have already been informed about the groups in which they are expected to participate and on May 15, the party will adopt the “Udaipur Nav Sankalp” after it has been approved by the CWC there.

“I request your full cooperation in ensuring that the single over-riding message that goes forth loud and clear from Udaipur is one of unity, cohesion, determination and commitment to our party’s accelerated revival,” she said.

Gandhi said around 400 Congress members will be attending the shivir and stressed on the message of every leader holding one party post. The party has made every effort to ensure a balanced representation from every angle, she said.

Surjewala said the aim is to prepare a new constructive role for the Congress as an opposition party as per people’s aspirations, come true to people’s expectations by internalising transformations and bring forth a new resolve.

“The aim of the Nav Sankalp Shivir is to rise to the expectations of people after bringing about organisational changes, and come out with a new pledge to save the country,” he said, adding, that is why six separate groups were formed to take up the challenges on various fronts.

The conveners of the six groups gave detailed reports and plans, and CWC members discussed these as well as put forth their views, Surjewala said

Detailed discussions on all these issues will be held at the session in Udaipur, he said.
Ramesh said the session will help make the Congress a rejuvenated and strengthened party to deal with the political and other challenges before it. Organisational changes will also be an outcome of the shivir, he said.

“We are not going to Udaipur to draft an action plan to strengthen the Congress to deal with the political, economic, social and other challenges,” Ramesh said.

Fifty per cent of the delegates for the upcoming shivir are below 50 years of age and around 35 per cent are below 40 years. Twenty-one per cent are women, representing different sections of society, Surjewala said.

CWC members, including special and permanent invitees, state presidents, CLP leaders, former Union ministers, AICC secretaries and joint secretaries, all MPs, presidents of various AICC cells and departments, all national office-bearers of party wings, besides 50 party leaders who are part of the coordination panel or selected by party chief, are among the 422 invitees for the session, he said.

At the meet, the CWC approved an amendment in the party constitution to include digital membership and decided that Ladakh will have a separate Congress territorial wing.