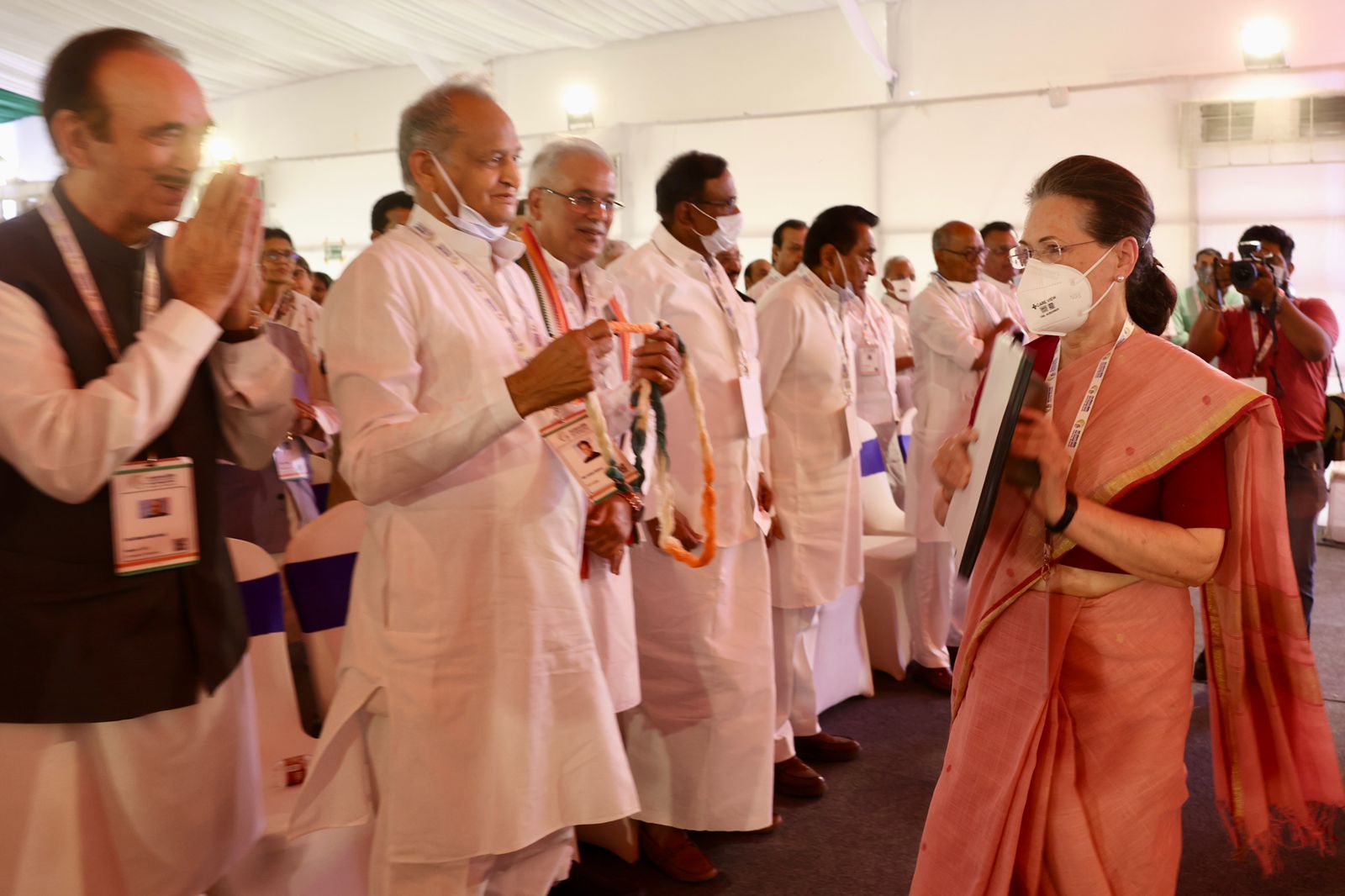 NEW DELHI: Congress president Sonia Gandhi on Friday called for urgent reforms in the party as “extraordinary situations demand extraordinary action” and also launched a blistering attack on Prime Minister Narendra Modi accusing him of keeping the country in a state of permanent polarisation, “brutalising” minorities and “threatening” political opponents.

Sending out a clear message to Congress ranks while launching the three-day brainstorming conclave, she said the party will have to change its style of functioning and urged them to keep the organisation above their personal ambitions and pay back their debt to the party as it had given a lot to everyone.

She urged around 450 delegates to deliberate with an open mind but send out a single message of a strong organisation, resolve and unity.

“In one way this (Congress transformation) is the most fundamental issue. Our revival is only possible through collective efforts. Such collective efforts will not be deferred. This Shivir is the start of the journey,” Gandhi said.

“The circumstances before our organisation are unprecedented. Extraordinary situations demand extraordinary action. I am fully alert to this. The organisation has to bring changes within itself, not just to stay alive but to move forward. We are in dire need of improvement and changing strategy,” she also said.

She stressed that the Congress’s revival would only happen with grand collective efforts and those cannot be put off.

Noting that this shivir in this journey is an important step, she noted, “We are not oblivious to the recent failures nor are we oblivious to the struggle we have to undertake to win. We are not unaware of the expectations of the people.”

The Congress president asserted that all have gathered to take a collective and individual resolve to bring the party in the same position it once had and play the role that people expected it to play in these “deteriorating circumstances”.

Taking on the government, she said, it has become “painfully clear” what Modi and his colleagues really mean by their frequently-used slogan ‘maximum governance minimum government’.

“It means keeping the country in a state of permanent polarisation, compelling people to live in a constant state of fear and insecurity. It means viciously targeting, victimising and often brutalising of minorities who are an integral part of our society and equal citizens of our republic,” she noted.

“It means using our society’s age-old pluralities to divide us and subverting the carefully nurtured idea of unity and diversity. It means threatening and intimidating political opponents, maligning their reputation, jailing them on flimsy pretexts and misusing investigative agencies,” Gandhi said.

She said it means eroding the independence and professionalism of all institutions of democracy.

Gandhi also accused the BJP-led government of “wholesale reinvention of history”, constant denigration of its leaders, especially Jawaharlal Nehru and the systematic move to distort, deny and destroy their contributions, their achievements and their sacrifices.

“It means glorifying the killers of Mahatma Gandhi,” the Congress chief said.

She also accused the Centre of “blatant undermining” of the principles the Constitution and its pillars of justice, liberty, equality, fraternity and secularism.

Gandhi alleged that the government was turning a blind eye to continued atrocities across the country on weaker sections, especially Dalits, Adivasis and women.

She also charged that the Centre was using fear to make the bureaucracy, corporate India, sections of the civil society and the media fall in line.

She said diversionary tactics were being used and questioned the “utter silence” on the part of the “ever so eloquent prime minister when the healing touch is most needed”.

Urging leaders to air their views frankly and openly during discussions at the three-day Chintan Shivir, she said, “I urge you to openly put forward your views, but only one message should go out and that is of a strong organisation, resolve and unity.”

She said the meet is also an occasion to deliberate on the many challenges ahead of us and bring organisational changes.
“It is both ‘Chintan’ about national issues and meaningful ‘atma chintan’ (self-introspection) about our party organisation,” she said.

The meet is being held at a time when the party is faced with a string of electoral defeats and is trying to strengthen itself by initiating organisational overhaul and deciding its strategy to make it future-ready for 2024 general and other state assembly elections.

The three-day conclave also comes amid calls by a section for bringing organisational overhaul and elections at all levels.