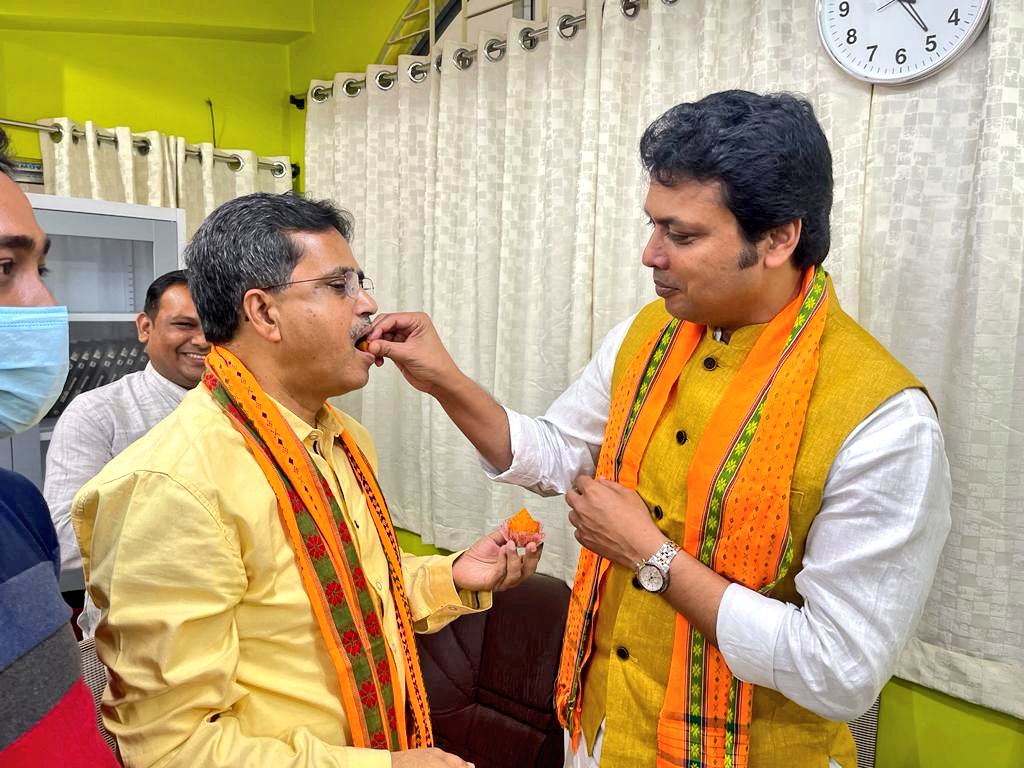 By Prashanta Barua
After months of will-they-wont-dry, BJP has shown the door to Biplab Kumar Deb, as Chief Minister paving the way for his chief acolyte Dr. Manik Saha hardly two months after the latter was sent to the Rajya Sabha. The senior dentist, whose acceptance as state BJP president fuelled deep resentment over the last 2 years. Now the resentment is worsening since the senior state leaders are quite unhappy with his new assignment. Saha gas already inducted 11 cabinet colleagues retaining all but dropping an (The Indigenous Peoples Front of Tripura) IPFT face following the widening rift within the ruling coalition partner.

Deb, 50 was replaced after the central leadership minutely scrutinized the state’s political landscape and not only because of his performance and image. The main ruling party which decimated 25 years of Left regime in 2018 has been grappling with multiple issues. The more the state leadership was trying to get rid of these the more the party in rank and file were caught into these.

Internal dissidence led by Sudip Roy Barman, did no less harm to the party. “We openly apprised the leadership of the widening rift between Deb and Roy Barman. But of no avail. Thus, we lost 3 MLAs. This is a big loss. But the party leadership downplayed the “loss,” said a senior BJP leader who is still in the party.

Emergence of Tipra Motha, is equally disrupting for BJP’s poll prospect. Pradyut Kishore Debbarman, the tribal royal scion is emerging in a big way in the tribal belt having considerable votes in at least 33 assembly constituencies. After his landslide victory in (Tripura Tribal Areas Autonomous District Council) TTAADC polls in 2021, he keeps pulling the huge crowd in a series of rallies as the warm -up session for the upcoming assembly polls. Focussing Greater Tipraland demand he is maintaining equidistance from major parties on a poll alliance. He promised alliance provided his demand is accepted.

BJP inducted Patal Kanya Jamatiya to counter Pradyut’s prospect. But the things remained unchanged. Now Pradyut Kishore Debbarman, who held a few rounds of informal discussions with Congress, has started talking of going it alone in around 40 seats. This is disturbing for Left and Right alike. “Now there is no scope for any pre-poll alliance with any party. We would go it alone in 2023,” said Pradyut Kishore Debbarman immediately after BJP inducted Patal Kanya with lots of hope (defying CM’s reluctance).

The resurgence of Congress following the induction of Sudip Roy Barman, is set to hurt BJP’s vote base in 7 to 8 constituencies. Many people who were unhappy with the treatment to Sudip Babu when he was in BJP, have openly come in support of Congress.
“Most of these people voted BJP to power in 2018. Now they won’t go with BJP and thru prefer Congress only because of Sudip Roy Barman,” said a senior journalist based in Agartala.

Mishandling of law and order situation frequently invited no less wrath from the courts. Cojudgmentment on the arrest of lawyers and journalists under(Unlawful Activities (Prevention) Act) UAPA was no less embarrassing for both the state and Centre. “The situation has deteriorated to such an extent that no Opposition party could hold anything. Goons are hired and later protected,” said TMC leader Subal Bhowmik recently.

The most nefarious attack on Sudip Roy Barman allegedly by a section of violent BJP workers further worried the leadership. “Deb was given lots of advantages unlike many other CMs. But the result was not encouraging,” said a party insider.

Last year the central leadership dispatched Kishore Barman to strengthen party bases since his role was key in the party’s astounding in North Bengal in 2021. But Barman allegedly was not given enough scope to do these.

Left Front’s regaining popularity is yet another concern for BJP ahead of elections. The party managed to take out huge processions alleging anti-people policies much to the utter disappointment of BJP central leadership.

IPFT, BJP’s coalition partner is also losing ground which is why most of the senior leaders want to withdraw from the coalition. But a final decision is still pending. It drew blank in the TTAADC polls in 2021.

Manik Saha, the imported BJP leader is now taking over as Chief Minister who is closed to Deb.

Deb, a doctor turned Congressman joined BJP just a couple of months before he was made the state BJP president allegedly violating party rules. A group of 12 senior party leaders 2 months back demanded his removal. But was spared only because of Deb.

But will these measures be able to retain BJP’s eroding base till 2023? Will BJP be able to overcome internal diffidence, the resurgence of TMC and Congress and the emergence of Tipra Montha? Lots still remain unanswered.