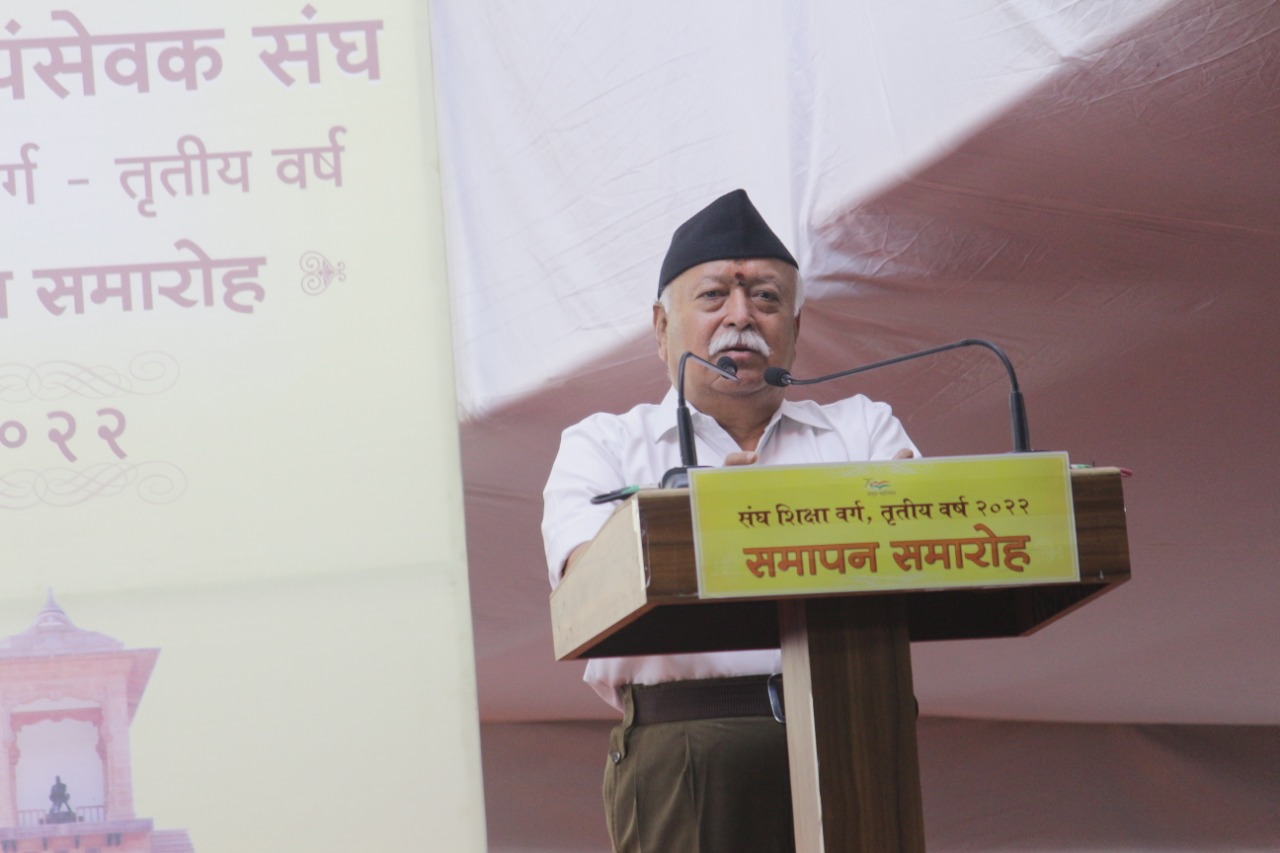 NEW DELHI: In significant remarks amid the Gyanvapi mosque row, Rashtriya Swayamsevak Sangh (RSS) chief Mohan Bhagwat on Thursday said that matter is ongoing, history cannot be changed and neither today’s Hindus nor today’s Muslims created it. He also said “we shouldn’t bring out a new matter daily” and “why look for a Shivling in every masjid”.

“Gyanvapi matter is ongoing. We can’t change history. Neither today’s Hindus nor today’s Muslims created it. It happened at that time. Islam came from outside via attackers. In the attacks, Devsthans were demolished to exhaust the morale of those who wanted India’s independence,” Bhagwat said at the conclusion ceremony of an organisaiton training programme in Nagpur.

He said the dispute should not be escalated. “We shouldn’t bring out a new matter daily. Why should we escalate dispute? We have devotion towards Gyanvapi and we are doing something as per that, it is alright. But why look for a Shivling in every masjid?” he asked. Bhagwat said that the ancestors of today’s Muslims were Hindus too.

“Issues were raised over places in which Hindus have a special devotion. Hindus don’t think against Muslims. The ancestors of today’s Muslims were Hindus too. It was done to keep them forever devoid of independence and suppress morale. So Hindus feel they (religious places) should be restored,” he said. The RSS chief emphasised mutual agreement and said issues should not be viewed with mutual antipathy.

“If there are issues in mind, it rises. It is not against anyone. It should not be considered like that. Muslims should not consider it like that and Hindus too should not do that either. There is something like that, find out a path through mutual agreement,” he said. Bhagwat said if courts are approached, then the judicial verdict should be accepted and questions should not be raised.

“A path does not always come out. People approach the court, and if it is done then whatever the court decides should be accepted. We should abide by the decisions, considering our judicial system pious and the supreme. We should not question its decisions,” the RSS chief said. He said RSS is not opposed to any form of worship and considers all of them holy.

“We have no opposition against any form of worship, we accept them all and consider all of them holy. They may have adopted that form of worship but they are descendants of our rishis, munis, Kshatriyas. We are descendants of the same ancestors,” he said. The Varanasi District Court on Monday deferred till the July 4 hearing on the Anjuman Intezamia Masjid Committee’s plea challenging the maintainability of a suit filed by Hindu women in the Gyanvapi case.

The arguments by the Muslim side, seeking rejection of civil suit’s claims on Gyanvapi mosque, could not be completed and it will continue on July 4. The District Court Judge, while fixing the hearing on the maintainability of the Gyanvapi-Shringar Gauri complex case, said that the matter will be heard as per directions of the Supreme Court.

The Hindu side has claimed that a Shivling (a representation of Lord Shiva) was discovered inside the mosque premises and the Muslim side claimed that the structure was part of the fountain at the mosque’s wuzu khana area. Five Hindu women have sought round-the-year access to pray at “a shrine behind the western wall of the mosque complex”. (ANI)