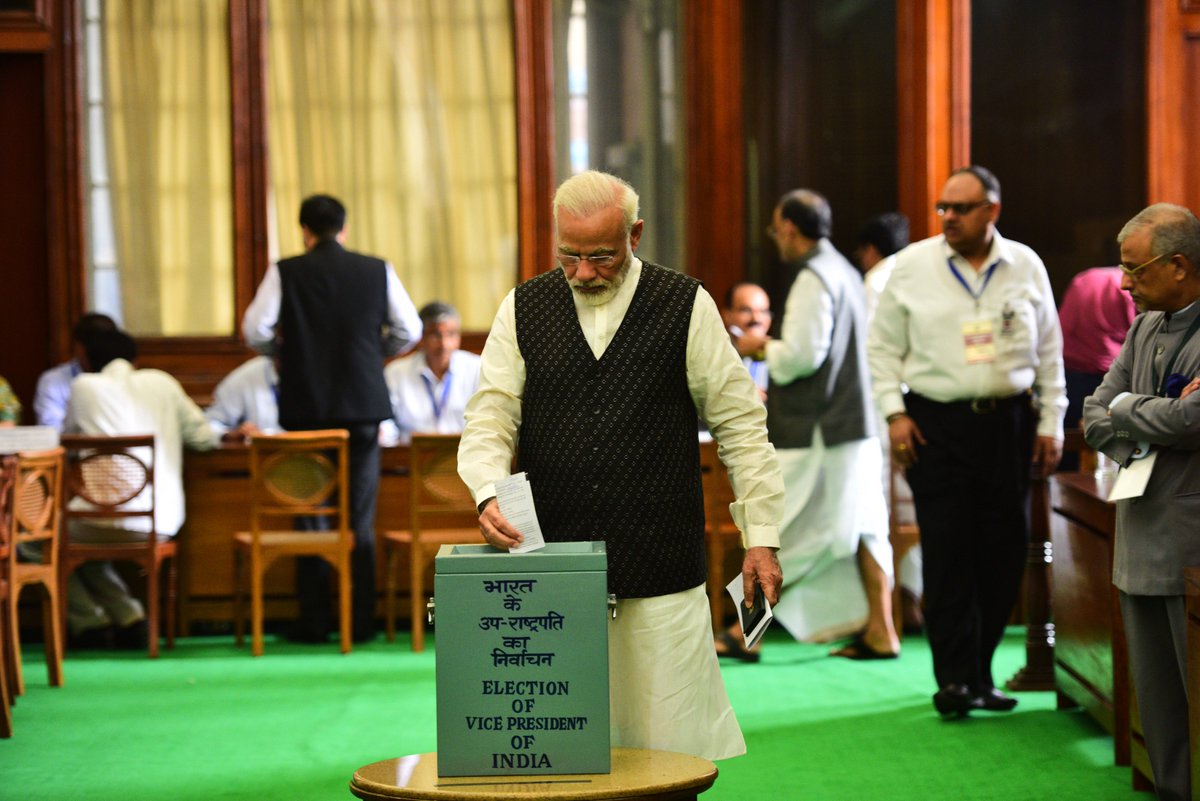 NEW DELHI:Setting in motion the process for the 16th presidential election, the Election Commission on Thursday said anyone desiring to contest would need 50 electors as proposers and 50 others as seconders — a move aimed at weeding out non-serious candidates in these polls that once saw nominations getting rejected for 36 out of total 37 candidates.

Besides, the candidate would need to deposit an amount of Rs 15,000 as security.

The security deposit was increased from Rs 2,500 to Rs 15,000 in 1997, when the total numbers of proposers and seconders were also increased from 10 each earlier.

Also, a candidate must be a citizen of India and should have completed the age of 35 years, besides being qualified for election as a member of the House of the People. The President has a term of five years.

According to the Election Commission, a person shall not be eligible for election as President if he or she holds any office of profit under the government of India or the government of any state or under any local or other authority subject to the control of any of the state governments.

However, a person will not be deemed to hold any office of profit by reason only that he or she is the president or vice-president of the Union or the governor of any state or is a minister in the central or any state government.

To be held on July 18, this would be the 16th presidential election while the first one was in 1952.

The experience of the first five elections showed that some persons offered themselves as candidates for the office of the President without even a remote chance of getting elected.

Another matter of concern was the manner in which some persons approached courts of law challenging the election to the office of the President.

No elector can subscribe, whether as proposer or as seconder, more than one nomination paper in an election, and if one does so, his or her signature will be invalid on any nomination paper other than the one first delivered.

Also, not more than four nomination papers can be filed by or on behalf of a candidate or received by the returning officer.

An election petition calling in question an election to the office of the President may be presented within 30 days from the date of the declaration of the result to the Supreme Court by any candidate, or any 20 or more electors joined together as petitioners.

The security deposit will be forfeited if the candidate is not elected and the number of valid votes polled by him or her is less than one-sixth of the number of votes necessary to secure return of a candidate at such election.

In other cases, the deposit will be returned to the candidate.

In the first presidential election in 1952, which Rajendra Prasad won, there were five contesting candidates with the last one getting only 533 votes.

The second election in 1957, which was also won by Prasad, had three contesting candidates.

The third election also saw only three contestants, but the fourth election in 1967 saw as many as 17 contestants with nine getting zero votes and five getting less than 1,000 votes. In comparison, the winner of 1967 election, Zakir Hussain, secured more than 4.7 lakh votes.

The fifth election had 15 contestants with five failing to secure even a single vote. This election in 1969 had many firsts, including strict secrecy of voting and allowing some MLAs to cast their votes at Parliament House in New Delhi instead of their state capitals.

At that time, the decision to have a gap of four days between the date of the poll and the date of counting faced some criticism. Some critics had also said the votes should have been counted at the state capitals themselves instead of being brought to Delhi.

It was for the sixth election in 1974 when the Election Commission first decided to introduce several measures to discourage non-serious candidates. The election had only two contestants.

For the seventh election in 1977, total 37 candidates filed their nominations.

On scrutiny, the returning officer rejected the nominations filed by 36 candidates and only one validly nominated candidate remained in the field, Neelam Sanjiva Reddy.

Neither the preparation nor publication of the list of contesting candidates for taking the poll therefore became necessary and Reddy was declared elected unopposed after the last date of withdrawal.

The 1987 election also witnessed one candidate, Mithelesh Kumar Sinha, who eventually came third with 2,223 votes, requesting the Commission for facility to put forth his views over AIR/Doordarshan.

Under a scheme evolved by the Ministry of Information and Broadcasting, in consultation with the Election Commission in 1977, such broadcasting or telecasting facilities are afforded to recognized political parties during general elections to Lok Sabha and State Assemblies. However, these facilities are not extended to other elections.

Another candidate, V R Krishna Iyer also reportedly had requested the Minister of State for Information & Broadcasting (Ajit Kumar Panja) that the three contesting candidates should be given the opportunity to express their views over AIR/Doordarshan.

But, the government reportedly did not accept the request and accordingly no candidate was allowed facility of broadcasting/telecasting their views.

There have been only two contestants since the 11th presidential election held in 1997, when the security deposit and the numbers of proposers and seconders were increased significantly.

In this article:India, Presidential polls