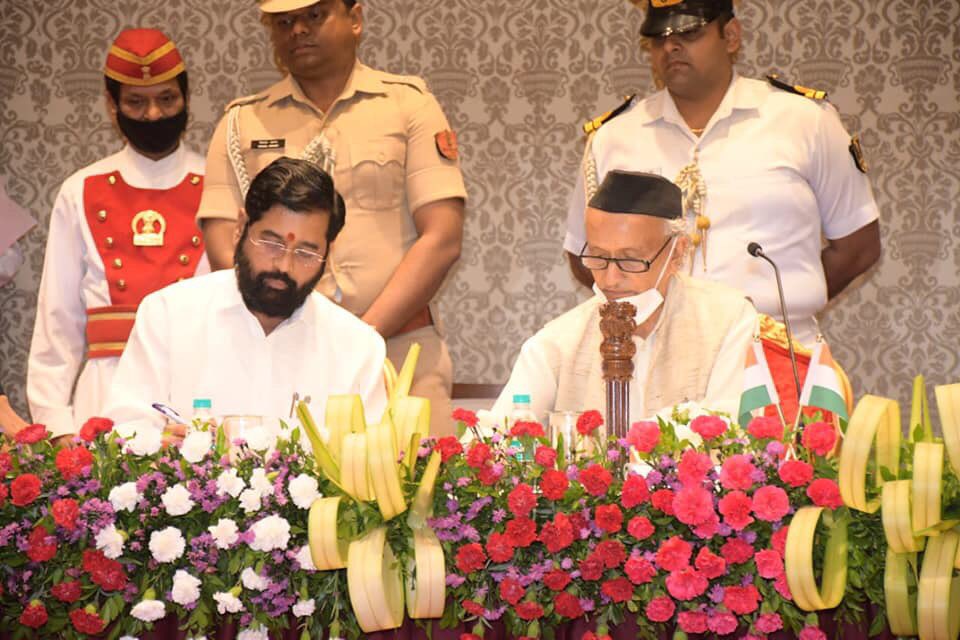 NEW DELHI: Shiv Sena leader Eknath Shinde was on Thursday sworn in as the 20th chief minister of Maharashtra, while BJP stalwart Devendra Fadnavis took oath as the deputy chief minister, capping a day of surprises and hectic political activities, just 24 hours after the collapse of the Maha Vikas Aghadi (MVA) government.

In a surprise move, Fadnavis announced in the evening that Shinde, who led the rebellion in the Shiv Sena, will be the new chief minister, while he himself will be out of the new government, only to change his stand and become the deputy CM following prodding from his party’s central leadership.

Governor Bhagat Singh Koshyari administered the oath of office to Shinde and his deputy Fadnavis at the Raj Bhavan in South Mumbai shortly after 7.30 pm.

Earlier, BJP president J P Nadda said Fadnavis would be part of the new Maharashtra cabinet led by Shinde, minutes after Fadnavis announced he will not be in the government.

“Development of the state is my priority. I will take all sections of society along with me,” Shinde said after the ceremony.

The new CM was accompanied by his family members to the inauguration. However, his son Shrikant Shinde, the Lok Sabha MP from Kalyan in Thane district, is staying with the rebel Shiv Sena MLAs in Goa, where they had arrived from Guwahati on Wednesday night, nine days after the rebellion that pulled down the MVA government.

“Shinde always took care of his supporters and party workers. For the first time, a legislator from Thane district has become the chief minister. We are delighted for this decision,” said a supporter.

The Sena leader, hailing originally from a village in Satara district in western Maharashtra, is the MLA from Kopri-Pachpakhadi in Thane city.

Some Shinde supporters took out a motorbike rally in Thane and shouted slogans hailing their leader, who is known as a mass leader, often mingling with his voters and hearing their grievances besides holding regular meetings with local Sena workers and functionaries.

Eknath Shinde on Thursday became the fourth chief minister of Maharashtra who hails from Satara district.

NCP chief Sharad Pawar, who himself has roots in the western Maharashtra district, noted this in a tweet congratulating Shinde. While Shinde cut his teeth as a Shiv Sena leader in Thane near Mumbai, he hails from Dare Tamb village, 60 km from Satara city.

Before him, the state had three chief ministers from the district: Yashwantrao Chavan (the first CM of the state), Babasaheb Bhosale and Prithviraj Chavan. While Pawar, another former CM, is mainly associated with Baramati in Pune district, the NCP leader told reporters that his family has roots in Koregaon tehsil of Satara.

“After late Yashwantrao Chavan, Shree Babasaheb Bhosale and Shree Pritiviraj Chavan, another Satara-kar has taken over as the Chief Minister,” Pawar tweeted earlier in the day. Vijay Mandake, a senior journalist from the district, said leaders from Satara have always been influential in state politics.

Ganesh Utekar, a Shiv Sena leader from the district and resident of Shinde’s native Dare village, said it was a pleasant shock for all of them when BJP leader Devendra Fadnavis announced Shinde as the next CM. “Everybody in the village is celebrating the development,” he added. Shinde, who completed his primary education in a local school, visits the village regularly and does not miss the annual village fair, Utekar said.

A two-day special session of the Maharashtra legislature will be held from July 2. The decision was taken in the first cabinet meeting held after Eknath Shinde took over as the new chief minister of the state, officials said. On the first day of the session, election to the post of Assembly speaker will be held, they added. A trust vote was also likely to be held during the session, sources said, though there was no official communication in this regard.

Shinde told officials in the meeting that development projects need to be expedited. Elected representatives and the administration need to work hand in hand, he was quoted as saying in the official statement. “We need to live up to the faith of the citizens,” the CM said. Shinde also said that having an experienced hand like Deputy chief minister Devendra Fadnavis in the cabinet will help his administration. “Metro and Samruddhi expressway projects should be expedited,” the chief minister said. Fadnavis asked the bureaucracy to expedite administrative decisions, the statement said.

The chief minister and his deputy also took stock of the ongoing sowing operations in the state.