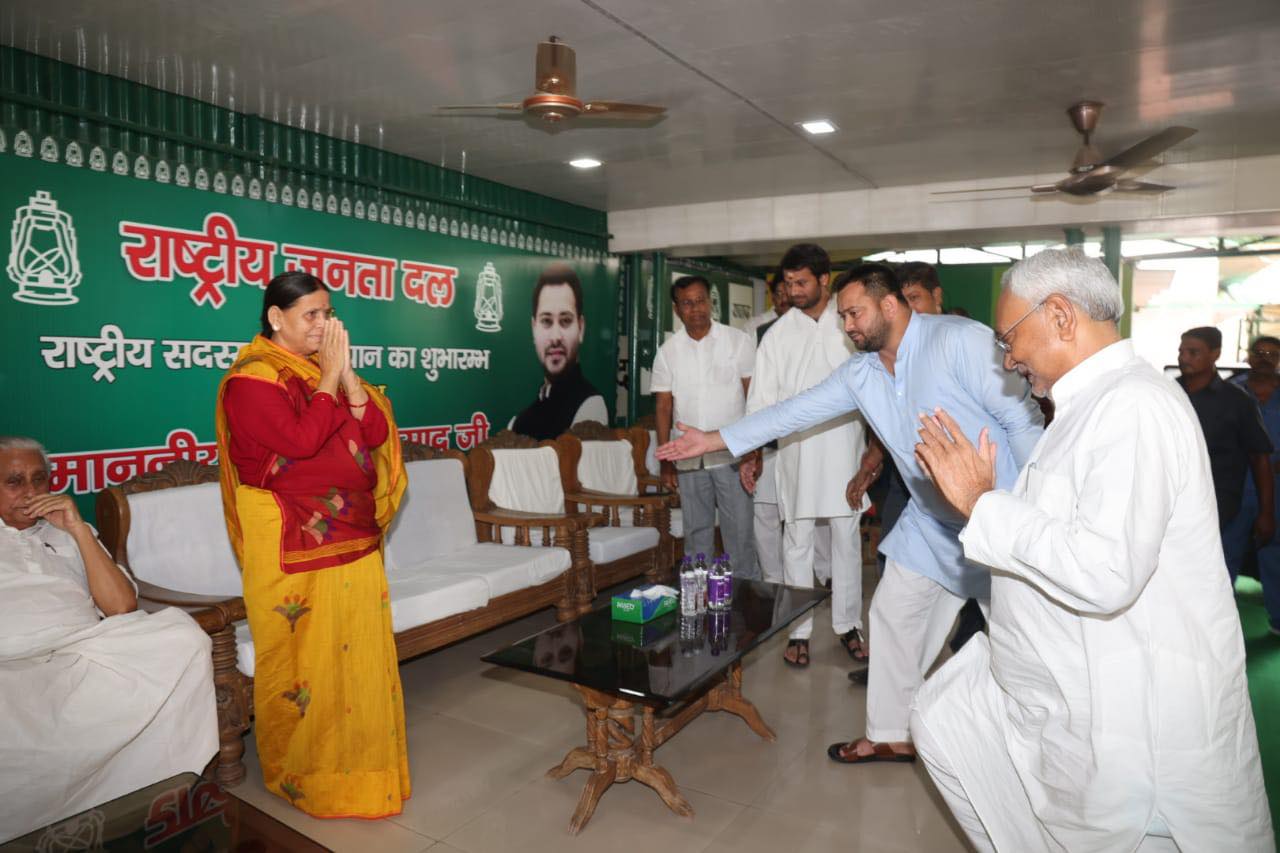 NEW DELHI: Nitish Kumar, once seen as a potential rival to Prime Minister Narendra Modi, broke ranks with the BJP-led NDA coalition Tuesday to stake claim as head of the rival ‘Mahagathbandhan’ (Grand Alliance) to be chief minister of Bihar for the eighth time.

Kumar, 71, who earlier in the day submitted his resignation as the chief minister heading the NDA coalition, said he submitted a list of 164 MLAs to Governor Phagu Chauhan who will decide when the oath-taking can take place.

The effective strength of the state Assembly is 242 and the magic figure is 122.

RJD’s leader Tejashwi Yadav will be the deputy chief minister and the new cabinet will have representatives from the RJD and Congress besides JD(U), according to sources. The Left parties are likely to give outside support to the new government “retaining their independent identity”.

Kumar and Tejashwi Yadav will be sworn in as the Chief Minister and Deputy CM respectively at 2 pm on Wednesday in Raj Bhavan.

Besides upsetting political calculations, the move is seen as significant as it diminishes the clout of the BJP in a key state in the Hindi-speaking heartland from where most of its legislators come ahead of the 2024 general elections, which pundits expect it to otherwise win.

Kumar told newspersons outside the Raj Bhavan, “It was decided at the party meeting that we quit the NDA. I have, therefore, resigned as the NDA’s Chief Minister”.

After weeks of simmering tension between the JD(U) and BJP over a host of issues including caste census, population control and the ‘Agnipath’ defence recruitment scheme and a tiff over the continuation of Kumar’s former confidante RCP Singh as a central cabinet minister, Tuesday morning saw all MPs and MLAs of the regional party huddled in conference at the chief minister’s residence.

The decision they took was to quit the NDA and join hands with the Mahagathbandhan which it had spurned five years back in 2017.

The CM is understood to have told party legislators and MPs that he had been driven against the wall by the BJP which tried to weaken his JD(U), first by propping up Chirag Paswan’s rebellion and later through the party’s former national president RCP Singh.

Singh was made a cabinet minister at the Centre without Kumar’s explicit agreement. Consequently, when his term as a Rajya Sabha member ended, the JD(U) refused to give him another term as an MP, thus ending his stint as cabinet minister as well.

Following this, rumours of a split in the JD(U) engineered by Singh’s supporters surfaced.

CPIML (Liberation) general secretary Dipankar Bhattacharya had told PTI on Monday the crux of the row between JD(U) and BJP also stemmed from the recent statement by J P Nadda, president of the saffron party, who said regional parties “have no future”.

A meeting of the RJD-led Grand Alliance, also comprising the Left and the Congress, took place at Rabri Devi’s house, across the street from the chief minister’s residence at about the same time which decided to support Kumar as chief minister once he quit the NDA.

After submitting his resignation letter, Kumar went over to Devi’s house to arm himself with letters of support from the Mahagathbandhan and drove back to the Governor’s house along with RJD leader Tejashwi Yadav to stake claim to form a new government.

Supporting the claim are the JD(U) which itself has 46 MLAS (45 party MLAs and 1 Independent) and the RJD which has 79 legislators. The Congress which has 19 while the CPI(ML) has 12 MLAs, CPI – 2 and CPI(M) another 2 have also given him letters of support. The HAM party which 4 MLAs has also thrown in its lot with Kumar.

That the plans had been finalised long before the dice was cast was obvious from the sequence of events, said political observers. Several meetings over Iftar and other social occasions had cemented ties between Kumar and Yadav.

Even as the meeting was going on, senior leader Upendra Kushwaha in a tweet congratulated Kumar for leading a “new coalition in new form,” implicitly acknowledging the split and embracing the RJD-led ‘Mahagathbandhan’ (Grand Alliance) to continue in office.

The BJP on Tuesday reacted angrily, accusing Bihar Chief Minister Nitish Kumar of “insulting and betraying” people’s mandate while blaming his prime ministerial ambition for the JD(U)’s decision to walk out of the NDA.

The party’s leaders also threw the jibe “Paltu Ram” (one who keeps changing sides), first used by Rashtriya Janata Dal supremo Lalu Prasad Yadav for Kumar, at the Janata Dal (United) leader and rejected claims that their party had tried undermining him.

“Despite having fewer seats, we made him (Kumar) chief minister. He has deceived the people twice. He is suffering from arrogance,” Ashwini Choubey, BJP‘s central minister said.

Nitish Kumar had deserted the NDA for the first time in 2013 after Narendra Modi became the coalition’s Prime Ministerial candidate and then again ditched his coalition with the RJD-Congress combine in 2017 to walk back into the NDA camp.

“Nitish’s move today is a new chapter in one form of federalisation of politics (where regional parties are taking control of states), while Maharashtra where BJP formed a coalition government (earlier this year after the Shiv Sena broke up) is one form of centralization of politics,” said Ranabir Samaddar, well-known political scientist and former professor of Maulana Azad Institute of Asian Studies.

The question of whether Kumar’s startling political moves on Tuesday will have repercussions on national politics and whether the opposition will try to build him up as a rival to Modi is of course a question which remains up in the air, to be answered in the future.