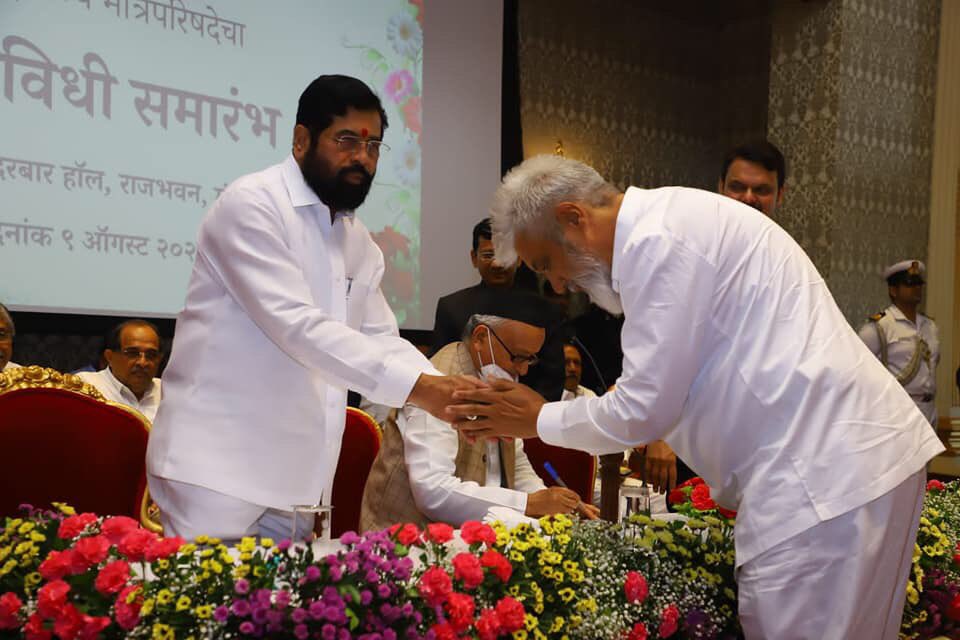 NEW DELHI: Maharashtra Chief Minister Eknath Shinde on Tuesday expanded his two-member ministry 41 days after taking oath as the CM by inducting 18 ministers, nine each from his rebel Shiv Sena group and the BJP.

The list doesn’t include a woman, a move being panned by politicians and women’s rights activists.

Firm steps towards Good Governance,
Following in the footsteps of #hinduhrudaysamrat Balasaheb Thackeray and Under the exemplary leadership of #Primeminister @narendramodi we have appointed 18 ministers in the Maharashtra Cabinet today. pic.twitter.com/Qo8UtOfvpy

“Maharashtra was the first state in the country to give reservation for women. When 50 per cent of India’s population is of women, they are not represented in the state cabinet,” NCP MP Supriya Sule said. “This shows the BJP’s mindset,” she added.

Eighteen MLAs, including state BJP president Chandrakant Patil, were sworn in as cabinet ministers at Raj Bhavan in south Mumbai on Tuesday.

The strength of Maharashtra ministry has now gone up to 20, less than half the maximum allowed strength of 43.

Governor B S Koshyari administered the oath of office to the ministers.

On June 30, Shinde was sworn in as the chief minister and Devendra Fadnavis took oath as deputy CM.

No minister of state was sworn in today. There will be another ministry expansion later, an aide of Shinde said.

While BJP has inducted Lodha, who hails from Mumbai, the Shinde group hasn’t included any legislator from the financial capital, where municipal corporation elections are slated later this year.

The new ministers include Shinde group MLA Sanjay Rathod, who was the forest minister when Uddhav Thackeray was the Chief Minister, and was forced to resign after BJP leaders blamed him for a woman’s suicide.

State BJP vice president Chitra Wagh protested Rathod’s induction into the Cabinet. “It is very unfortunate that former minister Sanjay Rathod, who caused the woman’s death, has been given the post of minister again. I will continue my fight against Rathod even though he has become a minister again,” she said.