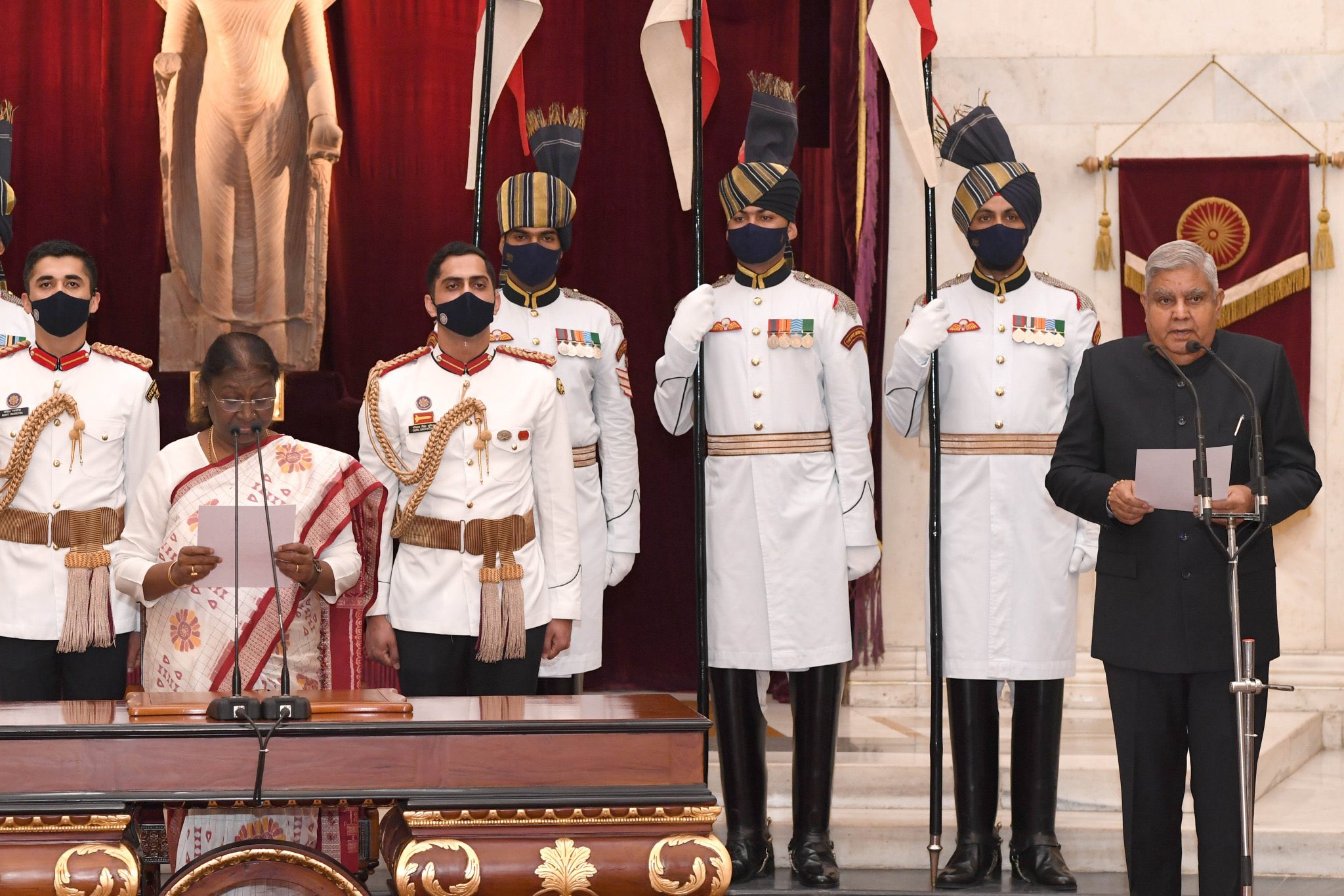 NEW DELHI: Jagdeep Dhankhar was on Thursday sworn in as the 14th Vice President of India. President Droupadi Murmu administered the oath to Dhankhar (71) during a brief ceremony at the Rashtrapati Bhavan.

Dhankhar took the oath in Hindi in the name of god.

Shri Jagdeep Dhankhar being sworn in as the 14th Vice President of India by the President, Smt. Droupadi Murmu at a swearing-in ceremony at Rashtrapati Bhavan today. pic.twitter.com/zOSdfYCkOp

“Bahut-bahut badhai (many congratulations),” Murmu said after Dhankhar signed the register of oath. Before the swearing-in, the Election Commission’s certification of election issued to Dhankhar was read out.

In the morning, Dhankhar paid tributes at Raj Ghat, the memorial of Mahatma Gandhi. “Felt blessed, inspired and motivated to be ever in service of Bharat in serene sublimity of Raj Ghat while paying respects to pujya Bapu,” he tweeted then.

Once a “reluctant politician”, Dhankhar’s reemergence in the political scene in 2019 as West Bengal governor surprised many, so has his rise to the office of the Vice President of India.

Dhankhar was declared elected as the Vice President on Saturday after he bagged 528 votes against his rival candidate Margaret Alva’s 182.

A man of many interests, his long legal career at the Rajasthan High Court and the Supreme Court and a brief stint as the junior parliamentary affairs minister at the Centre will come in handy as he presides over Rajya Sabha as its chairman.

Dhankhar, who had been associated with the Janata Dal and the Congress, joined the BJP only in 2008 after a hiatus of nearly a decade.

He has championed issues related to Other Backward Classes, including the grant of OBC status to the Jat community in Rajasthan.

While his surprise appointment as the West Bengal governor in 2019 brought him back to the political limelight, he did not shy away from the hurly-burly of politics and was caught in frequent run-ins with the state’s ruling Trinamool Congress.

The BJP described Dhankhar as a “kisan putra” while announcing his candidature for the vice presidential election, a move seen in political circles as aimed at reaching out to the politically significant Jat community which had participated in huge numbers in the year-long farmers’ protests on the borders of the national capital against agriculture reform measures unveiled in June 2020.

Dhankhar, who took to cricket in his school days and also had keen interest in spirituality and meditation, began his political journey with the Janata Dal and won the Lok Sabha elections in 1989, held under the shadow of the Bofors scandal, from Jhunjhunu in Rajasthan. He had a brief stint as the minister of state for parliamentary affairs under Prime Minister Chandra Shekhar.

In his initial journey as a politician, Dhankhar was influenced by Devi Lal and later, shifted to the Congress during the tenure of Prime Minister P V Narasimha Rao.

After hanging his boots as an MLA, Dhankhar focused on his legal career, practising as a lawyer in the Supreme Court. He also had a three-year stint as a member of the International Court of Arbitration in Paris.

BJP president J P Nadda described Dhankhar as a first-generation lawyer fully equipped in administrative capacity. Dhankhar is also known to have warm ties with leaders across party lines, a quality that would come handy as he presides over Rajya Sabha.

Prime Minister Narendra Modi had said Dhankhar had excellent knowledge of the Constitution and was well-versed with legislative affairs.

“I am sure that he will be an outstanding Chair in Rajya Sabha and guide the proceedings of the House with the aim of furthering national progress,” the prime minister said on July 16.

Now, the presiding officers of both Lok Sabha and Rajya Sabha are from Rajasthan, among the only two states currently ruled by Congress governments. Both would go to polls next year.

Dhankhar was born on May 18, 1951 in Kithana village of Jhunjhunu district, Rajasthan. He did his primary schooling in the village and later, joined the Sainik School, Chittorgarh, on a full scholarship.

After graduating from Sainik School, he joined the Maharaja’s College, Jaipur, in the B.Sc (Honours) Physics course, according to his biography on the West Bengal Raj Bhavan website.

He is married to Sudesh Dhankhar and they have a daughter.

Naidu, meanwhile, will be leaving for Hyderabad on Thursday as the 1, Thyagraj Marg residence allotted to him as a former vice president is not yet ready, officials said.

In this article:Jagdeep Dhankhar, Vice president of India