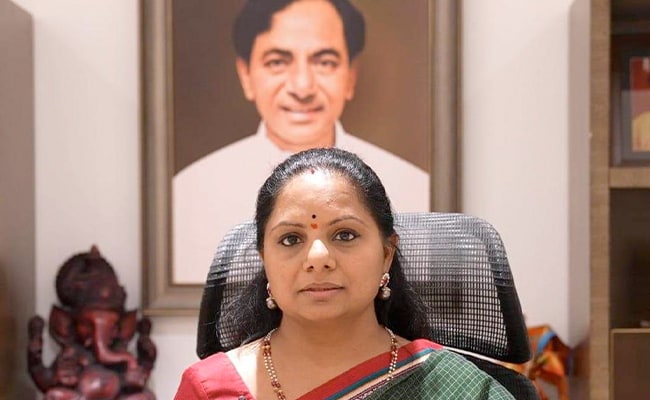 NEW DELHI: TRS MLC Kavitha Kalvakuntla on Monday slammed the BJP for dragging her and her family in the ongoing row over the now-scrapped Delhi excise policy and would file a defamation suit against two saffron party leaders, one of whom had claimed she was a “middleman” between the liquor mafia and the AAP government.

Kavitha, daughter of Telangana Chief Minister K Chandrasekhar Rao, said the allegations made by the BJP leaders are “baseless” and sources in the ruling TRS said she would file a defamation case against BJP MP Parvesh Verma and party leader in Delhi Manjinder Singh Sirsa.

“Today, I want to make it very clear that the allegations that are made against me by the BJP and their party members are completely baseless,” she told reporters here.

Kavitha said the BJP-led government at the Centre can do whatever investigation is required as the probe agencies are under its control and that she would fully cooperate.

Observing her father KCR has been critical of the policies of the Central BJP-led government, she claimed the saffron party is trying to malign her family’s reputation, rattled by the criticism of the Telangana CM.

She said her “family consists of fighters who would never go back on their fight”.

“Today, if you just want to put us down, by throwing some baseless allegations, it is just going to remain baseless. Nothing is going to come out of it,” Kavitha said.

The TRS MLC said the BJP in the Centre is using everything possible to curtail the voice of the opposition.

BJP MP Parvesh Verma on Sunday dragged Chandrasekhar Rao into the row over the now-scrapped Delhi excise policy, claiming his family members attended meetings on its formulation at a five-star hotel in Delhi.

Verma said Telangana has a “similar” excise policy and it has been implemented in West Bengal too.

“Telangana CM K Chandrashekar Rao’s family members attended meetings on the formulation of the Delhi excise policy at Oberoi Hotel. KCR’s family members got the same policy implemented in Punjab. They prepared a plan for Delhi, along with Delhi Chief Minister Arvind Kejriwal and his deputy Manish Sisodia,” Verma alleged.

The BJP leader also alleged, “Kavitha acted as a middleman between the liquor mafia and AAP government in Delhi.” The Central Bureau of Investigation (CBI) on August 19 raided 31 locations, including Sisodia’s residence in connection with the irregularities in the Delhi government’s Excise Policy 2021-22.

Sisodia, Delhi’s deputy CM is among the 13 people named as accused in an FIR registered by the CBI in connection with alleged irregularities in the implementation of the excise policy.: KCR’s daughter to file defamation suit against BJP leaders