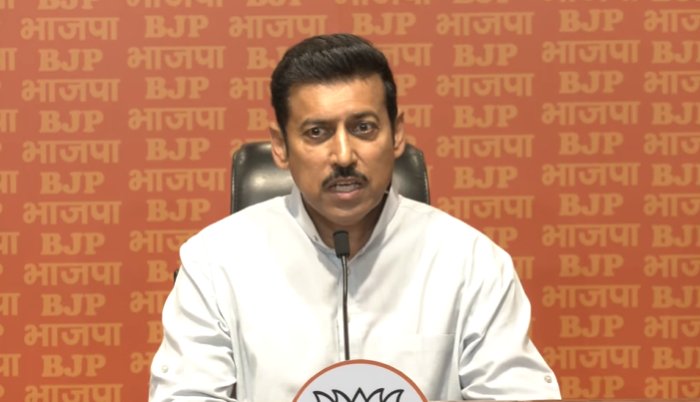 NEW DELHI: The BJP on Sunday dubbed the Congress rally against price rise as “Rahul Gandhi relaunch 4.0” because, it said, no leader of the opposition party wants to head it.

The Congress on Sunday held a ‘Mehngai par halla bol’ rally at the Ramlila Maidan here, which was addressed by former Congress president Rahul Gandhi and a host of other party leaders.

“This rally is meant to save the family and not to protest against price rise. And to relaunch Rahul Gandhi, who has been launched several times in politics. This rally is ‘Rahul Gandhi relaunch 4.0’, as no one wants to lead the Congress,” Rathore said.

The BJP spokesperson said the Congress is oblivious of the ground realities, and “it has no vision, no policy, and no leadership.”

Rathore, an MP from Rajasthan, also hit out at the Congress government there and its Chief Minister, Ashok Gehlot, alleging that even though there has been “jump in crimes against women and seers” Gehlot is prioritising Gandhi family over law and order in the state.”

“The Rajasthan Chief Minister rushes to Delhi, whenever law enforcement agencies … calls the Gandhi family and puts the state’s interests on back burner,” Rathore added.

In this article:BJP, Congress, Rahul Gandhi