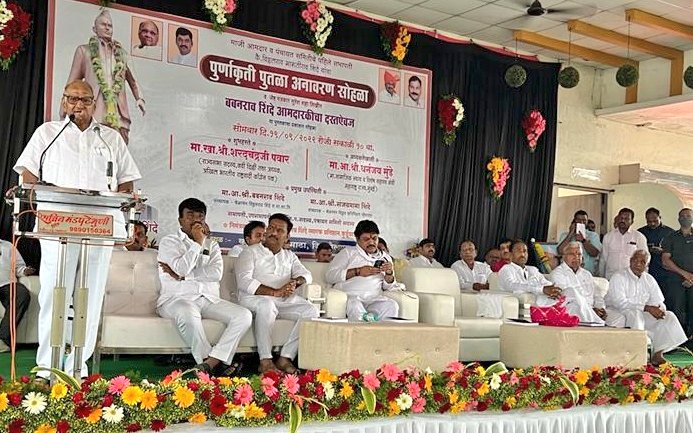 PUNE: NCP chief Sharad Pawar on Monday acknowledged the “usefulness” of the Bharat Jodo Yatra led by Rahul Gandhi for the Congress leader and his party.

He also hinted that he was not against the inclusion of Congress if the Opposition unity takes shape for the 2024 elections.

Speaking to reporters in Solapur district of Maharashtra, Pawar said big padyatras or foot marches like ‘Bharat Jodo Yatra’ have a political impact and people welcome such programs with sincere intent.

Replying to a question on whether the Bharat Jodo Yatra will have an impact on politics in the coming days, Pawar said when such big yatras are taken out, they turn out to be useful. “When Chandrashekhar (former Prime Minister) had taken out a similar padayatra it had received a tremendous response. I had also taken out a march from Jalgaon to Nagpur (in 1980) for farmers,” the former chief minister recalled.

He said about 5,000 people had joined his yatra when it started from Jalgaon in north Maharashtra and the number swelled to 50,000 in Buldhana and more than one lakh when it reached Akola and Amaravati in east Maharashtra.

“The march proved useful to change politics of the entire state,” Pawar said.

Speaking on the Bharat Jodo Yatra, launched on September 7 from Kanyakumari for Kashmir, Pawar said, “One cannot deny the usefulness of this padayatra, undertaken by (Congress) from the perspective of the party and the person (Rahul Gandhi)”.

He said people welcome such programs if they are organised with a lot of effort. Asked whether there will be a joint face of the Opposition against Prime Minister Narendra Modi in the 2024 elections and whether opposition parties will contest together, Pawar said nothing can be said as of now regarding any future arrangement.

“Everyone wishes that something should be done. But we have not come to any conclusion. Discussions are happening. Recently, Nitish Kumar (JD-U chief) came to me. The same topic was discussed. The other day (TMC supremo) Mamata Banerjee met me and she also put forth the same stand. Similar thoughts were echoed by leaders from Kerala and Tamil Nadu. These are opinions but that have not yet come to any conclusion,” said Pawar.

“But my opinion is that one should not take the stand of opposing the other’s inclusion,” he added.

Queried about the allegations by Bharatiya Janata Party (BJP) that he and Uddhav Thackeray have “neglected” Shiv Sena MP Sanjay Raut, currently in jail in a money laundering case, Pawar said Raut’s arrest by the ED shows the “misuse of power”.

He said Thackeray-led Shiv Sena’s stand to hold the annual Dussehra rally at Shivaji Park in Mumbai is justified.

Asked about the Thackeray faction still awaiting permission to hold the rally, Pawar said he has been seeing for the last 30-40 years that Shiv Sena, earlier led by Bal Thackeray, has been holding the Dussehra rally at Shivaji Park, which is like a tradition.

“To continue this tradition, if they are seeking permission to hold the rally at Shivaji Park, I think there is nothing wrong in it,” he said.

Pawar also said the Shiv Sena faction led by Maharashtra Chief Minister Eknath Shinde also has the right to hold a Dussehra rally and has been granted permission to organise the event in the MMRDA ground at the Bandra Kurla Complex in Mumbai.

“As their issue is resolved, why oppose others? I am saying that they (the Shinde faction) cannot oppose granting of permission (to the Uddhav faction to hold the rally at Shivaji Park,” he said.