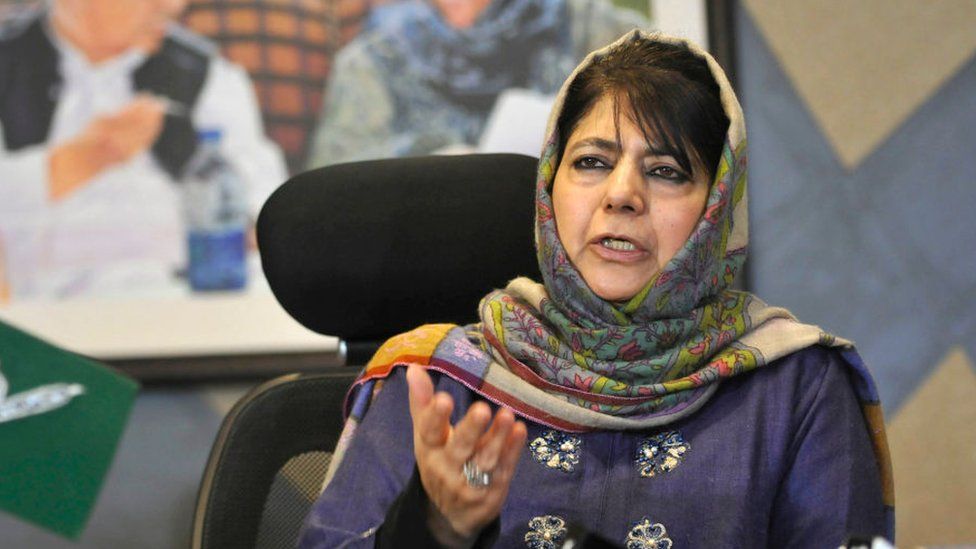 The former chief minister had on Monday posted a video on Twitter in which school staff were seen asking students to recite the hymn, considered Mahatma Gandhi’s favourite bhajan, and termed it the government’s real “Hindutva agenda”.

Reacting to her remarks, Raina said she should avoid playing such politics by “poisoning the young minds”.

Jailing religious scholars, shutting down Jama Masjid & directing school kids here to sing Hindu hymns exposes the real hindutva agenda of GOI in Kashmir. Refusing these rabid dictates invites PSA & UAPA. It is the cost that we are paying for this so called “Badalta J&K”. pic.twitter.com/NssOcDP4t6

“Mahatma Gandhi united the whole nation by this bhajan during the freedom struggle. The school children also sing ‘lab pe aati hai dua banke tamanna meri… (my heart’s desire comes to my lips as a prayer) in their morning assembly and there was no objection from anyone,” Raina said.

Talking to reporters on the sidelines of a free medical camp organised by the party here under ‘Sewa Pakhwada’, he said some people deliberately create such controversies for their vested political interests.

“Mehbooba should avoid playing such type of politics. She has lost her ground in Kashmir and people of the Valley rejected her. She is coming out with such a conspiracy (to regain her place),” he said.

“This country belongs to all of us, the people of all faiths — Hindus, Muslims, Sikhs, Christians and others. Mehbooba should read more often Allama Iqbal’s ‘mazhab nahin sikhata aapas mein bair rakhna’ (religion does not teach us to fight)…,” the BJP leader said.

On the reopening of cinema halls in Kashmir after over three decades, Raina quipped, “This is the beginning of a new era. Our youngsters in the Valley have only heard the sounds of bombs and bullets and are deprived of all entertainment available to their counterparts in other parts of the country.”

“The people will have an enjoyable experience with the opening of multiplexes,” he added.

He said the BJP is “working overtime” to resolve the issues in Jammu and Kashmir and the problems faced by daily wage workers.

In this article:ammu and Kashmir, BJP, Mehbooba Mufti, Political interests