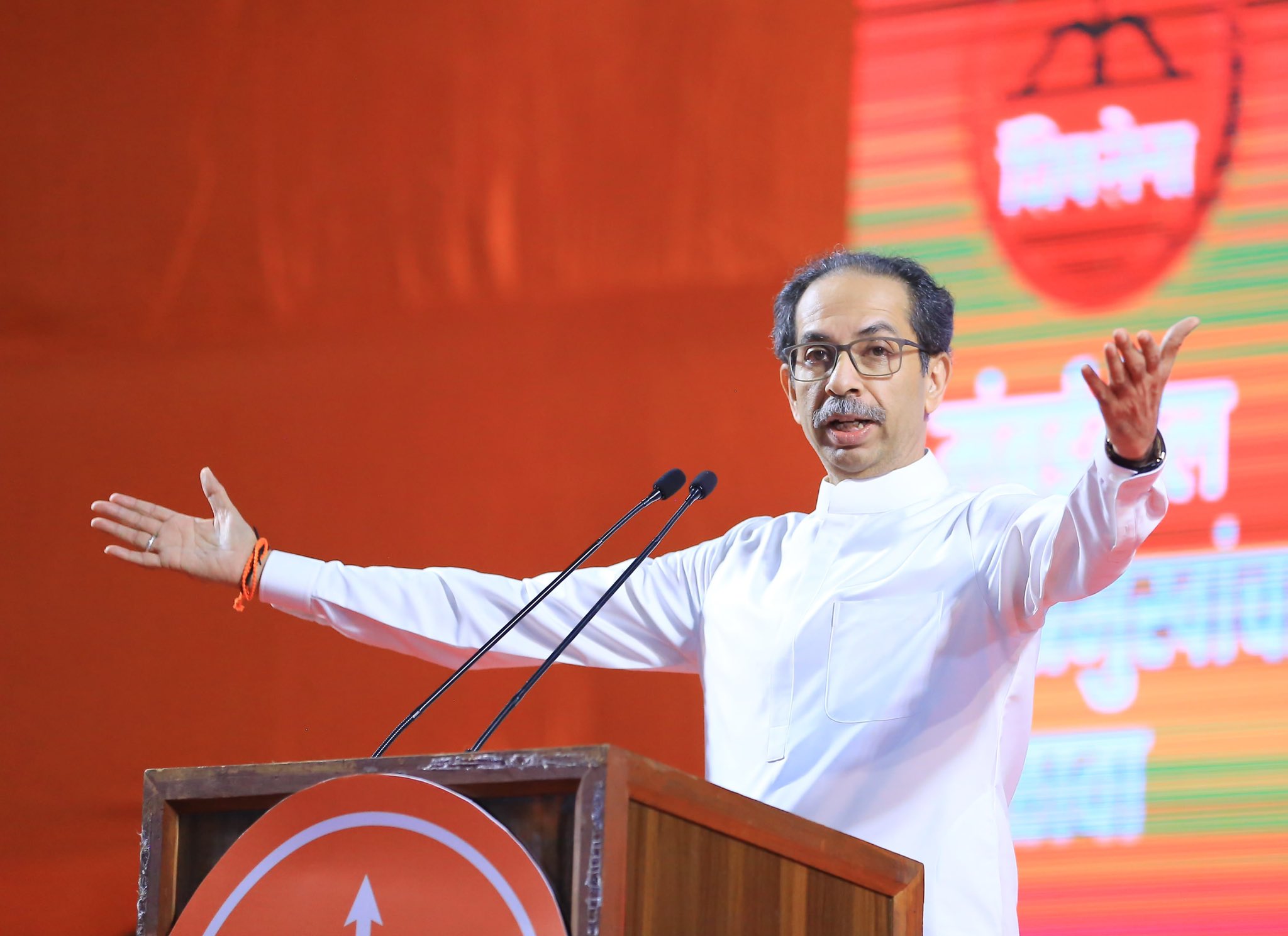 MUMBAI: Asserting that the bond between the Shiv Sena and Mumbai was unbreakable, party president Uddhav Thackeray on Wednesday dared the Bharatiya Janta Party (BJP) to hold Brihanmumbai Municipal Corporation (BMC) elections and Maharashtra Assembly polls in a month and defeat his outfit.

Accusing the BJP, which is part of the state government, of speaking “blatant lies on the Rs 1.54 lakh crore Vedanta-Foxconn semiconductor plan coming up in Gujarat, Thackeray attacked Chief Minister Eknath Shinde for sitting quiet over Maharashtra losing out on the project and prostrating before Delhi.

The former chief minister, addressing party workers at suburban Goregaon, said the Centre is giving huge incentives to the project after it was moved to the adjoining BJP-ruled state.

A blame-game erupted in Maharashtra following the announcement last week that the joint venture semiconductor project of Indian conglomerate Vedanta and Taiwanese electronics giant Foxconn, proposed to be set up near Pune city earlier, will come up in Gujarat now.

At the rally attended by his wife Rashmi and second son Tejas, Thackeray asserted that his party’s annual Dussehra rally will take place at its traditional venue, Mumbai’s Shivaji Park.

The party is yet to get permission from the BMC top hold its annual rally at the iconic park.

“Union Home Minister Amit Shah has asked his party (BJP) to show the Shiv Sena its place in the Mumbai civic polls. I dare you to try it. Shiv Sena’s relationship with the city was unbreakable and the party was deeply connected with the day-to-day life of ordinary Mumbaikars, rushing to their help whenever required, he said.

The Sena leader be it natural calamities or terror attacks, it is the Shiv Sainik who responds to them first and comes to the aid of people, and not the BJP.

“I challenge Amit Shah that if you have guts, hold the BMC polls in a month and also state Assembly elections,” he said.

Earlier this month, Shah, during a visit to Mumbai, had asked BJP leaders and workers to inflict a “deeper wound” on the Uddhav Thackeray-led Shiv Sena on its home turf.

Shah, a former BJP president, had slammed Thackeray, saying he compromised on everything to become the CM with the support of the Sharad Pawar-led Nationalist Congress Party (NCP) and the Congress despite seeking votes in the 2019 polls in the name of Prime Minister Narendra Modi and BJP leader Devendra Fadnavis.

The Shiv Sena has been ruling the Mumbai civic body for almost 30 years. Currently, the BMC is run by an administrator as the five-year term of the civic body had ended and elections are awaited.

If you hit a person at any place, it does hurt. When you hit a person on his home ground, the pain is deeper. Now it is the time to inflict a deeper wound to Sena, Shah had told a meeting of BJP leaders.

Speaking at the rally, Thackeray elaborated on the deep bond between his party and Mumbai residents.

“Why is the bond between Mumbai and the Shiv Sena strong? Because its shakas (party branches) are open all the time. So be it blood donations, admission in hospitals and schools or employment, the party is there to help people,” he said.

Have you (the BJP) even understood Mumbai before thinking of winning it? Before winning the civic body, win the hearts of Mumbaikars which the Shiv Sena has, said the former CM.

Fight this (BMC) election as your (party workers) first election. Assume that we do not have anythingthe civic body, corporators. Consider that the MLAs, MPs who left us lost the polls in the last elections and we have to again wage a new fight, the Sena leader said.

Thackeray asked the BJP, his former ally, to tell people what was its contribution in building the metropolis apart from considering it just a piece of real estate and asked what is the relation between Kamlabai (BJP) and Mumbai?

Vultures are hovering over Mumbai and they want to swallow Mumbai. You remember Mumbai when elections are round the corner. Where are these vultures when Mumbai is in trouble? Mumbai could be just a saleable property for you, but for me it is my motherland. This is our mother and those who come to attack us, we will disembowel them in this political wrestling, he warned.

In a stinging attack on rebel Shiv Sena MLAs, whose revolt in June brought down the three-party Maha Vikas Aghadi (MVA) government, he dubbed them as children who swallow their mother.

Hitting out at the BJP for targeting him on dynastic politics, the former Chief Minister said, “I am proud of my family who took part in the Samyukta (united) Maharashtra movement.”

Thackeray also listed the work done by the erstwhile MVA government headed by him while handling the COVID-19 pandemic.

“If saving lives is corruption, we have done it,” he said, referring to BJP’s allegations of corruption during the pandemic when the Shiv Sena-led ruling coalition was at the helm in the state.

The former CM said during the COVID-19 pandemic, he saved lives without discriminating people on the lines of religion or language.

Taking a dig at Modi, the Sena leader said cheetahs were brought to the country after 70 years and publicity was how they “roar”.

I proudly say that we brought penguins (in Mumbai zoo when Sena was ruling BMC), but I have never clicked pictures of penguins despite being a photographer,” he said.

A pet project of Shiv Sena leader Aaditya Thackeray, introducing penguins in the Mumbai zoo had faced criticism from the BJP and even the Congress for high cost of maintenance of the flightless birds.

State BJP leaders call the Shiv Sena as Penguin Sena in response to their Sena counterparts dubbing the BJP as Kamlabai (a dig on the party’s lotus symbol).

The Sena president said although schools in the Aam Aadmi Party-ruled Delhi are good, his political outfit, which controlled the BMC for nearly 25 years, improved the quality of education in civic-run schools and introduced virtual classes some 15 years back.