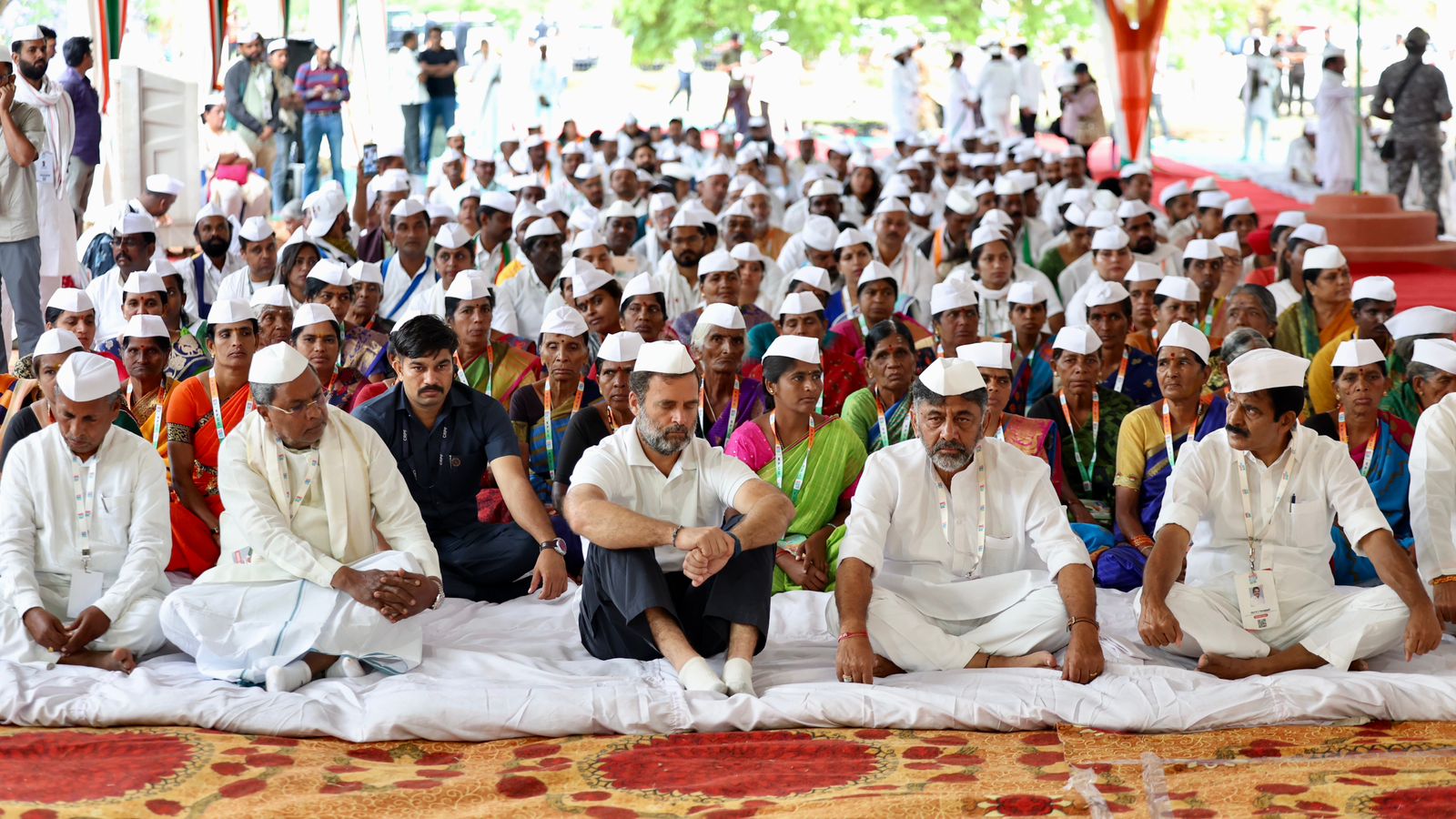 BADANAVALU: Congress leader Rahul Gandhi on Sunday paid tributes to Mahatma Gandhi on his birth anniversary and said while it is convenient for those in power to appropriate the legacy of the Father of the Nation, it is difficult to walk in his footsteps.

Rahul Gandhi, who visited a Khadi Gramodyog Kendra here that Mahatma Gandhi had visited in 1927 and 1932, said the ideology that killed the freedom fighter has delivered inequality and divisiveness in the last eight years.

Just as Gandhiji fought the British Raj, we are today embarked on a battle with the very ideology that killed Gandhi.

He also participated in a prayer meeting and interacted with women weavers at the Khadi Gramodyog Kendra. Later, he visited Badanavalu village near Mysuru and interacted with the villagers besides doing ‘Shramdaan’ (voluntary work) by laying a pavement.

In a statement, Rahul Gandhi said, ”We remember and pay our respects to that great son of India. Our remembering is made more poignant by the fact that we are on the 25th day of the Bharat Jodo Yatra, a padyatra in which we are walking his path of ahimsa, unity, equality and justice.” ”Just as Gandhiji fought the British Raj, we … (have) embarked on a battle with the very ideology that killed Gandhi. This ideology has delivered inequality, divisiveness and the erosion of our hard-won freedoms in the past eight years.

”Against this politics of himsa (violence) and ‘asatya’ (lies), the Bharat Jodo Yatra will spread the message of Ahimsa and ‘swaraj’ from Kanyakumari to Kashmir,” he said, adding that ‘swaraj’ has different meanings.

”It is the freedom of our states to exercise their constitutional freedoms and of our villages to practice Panchayati Raj,” he said.

It is also the conquest of the self, whether it is the ‘Bharat yatris’ who are travelling 3,600 km on foot or the lakhs of citizens who are walking with us for shorter periods, Rahul Gandhi said.

He said the Congress’ yatra is the quiet and determined voice of the Indian people against the politics of fear, hatred and division.

”It might be convenient for those in power to appropriate Gandhiji’s legacy, but it is much more difficult to walk in his footsteps,” he said.

The Wayanad MP said a huge number of men, women and children have taken part in the ‘Bharat Jodo Yatra’ so far and many of them believe that their constitutional rights and the values that Gandhi gave his life for are under threat today.

”As we continue on our journey from Mysuru to Kashmir, I request my fellow citizens across India to walk with us in the spirit of Ahimsa and ‘sadbhavna’ (goodwill),” he said.

He will cover a distance of 511 km in Karnataka over the next 21 days.

The ‘Bharat Jodo Yatra’, which started from Kanyakumari in Tamil Nadu on September 7, will cover a distance of 3,570 km in 150 days and conclude in Jammu and Kashmir.