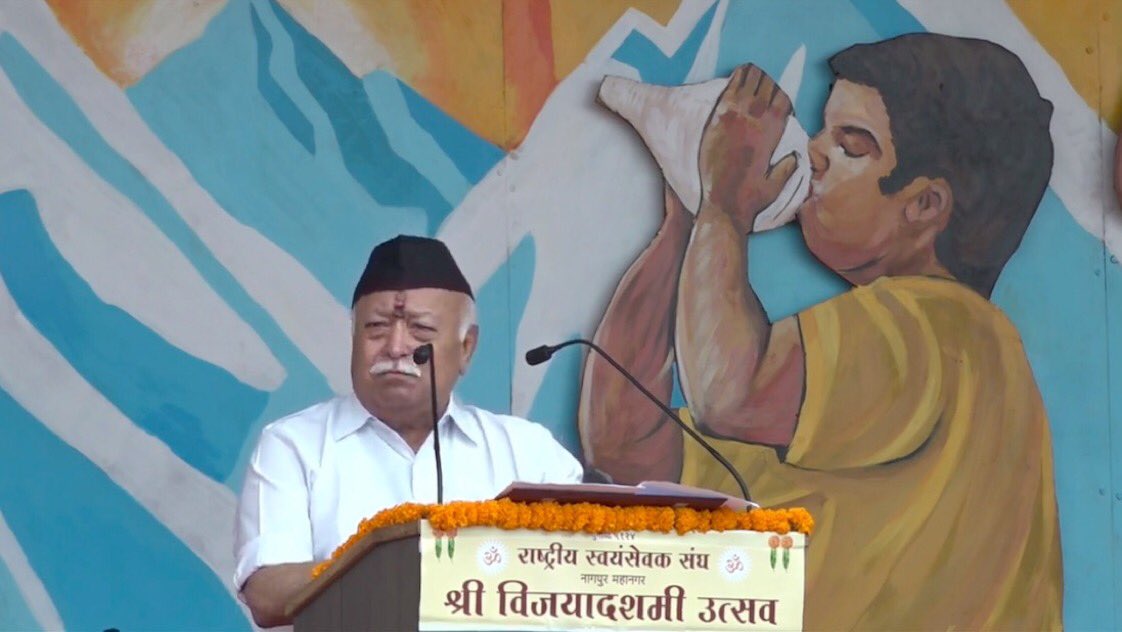 NAGPUR: Rashtriya Swayamsevak Sangh (RSS) chief Dr Mohan Bhagwat on Wednesday said scare-mongering was being done by some that there was a danger to minorities, but asserted that this is neither the nature of the Sangh nor of Hindus.

“The Sangh resolves to stand on the side of brotherhood, amity and peace, Bhagwat said at the RSS Dussehra rally in Nagpur.

Raising concerns over inequality, he said “unless temples, water sources and cremation grounds are open to all Hindus, till such time the talk of equality will be a mere pipe dream”.

There should be no recurrence of Udaipur and Amravati incidents (where a tailor and a pharmacist were killed after they support suspended BJP spokesperson Nupur Sharma), Bhagwat said, adding that a particular community as a whole should not be taken as the root cause for it.

The RSS chief the concept of “Hindu Rashtra” is being taken seriously.

“Now, when the Sangh is receiving the affection and confidence of people and also has become strong, the concept of Hindu Rashtra is being taken seriously,” he said.

“Many people agree with the concept, but are opposed to the word ‘Hindu’ and they prefer to use other words. We don’t have any issue with that. For the clarity of concept – we will keep emphasising the word Hindu for ourselves,” he said.

He also laid emphasis on women’s empowerment and said a society cannot progress without women.

Acclaimed mountaineer Santosh Yadav was the chief guest at the function. She is the first woman in the world to climb the Mount Everest twice.

Bhagwat said “horrific and grisly incidents” occurred in Udaipur and some other places recently which stunned the society made most of the people sad and angry.

“The Hindu society in general assertively expressed their protests and strong reactions after such incidents even if the accused be Hindu persons,” he said.

“Whatever be the extent of provocation, protests always have to be within the boundaries of laws and Constitution. “Our society should come together, not fall apart or quarrel,” said Bhagwat.

He said everyone should speak mindfully and sensibly with a sense of mutual reciprocity in word, deed and actions.

“We look different and distinctive, so we are different, we want separation, we cannot be with this country, its way of life and ideas or its identity; due to this falsehood brothers were separated, territory was lost, places of worship were destroyed – no one was happy with the poisonous experience of partition,” he said.

“We are of Bharat, came from Bhartiya ancestors and its eternal culture, we are one as a society and in our nationality, this is the only protective shield, the mantra for us all,” he said.

He said “scare-mongering is done among the so-called minorities that there is a danger to them because of us or organised Hindus”.

This has not happened in the past, nor will it happen in future. This is neither the nature of the Sangh nor of the Hindus, history bears this out, he asserted.

“Self defence and defence of our own becomes a duty for everyone against those who spread hatred, commit injustice, atrocity, engage in acts of hooliganism and enmity towards society,” he said.

Neither threatens nor gets threatened, this kind of a Hindu society is a need of the present times. This is not anti-anybody. The Sangh has a steely resolve to stand on the side of brotherhood, amity and peace,” said Bhagwat.

He said with some such worries from among the so-called minorities, some people have been meeting them. They have had meetings and discussions with the Sangh office-bearers and this will continue.

He said obstacles are created by forces who are inimical to India’s unity and progress. Broadcasting wrong and fake narratives for spreading misperceptions, engaging and encouraging criminal acts, fomenting terror, conflict and social unrest are their tactics.

” We are experiencing these. These forces pit different sections of society against each other on the basis of sectional self-interest and hatred, and increase chasms and enmities, this has been their conduct in independent Bharat.

Without getting trapped in their machinations, irrespective of their language, religion, region, policy, they have to be dealt with fearlessly, relentlessly and be either protested or repelled. We should assist the government’s and administration’s efforts to control and bring such forces to its heels. Only our society’s strong and pro-active cooperation can ensure our comprehensive security and unity,” he said.

Bhagwat said “the devotion to Bharat, the shining ideals of our ancestors and the great Sanskriti of our country, these are the three pillars which light up and pave our path on which we have to travel together with love and affection. This is our selfhood and Rashtra Dharma”.

The Sangh works to develop the entire society as an organised force. This work is Hindu Sangathan work because the above mentioned thought is called as the thought of Hindu nation and it is so, he said.

Therefore, without opposing anybody, the Sangh organises all who subscribe to this thought – that is “organising the Hindu society for protecting the Hindu dharma, sanskriti, samaj, and an all-round development of the Hindu Rashtra,” opined Bhagwat.

Raising concerns over inequality, he said temples, water sources and cremation grounds should be common for all.

“We should not fight over petty things. Talks like someone can ride a horse and the other person cannot, should have no place in society and we have to work towards it, Bhagwat said.

The Constitution engineered political and economic equality but without social equity, real and stable transformation is not possible, such a cautionary advice was given by Dr Babasaheb Ambedkar, he said.

Later, ostensibly, some rules were made to achieve this objective. “But the root cause of inequality is in our minds, social conditioning and habitual conduct,” he said.

“Personal and inter-family/community friendships, easy and informal exchanges, co-mingling take place and at the social level unless temples, water sources and cremation grounds are open to all Hindus, till such time the talk of equality will be a mere pipe dream,” Bhagwat said.

He also laid emphasis on ‘Matri Shakti’ and pitched for equal participation of women in the growth and development of India.

We must empower our women. Society cannot progress without women. Our prestige and credibility increased in the world. In the past, we put some restrictions on women although culturally we call them our mother out of respect. However, after the invasions that went on for decades, we legitimised those restrictions, he said.

There have been many instances in the past when the RSS had invited noted women personalities on its stage as the chief guest of Dussehra rally, including Anusuyabai Kale, Rajkumari Amrut Kaur and Kumudtai Rangnekar, he said.

Bhagwat said there is a need to give equal rights to women and freedom for taking decisions in the public and family works.

Women can do all work that can be done by men, but men cannot do all the work that women can do, this is their strength, he added.