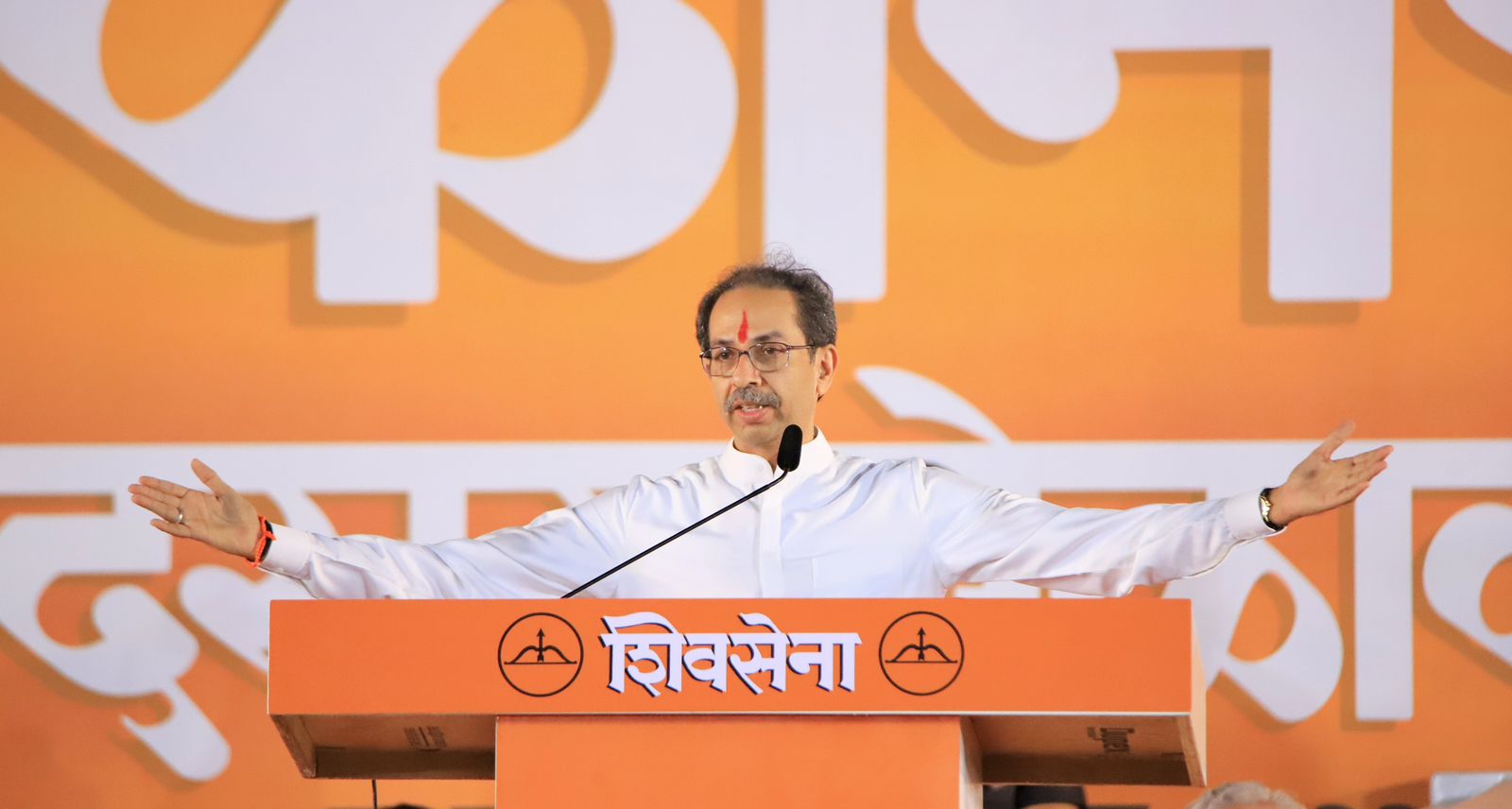 MUMBAI: In a scathing attack on Maharashtra Chief Minister Eknath Shinde and other rebel party leaders, Shiv Sena president Uddhav Thackeray on Wednesday said their reputation as “traitors” will never go away.

Thackeray, who stepped down as chief minister in June following Shinde’s rebellion, addressed the party’s annual Dussehra rally at the iconic Shivaji Park even as the Shinde faction organized its own rally elsewhere in the city.

“The stamp of traitor (on the Shinde faction) will never go away. As time changes, the face of Ravan also changes. Today, it is the traitors (who are Ravan),” he said at the well-attended gathering.

When he was unwell and underwent a surgery while being the chief minister, he had delegated responsibility to Shinde, then a senior minister, Thackeray said.

“But he conspired against me thinking I will never stand up on my feet again,” Thackeray alleged.

Today’s Ravan was not known for multiple heads but for the number of ”khoke” (boxes), he said, alluding to the alleged use of monetary inducement or boxes of cash to bring down the Maha Vikas Aghadi (MVA) government led by him.

“If you feel I should not remain the Sena president, I will quit. There is a limit to the lust for power. After the act of treachery, he (Shinde) now wants the party, its symbol and also wants to be called party president,” Thackeray said.

Shinde was now trying to appropriate Sena founder Bal Thackeray’s legacy because he could not get votes in his “own father’s name,” he said.

He formed a post-poll alliance with Congress and Nationalist Congress Party in 2019 to teach the BJP a lesson for going back on its past assurance, Thackeray said.

“I swear on my parents that it had been decided that BJP and Shiv Sena will share the chief minister’s post for two and a half years each,” he said.

Shinde was among the first to be sworn in as a minister along with Congress and NCP leaders, and “he had no problem then,” Thackeray said, referring to Shinde’s claim that he rebelled because he and his supporters did not approve of the new alliance.

He did not want lessons from BJP on Hindutva, Thackeray said.

“BJP leaders visited (then Pakistan prime minister) Nawaz Sharif on his birthday without invitation and bowed before (Mohammad Ali) Jinnah’s grave,” he said.

Thackeray also accused the BJP, his former ally, of raising the Hindutva issue to divert attention from poverty, unemployment and inflation.

“RSS general secretary Dattatreya Hosabale has shown BJP the mirror,” he said, referring to Hosabale’s recent remark about the challenges of unemployment and rising income inequality.

With the rupee plummeting against dollar, he invoked late BJP leader Sushma Swaraj’s statement that when the value of the rupee decreases, the country’s standing also goes down.

Fighting to retain control of the party founded by his late father, Uddhav sought support and strength from the Sena cadres in front of him.

“Today I have nothing. But with your support Shiv Sena will rise again. I will make a Shiv Sena worker chief minister again. We have to defeat the traitors in every election,” he said, ahead of the byelection to Andheri East Assembly constituency and Mumbai civic polls.

He also targeted BJP leader Amit Shah, asking if Shah was the country’s home minister or the BJP’s “internal minister” who only topples state governments.

Referring to Shah’s exhortation to BJP workers to show the Sena `zameen’ (to rout it), Thackeray said, “Even we want to see the zameen (land) of Pakistan-occupied-Kashmir becoming part of our country.”

The Shinde government was about to complete 100 days in office but most of this time was spent in Delhi, he said, in a dig at Shinde’s visits to the national capital. For the Shiv Sena, Hindutva meant nationalism, said Thackeray.

All nationalist Indians should be wary of the BJP’s aim to finish off all other political parties, he added.

“RSS chief Mohan Bhagwat recently visited a mosque. Has he (then) given up Hindutva?” the Sena chief said, in response to the BJP’s barbs that he discarded Hindutva by joining hands with the NCP and Congress.

Thackeray referred to Bhagwat’s speech on gender equality and highlighted the Ankita Bhandari murder case in Uttarakhand and the release and alleged felicitation of convicts in the Bilkis Bano case in Gujarat. Was this women empowerment, Thackeray asked.

“When we were with the BJP, the government never fulfilled Balasaheb Thackeray’s vision of naming Aurangabad and Osmanabad as Sambhaji Nagar and Dharashiv. As chief minister I took the decision to rename them with full support of MVA allies,” he said.

Earlier, when Thackeray arrived on stage with the word `Eknishth” (loyal) in the background, he knelt down before the gathering.

The 61-year-old leader needed the help of his aides to kneel.

“I don’t have the doctors’ permission to bow yet. But I can’t proceed before bowing to you,” he said at the start of his 30-minute speech.