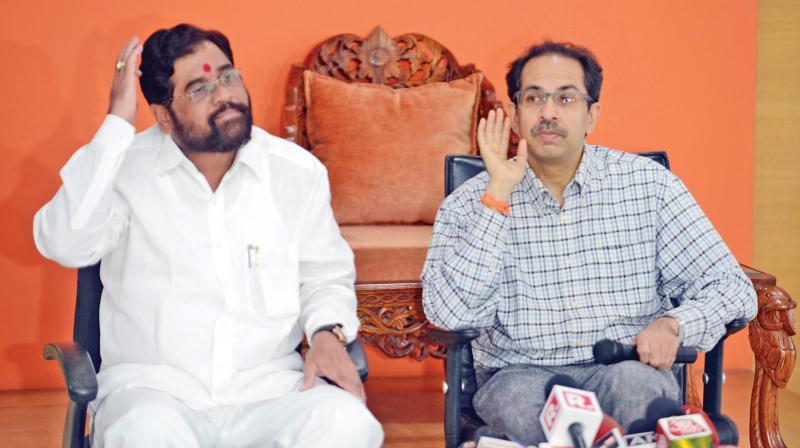 MUMBAI: The Uddhav Thackeray-led Shiv Sena on Friday alleged that Maharashtra Chief Minister Eknath Shinde’s Dussehra rally was a Bharatiya Janata Party (BJP)-backed event, and mocked him saying that he only “read out Modi-Shah Chalisa” during his speech.

It also dubbed the Shinde-led rebel faction as a “duplicate Shiv Sena”.

In an editorial in Shiv Sena mouthpiece ‘Saamana’, the party claimed that the Shinde camp must have spent Rs 50 crore to Rs 100 crore on the Dussehra rally held at the Bandra Kurla Complex (BKC), as nearly 2,000 buses were booked to ferry supporters and over two lakh people who attended the event were given food.

“The rally at the BKC was one of the BJP-backed events. The amount spent must have been the same used for buying a couple of MLAs. The event was like a fashion show and a beauty pageant,” it said.

Ever since Shinde and other Sena legislators rebelled against the party leadership, the Uddhav Thackeray faction has been targeting them saying that each of the rebel MLA took 50 ‘khoke’ or boxes, meaning Rs 50 crore to switch loyalty.

“The rally was organised in the name of Shiv Sena, but it was more of a BJP event, because in his speech, the chief leader (Shinde) of the duplicate Shiv Sena, just read out the Modi-Shah Chalisa (heaping praise on Prime minister Narendra Modi and Home Minister Amit Shah),” it said in reference to Hanuman Chalisa.

The two factions of the Shiv Sena held mega rallies on Dussehra evening. While Thackeray addressed his rally at Shivaji Park in Dadar area, Shinde addressed a gathering at the BKC.

Thirty-nine Shiv Sena MLAs, 12 MPs have aligned with Shinde, along with 10 independents. On Wednesday, Uddhav Thackeray’s elder brother Jaidev, his estranged wife Smita, and his nephew Nihar Thackeray were on the stage. Nihar is the son of late Bindumadhav Thackeray, the son of Shiv Sena founder Bal Thackeray.

“It is the BJP that wrote the screenplay. The gist of the main speech, dialogues, characters were written by it (the BJP),” the party said.

The Shiv Sena said the Shinde faction was behaving as if it had merged with the BJP and that the supporters there were only short of chanting ‘Modi-Shah’.