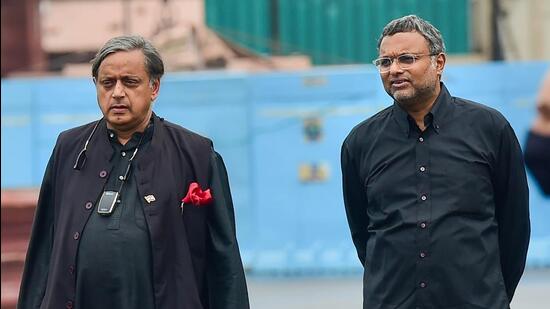 NEW DELHI: Congress presidential polls candidate Shashi Tharoor on Saturday dismissed talk of him withdrawing from the election, asserting that he never backs down from a challenge and “it is a fight to the finish”.

Tharoor, who has been aggressively campaigning in the polls, also asserted that it was a “friendly contest” within the party that was taking place and he is here to stay the course.

Tharoor is set to take on Mallikarjun Kharge in the polls.

“There are rumours going around attributed to sources in Delhi that I am withdrawing (from the polls) today. Let me assure you, I don’t withdraw from a challenge, never have all my life, never will,” the MP from Thiruvnathapuram said in a video message on Twitter.

“This is a struggle, it is a friendly contest within the party, but it is a fight to the finish and I am here to stay the course. Please come and vote on October 17. For me, ‘Think tomorrow, think Tharoor’,” Tharoor said.

His remarks come on the last date for the withdrawal of nominations which is October 8.

According to a notification issued by the Congress, the process for filing nominations for the election was from September 24 to 30.

The polling will be held on October 17. The counting of votes will be taken up on October 19 and the results will be declared the same day.

More than 9,000 Pradesh Congress Committee (PCC) delegates will vote in the polls.

Voicing strong support for Shashi Tharoor in the Congress presidential poll, party MP Karti Chidambaram on Saturday said the former diplomat’s pragmatic modernism coupled with his appeal beyond the party is crucial to fight against the BJP’s “divisive politics”.

Chidambaram also asserted that business as usual will not help the Congress and there is an urgent need for reformist thinking in the party.

“I support Shashi Tharoor for Congress President. His pragmatic modernism coupled with his appeal beyond the party, is crucial to fight BJP’s divisive politics,” the MP from Tamil Nadu’s Sivaganga said.

“Status quo and business as usual won’t help our party. There’s an urgent need for reformist thinking in our party,” said Chidambaram, who was among those who signed Tharoor’s nomination forms for the Congress presidential polls as proposers.

Responding to a social media user who claimed that Tharoor is everything that the ruling Bharatiya Janata Party (BJP) propagates as “English-enabled privileged elitism”, Chidambaram asked since when was proficiency in a language considered to be a disadvantage and a liability.

“Shashi Tharoor appeals to an audience well beyond the party faithful. Congress needs that now. His success is due to his own academic achievements, which aspirational India admires,” he said.

Tharoor is set to take on veteran Congress leader from Karnataka Mallikarjun Kharge for the party’s top post. The Congress is set to vote for its new president on October 17. The results will be announced on October 19.

It will be the first time in more than 24 years that a non-Gandhi will occupy the top party post.