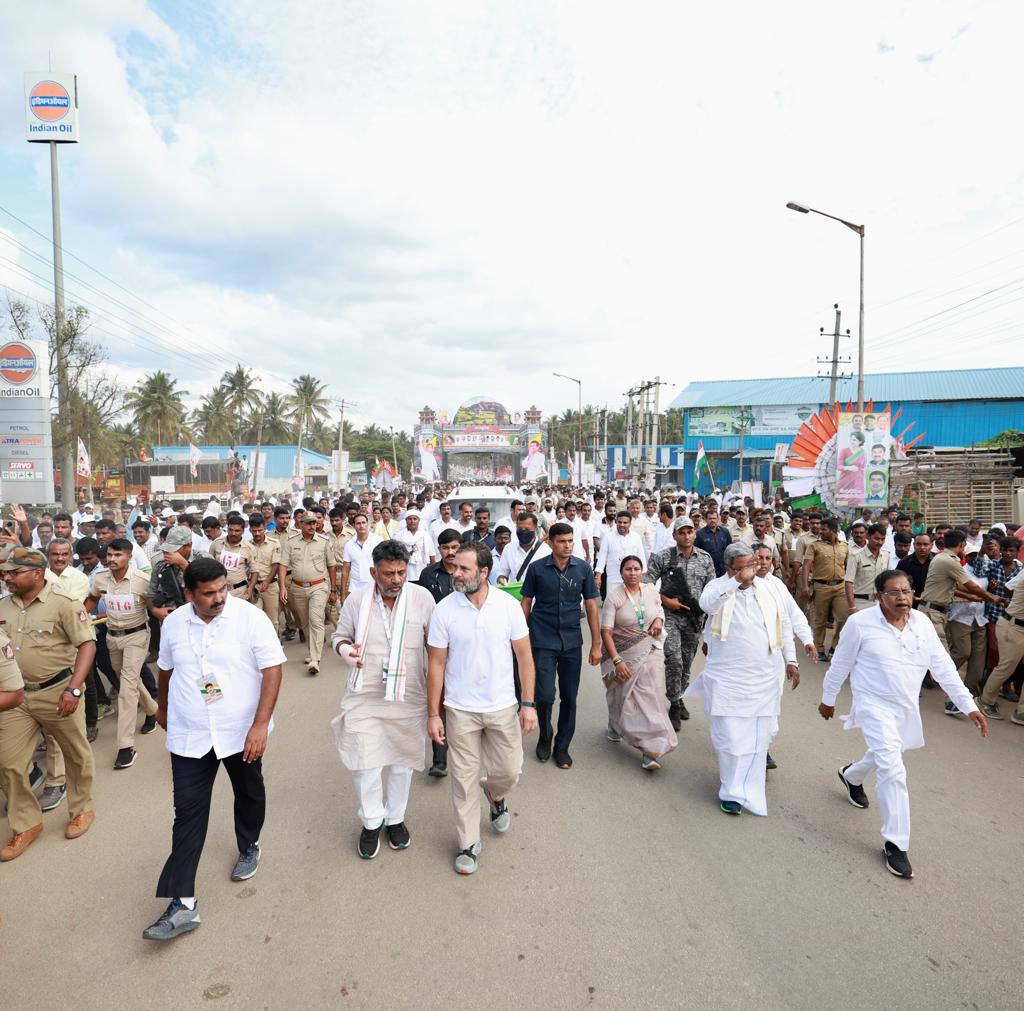 TURUVEKERE (KARNATAKA): Congress leader Rahul Gandhi on Saturday said the objective of the Bharat Jodo Yatra was not 2024 general elections but to unite the people of the country, as he alleged that the BJP-RSS were spreading “violence and hatred”.

Addressing a press conference here during the yatra, he said thousands of crores of media money has been spent in trying to project him in a way which is just “untruthful and wrong”, and the people who care to look carefully will see what his truth is.

Gandhi also said he believes in ‘tapasya’ and wanted an element of suffering in his communication to people and, therefore, he decided to undertake the 3,500 km from Kanyakumari to Kashmir on-foot journey.

He said the yatra’s objective was to bring India together and not the 2024 Lok Sabha elections.

“The objective as I have stated is to bring India together. Objective from my perspective is not the 2024 elections, I am seeing that India is being divided, violence is being spread in our society and this is damaging for our country,” the former Congress chief said.

Gandhi said the yatra is aimed at raising three fundamental issues that are interconnected– violence and hatred “the BJP-RSS (Rashtriya Swayamsevak Sangh) are spreading and the division that they are carrying out”; the massive concentration of wealth being allowed which is destroying India’s economy and resulting in unemployment; and massive and continuous increase in prices.

Talking about his yatra experience and the image that has been built of him over the years allegedly by the BJP, the Congress leader said he stands and has always stood for certain ideas and that disturbs the BJP and the RSS.

“Thousands of crores of media money, media energy has been spent in trying to shape me in a way which is just untruthful and wrong. That machine is going to continue, that machine is very well-oiled and financially-rich. My truth is different and has always been different and people who care to look carefully will see what I stand for and what my truth is,” he said.

“For me, this yatra of course there is a political element to it (yatra) but for me the main purpose of this yatra, I see in the political system a distance that has developed between the political class and our citizens. The idea for me was to go right on the road and go close physically to our people,” Gandhi said.

This is very different from going in a car, or plane, or even reaching out in a press conference through the media, he said.

“There’s no effort in this (presser); it’s easyI am by nature, I believe in tapasya. That has always been my family’s nature. I wanted an element of suffering in this communication with people for myself. I did not want it to be easy. So, I thought, while talking to my people, I can share their suffering. I find that to be a very powerful experience,” Gandhi said.

When one is walking on the road and speaking to people after having suffered a little, communication is better, he said.

“For me, it’s been a learning experience. But frankly, it hasn’t even begun yet. It’s been only 31 days. I can already see the advantages of this communication” Gandhi said.

On the Centre recently banning the Popular Front of India, he said it doesn’t matter who the person spreading hatred in India is and which community they come from.