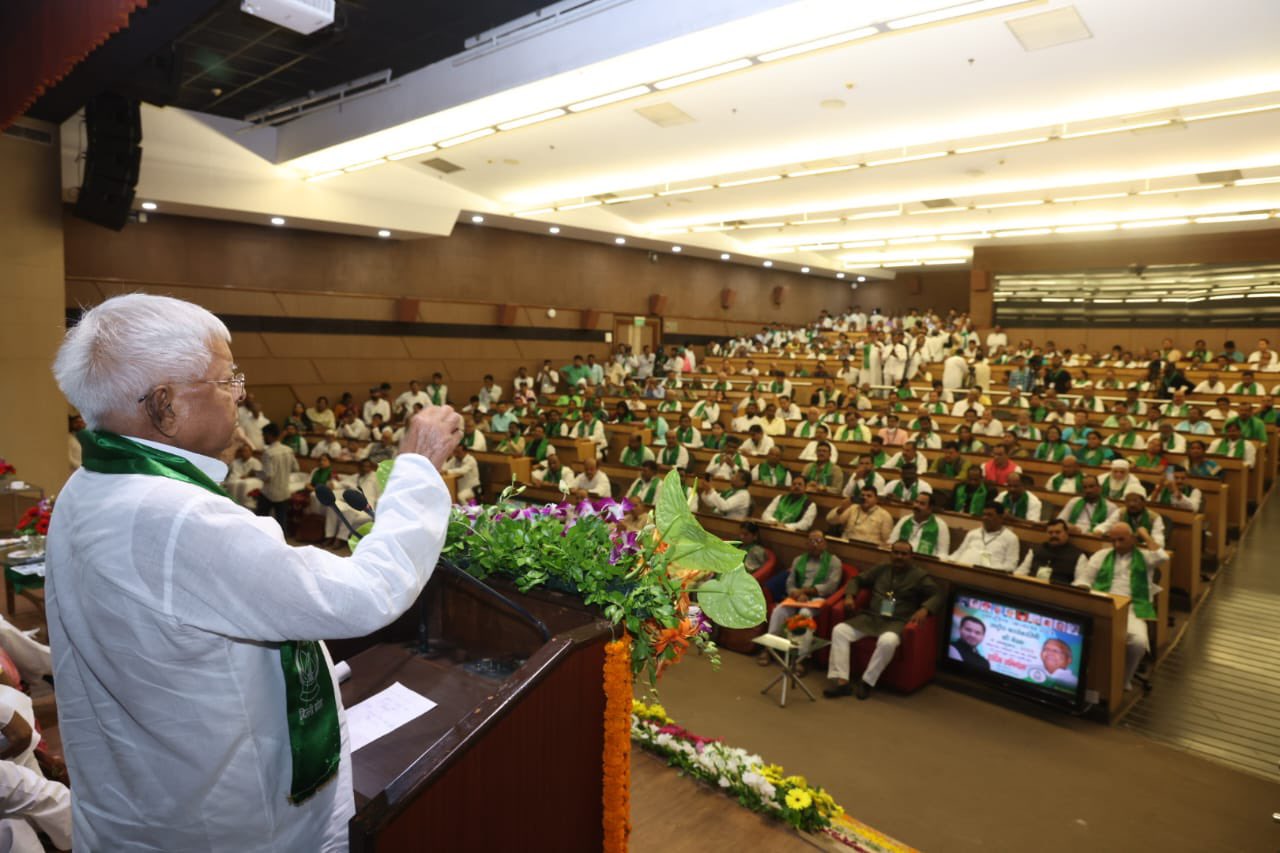 NEW DELHI: The RJD on Sunday said the Opposition has started to come together in several parts of the country and the BJP’s journey from two to 303 seats will start reversing from 2024 as a collective alternative would trump the ”self-centred” politics of Prime Minister Narendra Modi’s rule.

The assertion was made by the party after a meeting of its national executive that was attended by the top brass including RJD chief Lalu Prasad and Bihar deputy chief minister Tejashwi Yadav.

However, RJD’s Bihar unit chief Jagdanand Singh, who is said to be upset with the party ever since his son Sudhakar Singh was forced to resign from the Nitish Kumar government, skipped the meeting, fuelling talk of changes in the party organisation in the state.

Sudhakar Singh attended the meeting but did not answer queries as to why his father had stayed away.

Asked about Jagdanand Singh’s absence, senior party leader and Rajya Sabha MP Manoj Jha said he has close ties with the party’s top leadership and his absence on Sunday cannot undermine the fact of his constant presence over the years.

”He (Singh) may not have come due to certain reasons. I can give it to you in writing that he was with us, is with us, and will remain with us,” Jha told reporters at a press conference after the meeting.

The meeting also saw an upset Tej Pratap Yadav, a minister in the Bihar government and Lalu Prasad’s elder son, who left the meeting in a huff and accused party leader Shyam Rajak of abusing and mistreating his staff.

The meeting, which was addressed by Lalu Prasad, Tejashwi Yadav and senior party leader Sharad Yadav, saw three resolutions being moved and discussed.

”Three important resolutions were put forward — a political resolution which is crucial as it comes at a time when the country is being taken in an abyss of darkness, on foreign policy, and on the economic situation of the country,” Jha said.

He said the thrust of the speeches by Lalu Prasad, Tejashvi Yadav and Sharad Yadav was that the country’s situation is very serious with unemployment at its hightest in five decades.

”The government has no blueprint. If you talk of unemployment, they talk of bulldozer and hijab. Where there should be a willingness to strengthen communal harmony, there they (BJP) are doing Hindu-Muslim. The country in its 75th year needs a new direction,” Jha said.

”They (the three leaders) pointed out that the change in Bihar is not an ordinary one. We have come together putting aside differences and ego. Now this has to be replicated in the whole country. Opposition will sit together, there will be talks and a progressive document will be prepared against unemployment, inflation and in support of communal harmony so that in the 75th year of independence our heritage is not destroyed,” he said.

Jha said the change that is needed has begun from Bihar and Opposition parties are sitting together in different parts of the country.

‘When we sit together, a better alternative will emerge and it would not be an ‘atmamugdh (self-centred)’ person. We have seen the results of self-centred politics in the last eight years which have destroyed all things dear to us,” the senior RJD leader said.

In the context of Opposition unity, Lalu Prasad, Tejashvi Yadav and Sharad Yadav said that all will sit together and issues will be discussed.

Asked if any names were discussed for leading the Opposition camp to take on the BJP in 2024, Jha said it’s not the individual but collectivity that was important.

”We are not buying a shampoo, that this will not work but this will work. Democracy is about collectivity, when collectivity is ended in democracy, it gives rise to Narendra Modis,” the RJD leader said.

”Those who say how can an alternative come about, they should recall 2004, was there a face then, how the ‘Shining India’ came down. Their (BJP’s) journey from two seats to 303, will start going in reverse from 2024,” he said.

Jha claimed that the BJP has been rattled with the Opposition joining ranks.

Elaborating on Lalu Prasad’s remarks at the meeting, Jha said he talked of his history of social justice, challenges posed by the RSS-BJP that could destroy the fabric of the country and the roadmap ahead.

Lalu Prasad said that every person has to unite 20 other people and take real issues to villages, according to Jha.

On the CBI filing a charge sheet against Lalu Prasad and his wife Rabri Devi in connection with the alleged land-for-railway jobs scam, Jha said ”this is BJP’s charge sheet”.

”We don’t want to act on their directions, so a closed case is reopened and you create characters on your own and then you file a charge sheet. We charge the BJP that you have destroyed the character of these institutions,” he said.

On Mohan Bhagwat’s remarks that caste system should be discarded, Jha said such remarks do not behove those who promote caste system.

”Look at the RSS structure, what social justice is there. RJD chief (Lalu Prasad) quoted from MS Golwalkar’s book ‘Bunch of Thoughts’ that what he thought of Kashi Vishwanath temple, the Constitution and reservation,” he said.

At the national convention of the party, Lalu Prasad will officially be appointed the president having been elected unopposed earlier in the day.