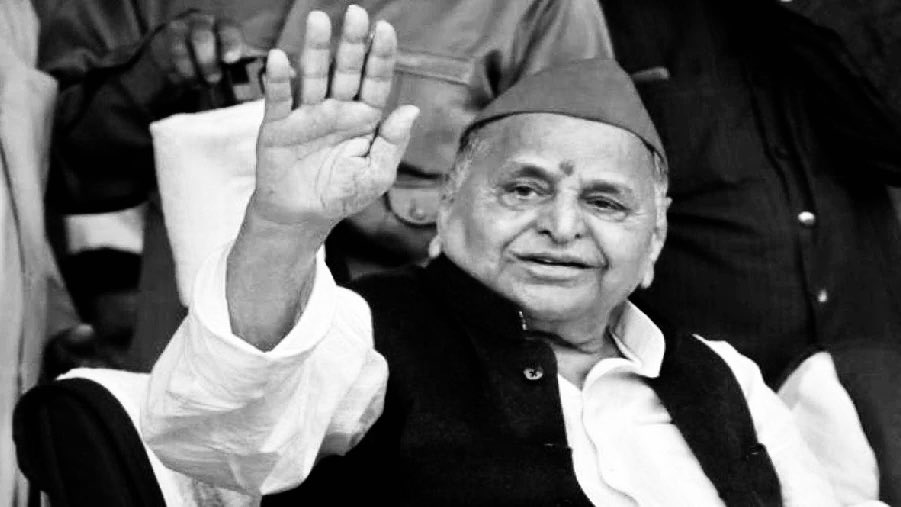 NEW DELHI: Samajwadi Party founder Mulayam Singh Yadav, a veteran of many political battles and a pivot for opposition politics for decades, never went off the radar – even when he was ailing. Trained famously as a wrestler, the 82-year-old SP patriarch, who died Monday after prolonged illness at a Gurugram hospital, was “Netaji” to his many supporters.

Yadav, who founded the SP in 1992 as the campaign for a Ram temple was peaking, was seen as a critical secular counterpoint to the rise of Hindutva politics in the Hindi heartland. “Netaji sansad mein hote hain ya sadak pe,” his supporters would say often, testifying to his connect with the people as well as his national profile. Born on November 22, 1939 into a farming family in Saifai near Etawah in Uttar Pradesh, Yadav spawned the state’s most prominent political clan.

For decades, he enjoyed the stature of a national leader but UP largely remained the “akhara” where Yadav played out his politics, beginning as a teenager who was influenced by socialist leader Ram Manohar Lohia.

For party workers, even when he was no longer the SP president as the mantle passed on to his son Akhilesh Yadav in 2017, the patriarch remained “Netaji”. And his presence on the scene provided the glue that held the Yadav clan together, at least to a degree.

SOCIALIST AND PRAGMATIST A “socialist”, Yadav was open to possibilities in politics. Thanks often to mergers and splits, he had been affiliated with a series of parties — Lohia’s Sanyukt Socialist Party, Charan Singh’s Bharatiya Kranti Dal, Bharatiya Lok Dal and Samajwadi Janata Party. He founded his own SP in 1992.

Yadav struck deals with the Bahujan Samaj Party, the Bharatiya Janata Party and the Congress whenever needed to form or save the governments led by him in Uttar Pradesh.

In 2019, he sprang a surprise by praising Narendra Modi in Parliament, wishing that he would return as prime minister after the next election. This, when his party saw Modi’s BJP as its main rival in UP. The remark baffled analysts.

Just as another comment, back in 2014 at a rally, triggered outrage when he spoke against the death sentence for rapists, saying “boys make mistakes”. And then, there was his advocacy of the idea that India, Pakistan and Bangladesh should form a confederation.

EARLY DAYS Yadav, who took part in student union agitations and briefly taught at an inter college after getting a Political Science degree, first became an MLA in 1967.

The story goes that Nathu Singh, the Socialist Party MLA from Jaswantnagar, wanted him to fight for the seat in the next election. He was impressed with Yadav after meeting him at a wrestling contest.

During his second term as MLA from the same constituency, Indira Gandhi declared Emergency and Yadav was sent to jail, like many opposition leaders.

Back in the ring after the 1975-77 Emergency, Yadav became the state president of the Lok Dal. When the party split, he headed one faction of the state unit.

Yadav was leader of Opposition in the UP Legislative Council and then in the state assembly, before becoming the chief minister in 1989 with the BJP extending outside support to his Janata Dal government.

When the saffron party withdrew support over the Babri Masjid-Ram Janmabhoomi issue in 1990, the Congress kept his government afloat for some months.

The BJP still rakes up the 1990 episode when police opened fire at kar sevaks heading towards Ayodhya’s Babri Masjid, which they wanted demolished. In the 1990s, he was among the key leaders who took on the BJP’s ‘kamandal’ politics.

Kar sevaks razed the 16th century mosque in December 1992, the same year Yadav founded the SP, which began to be seen as an ally of the Muslim community. In November 1993, Yadav again headed a government in UP, supported by the BSP. It collapsed when the ally pulled the rug.

The SP leader then moved to the national stage, being elected to the Lok Sabha in 1996 from Mainpuri. In the 1990’s As opposition parties tried to form a non-BJP alternative to the Congress, Yadav briefly appeared to be in the fray for the prime minister’s post.

But he ended up becoming the defence minister in the United Front government headed by H D Deve Gowda — the Sukhoi fighter jet deal with Russia was finalised during his term. Years later, he would be part of a short-lived coalition of Janata Parivar parties that hoped to fight the 2015 Assembly elections in Bihar together.

In 2003, Yadav became UP chief minister for the third time after the collapse of a short-lived BSP-BJP coalition government.

In 2012, the SP was again in a position to form the UP government. But the senior Yadav stepped aside so that his son Akhilesh could become the state’s youngest CM at 38.

ENDGAME Squabbling in the party and the family led to a coup of sorts by Akhilesh Yadav in 2017. Akhilesh, the son from his first wife Malti Devi – he later married Sadhna Gupta – was at loggerheads with the old guard that included uncle Shivpal Singh Yadav.

As chief minister, the younger Yadav enjoyed popular support within the party as well and wrested it from his father at an SP convention. While the former wrestler’s supporters cried foul, the son projected the takeover as a tough but necessary move.

In the final years of his life, the ailing patriarch played a diminishing role in the affairs of the party that he had founded. They still called him “Netaji” though.