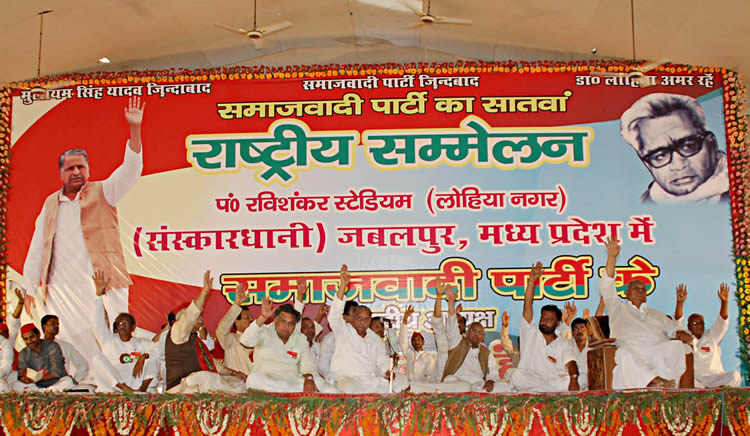 NEW DELHI: President Droupadi Murmu, Prime Minister Narendra Modi and leaders cutting across the political spectrum condoled the death of Samajwadi Party (SP) patriarch Mulayam Singh Yadav on Monday as they termed his demise an “irreparable loss” that marks “the end of an era in Indian politics”.

Top political leaders also took to Twitter to express their condolences on the passing away of the veteran Samajwadi leader with Congress president Sonia Gandhi saying “the voice of socialist ideas has fallen silent with the demise of Mulayam Singh Yadav.”

Besides the President and the Prime Minister, several state chief ministers also condoled the death of the three-time chief minister of Uttar Pradesh.

“Mulayam Singh Yadav Ji served people diligently and devoted his life towards popularising the ideals of Jayaprakash Narayan and Ram Manohar Lohia. He was a key soldier for democracy during the Emergency. He distinguished himself in UP and national politics,” the prime minister said in a series of tweets.

Shri Mulayam Singh Yadav Ji was a remarkable personality. He was widely admired as a humble and grounded leader who was sensitive to people’s problems. He served people diligently and devoted his life towards popularising the ideals of Loknayak JP and Dr. Lohia. pic.twitter.com/kFtDHP40q9

As defence minister, Yadav worked for a stronger India and his parliamentary interventions were insightful, Modi said.

In her message in Hindi, Murmu said,”Dharti Putra’ Mulayam ji was a veteran leader connected with the land. He was respected by people of all parties. My deepest condolences to his family members and supporters!”

Taking to Twitter, Union Home Minister Amit Shah said,”during the Emergency, he raised his voice for the restoration of democracy. His death marks the end of an era in Indian politics.”

He also said Mulayam Singh Yadav will always be remembered as a grassroots leader.

In a letter to Yadav’s son Akhilesh expressing condolences, former Prime Minister Manmohan Singh said the SP patriarch was a leader of high esteem who was respected by everybody irrespective of party lines.

“He (Yadav) was an icon of the socialist movement…He was a great parliamentarian and a distinguished administrator who devoted his whole life to the service of the poor and other backward communities,” Singh said.

“My wife joins me to convey to you and other members of your family our deepest condolences on this sad occasion. May God give all of you the strength to bear this great loss with courage and fortitude,” the former prime minister said in his letter.

I am deeply saddened by the passing away of my longtime colleague and friend Shri #MulayamSinghYadav My condolences to his family and followers. He was deeply committed to the secular and socialist political traditions. Will miss him very much. @samajwadiparty @yadavakhilesh pic.twitter.com/KpcQil8hzP

Rahul Gandhi, who is taking part in his party’s Bharat Jodo Yatra, also held a five-minute “shok sabha” in the memory of the Samajwadi Party patriarch at his resting camp in Karnataka

and observed silence for two minutes.

Bihar Chief Minister and JD(U) chief Nitish Kumar said,”He (Yadav) was a towering socialist leader who never compromised with the interests of the poor and the farmers.”

PDP chief and former Jammu and Kashmir chief minister Mehbooba Mufti tweeted that Yadav “always stood by the minorities and deprived communities. We should learn lessons from his life…He worked for the Hindu-Muslim brotherhood and stood against communal forces who have become powerful in the country.”

Saddened by the demise of former CM of UP and senior leader of @samajwadiparty Thiru. Mulayam Singh.

One of the tallest figures in Indian Politics who stood for reservation for the OBC, Thiru Mulayam Singh was deeply committed to secular ideals. His death is an irreparable loss.

Yadav, who was born in a family of farmers and went on to spawn the state’s most prominent political clan, died at a Gurugram hospital on Monday after a prolonged illness. The cremation will take place on Tuesday at his native Saifai village in Uttar Pradesh.