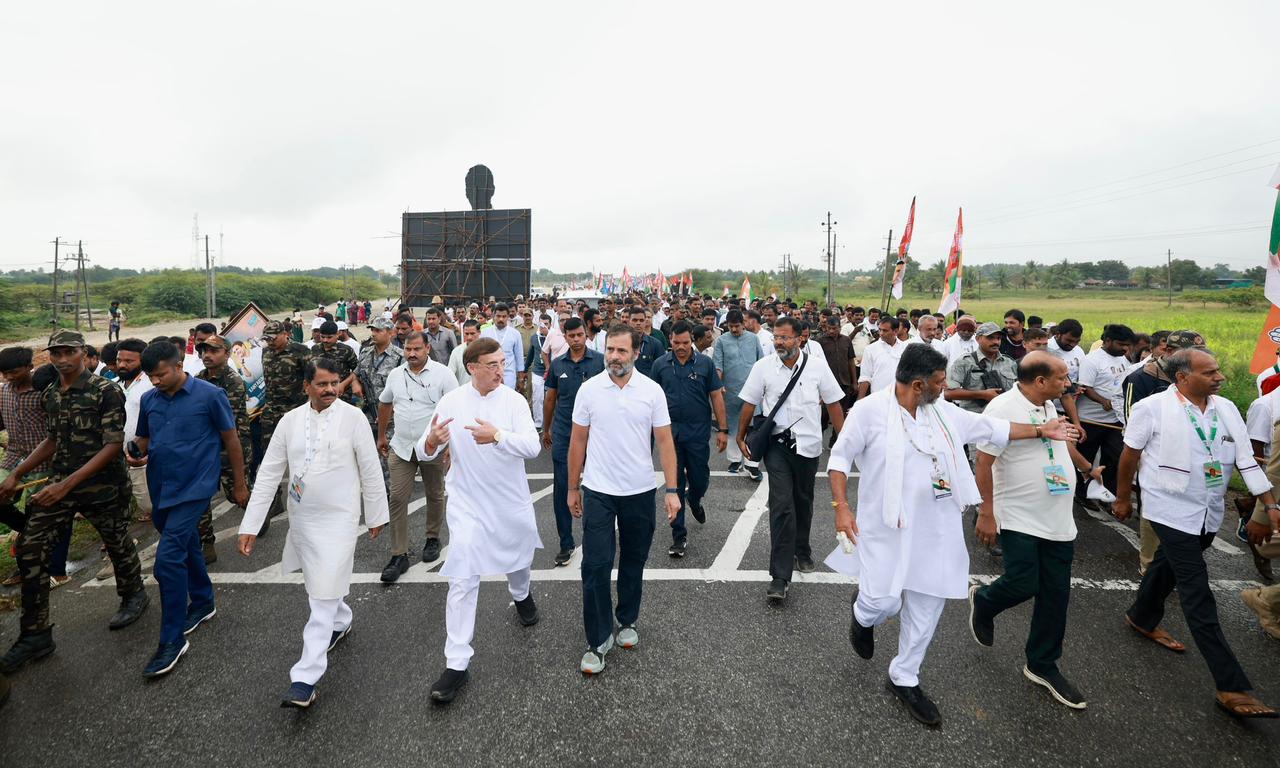 HINGALGANJ: One month into the Bharat Jodo Yatra, the Congress is looking at some visible gains, with the party donning a revived, aggressive look. Currently in power on its own in just two states — Chhattisgarh and Rajasthan — the Congress has embarked on the marathon 3,570 km journey eyeing political and electoral revival, riding on the enthusiasm of former party president Rahul Gandhi.

Party leaders are upbeat as the yatra has entered its 34th day. They list three clear positive outcomes – an activated Congress which has hit the ground running leaving the past inertia behind, an interactive top brass which is directly engaging the people, and a mobilised organisation which was dormant for many years.

AICC general secretary Jairam Ramesh, one of the key drivers of the exercise, sees the yatra as a psychological boost for the party.

”I think what the yatra has done is show to the Congress party that we can do it. We are on the roads, on the streets, we are fighting the BJP. We are taking the battle to their camps. We are raising fundamental issues. We are not reactive. In fact, now the BJP is reacting to us and that I think is the greatest contribution of the yatra. It is psychological rather than electoral,” Ramesh said.

He expressed confidence that the gains would consolidate as 117 Bharat Yatris traverse the entire 12-state route.

Congress strategists claim that the principal aim is to connect with the masses and raise their issues, as decided at the Udaipur Chintan Shivir where both Congress president Sonia Gandhi and Rahul Gandhi acknowledged that the party was disconnected from the ground.

Leaders say Rahul Gandhi has met more than 550 people individually while walking during the yatra, and interacted with several pressure groups with specific concerns.

”This is for the first time in many years that the Congress is being discussed in remote areas, villages, and people are in awe of the fact that Rahul Gandhi is walking all the way,” former Madhya Pradesh chief minister Digvijay Singh, who heads the yatra organising committee, said.

In many ways, the yatra is shaping up as the former Congress president’s personal image building exercise, with senior party leaders repeatedly claiming that India will see a new Rahul Gandhi after the journey.

The party’s social media department has been careful to project the affectionate side of their leader — tying his mother’s shoelaces, playing with children, hugging an elderly woman, and so on. The idea is to fight the BJP’s narrative of ”Rahul Gandhi being a reluctant leader and a tourist politician who takes many holidays”.

”This is a transformational moment for Rahul Gandhi. His endurance and clarity of thought are emerging in the yatra,” said Jairam Ramesh, adding that the yatra has seen three impromptu press conferences by the Congress scion, who has taken two clear ideological lines.

One, he has said the Congress does not differentiate between minority and majority communalism and will fight both. Two, he has clarified that the Congress is against monopolies and not industrialists.

These positions bring some clarity to the party’s otherwise hazy lines on secularism and economics, and could be significant in the wake of the party aligning with radical forces in the last Assembly elections in West Bengal and Kerala.

The Congress drew a blank in Bengal, while in Kerala, the Left Democratic Front stormed to power bucking anti-incumbency trends in a record win.

Apart from clear ideological positioning, the yatra is aiding the Congress to create an electoral impact in the states it is touching.

In BJP-ruled Karnataka, the party views public response as ”phenomenal”.

”The response we got in Tamil Nadu and Kerala was expected but the people’s support in Karnataka has been tremendous,” an AICC office-bearer said.

”The party has crossed the JDS and BJP strongholds in Karnataka and has generated a buzz with hopes of similar resonance in YSRCP-ruled Andhra Pradesh and TRS-ruled Telangana,” he added.

Karnataka Congress leaders, however, feel the yatra should have covered more Assembly segments rather than just the 20 constituencies it will enter and the 50 it will touch out of the 224 constituencies.

The Congress has 70 MLAs in the state after 14 left the party in the recent past.

”The ongoing yatra has activated the party cadre in every assembly segment and has unified the state leadership due to the bonhomie created by it,” Surjewala told PTI.

He said it has also helped highlight major issues of corruption, price rise and unemployment, and has given an opportunity to Rahul Gandhi to interact with non-political segments.

”The BJP is now on the defensive and is resorting to copycat syndrome by planning similar meetings, but they have not picked up the gauntlet of walking 511 km through the state,” Surjewala added.

While the journey continues, it remains to be seen if it will impact the Congress’ flailing electoral fortunes.

Also, the absence of opposition leaders from the yatra is a matter of debate though the Congress claims the exercise was never aimed at forging opposition unity.

The party had, however, at the start of the yatra appealed to leaders to participate. The only participation from the opposition so far has been that of DMK chief and Tamil Nadu chief minister MK Stalin, who flagged off the yatra from Kanyakumari along with Rahul Gandhi.

The Congress maintains it invited only Stalin and no one else officially.

As it appears, the grand old party views Bharat Jodo Yatra as a tool for self renewal and hopes to land at the centre of opposition space by the end of the journey early next year.

In this article:Congress s, One month of Bharat Jodo, Opposition space