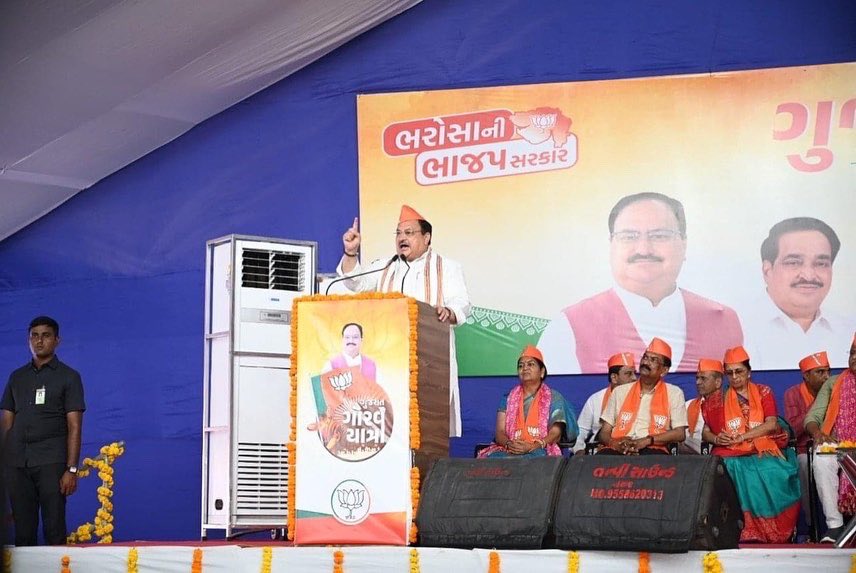 NEW DELHI: Bharatiya Janata Party (BJP) president JP Nadda on Wednesday launched the ”Gaurav Yatra” of the party in poll-bound Gujarat from the temple town of Bahucharaji and said the yatra is not restricted to BJP or Gujarat but will establish the ”pride” of India.

He accused Congress of halting development and said the opposition party is ”stuck and lost”. In the run-up to the high-stake Assembly elections, due in December this year, the BJP will launch five such yatras in two days that will cover different parts of Gujarat.

Nadda on Wednesday flagged off the Yatra, comprising vehicles, from Bahucharaji in Mehsana district. The temple of the Hindu goddess Bahuchara attracts a large number of devotees and is a major pilgrimage centre. The yatra launched from the temple town will conclude at Mandvi in Kutch on October 20. Several Union ministers and BJP leaders from Gujarat will join the yatra at different locations. ”It is not the ‘Gaurav Yatra’ of BJP or Gujarat but the one to establish India’s pride. This yatra is the story of a journey from Gujarat to India,” Nadda said.

He used the analogy of planting trees of babool (thorny acacia) and mangoes to take a swipe at Congress. ”Like what (Union Minister Parshottam) Rupalaji told you, there used to be a jungle of babool here. If a party plants babool then you will get babool only. If they plant babool, how will you get mangoes? They were people who planted babool. What else did Congress do year after year?” he asked the audience.

Besides Rupala, former deputy CM Nitin Patel and other leaders of the BJP were present at the event.

”They (Congress) made brothers and regions fight among themselves. They did not supply water where it was needed. They halted and diverted the journey of development….Now they are themselves stuck and lost,” Nadda alleged.

He said Prime Minister Narendra Modi was very much worried about the development of Gujarat after he became chief minister of Gujarat (in October 2001).

Nadda recalled that he took CM Modi to Himachal Pradesh for his felicitation. He said Modi called his Madhya Pradesh counterpart Digvijaya Singh of Congress to discuss the issue of the Narmada river water at 8 am on the very same day.

”When Modi became the chief minister for the first time, I took him to Himachal Pradesh for his welcome. There, Modiji had called Digvijaya Singh, the then CM of Madhya Pradesh. On the very same day at 8 am, he (Modi) discussed the Narmada water issue with him,” he said.

Nadda has roots in Himachal Pradesh. ”I am telling you this because Modi was feeling agonised about the development of Gujarat from the very beginning; the Gujarat which Sardar Patel dreamed of turning green. Three decades passed and they (Congress) took no notice of it. If anyone worked to show it (Gujarat) a direction, it was Narendra Modi, the then chief minister,” the BJP president said.

Nadda said Modi gave a new dimension to development by inviting the Tatas to set up a Nano car plant in Gujarat after West Bengal chief minister Mamata Banerjee didn’t allow the project.

He said the BJP government in Gujarat is ”proactive, prop-responsible, pro-responsive, and one which understands people’s pain”.

Speaking about the Gaurav Yatra, Nadda said, ”It is not the ‘Gaurav yatra’ of BJP or Gujarat but the one to establish India’s pride…I congratulate you for the fact that Gujarat is the ‘Gangotri’ of India which is sprinting under the leadership of Modi; a self-reliant, developed India that takes everyone along,” he said.

”When we talk of the ‘Gujarat model’ in Delhi, we understand that the state has shown a new direction to the country..,” he added. Nadda is scheduled to launch the yatra on another route from the temple town of Dwarka. Union Home Minister Amit Shah will launch the Gaurav Yatra on Thursday on three routes- from Sant Savaiyanath temple at Zanzarka village in Ahmedabad district while the other two routes will be from Unai Mata temple in Vansda taluka of Navsari district.

Notably, the first ‘Gaurav Yatra’ was taken out by the then chief minister of Gujarat, Narendra Modi, after the communal riots and before the 2002 state assembly elections. The second ‘Gaurav Yatra’ was organised in 2017 ahead of that year’s state polls.