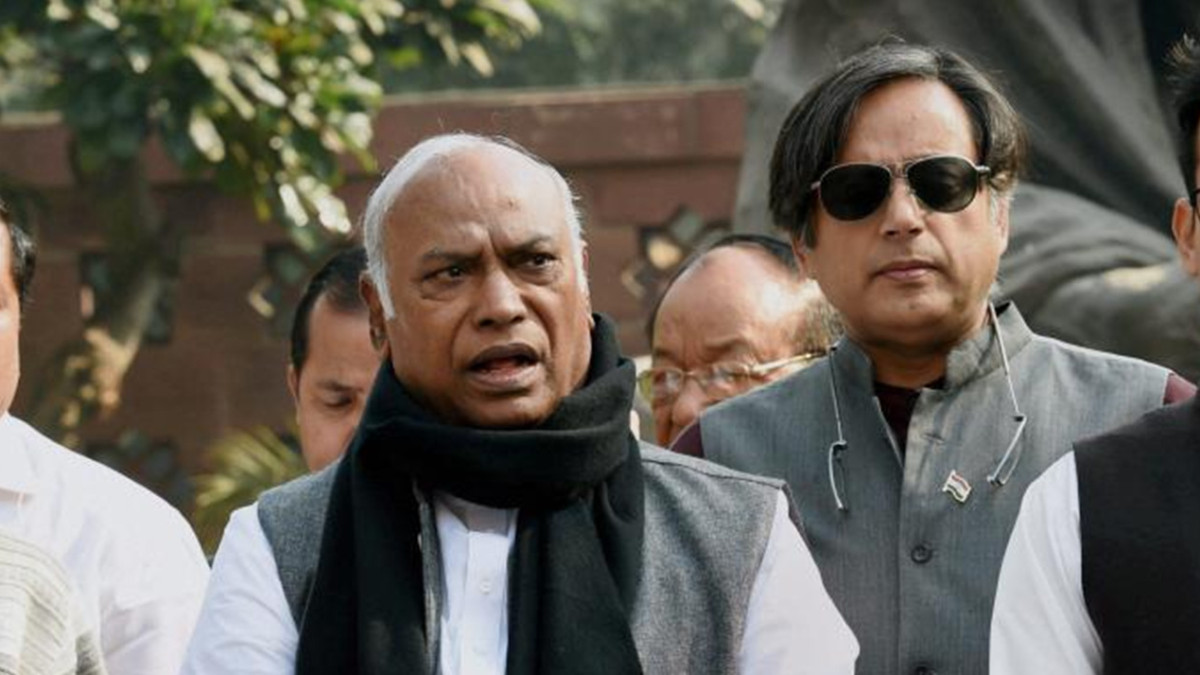 NEW DELHI: Senior Congress leaders Mallikarjun Kharge and Shashi Tharoor will face-off in an electoral contest on Monday for the post of AICC chief, as the party gets set to have a non-Gandhi president in over 24 years.

Over 9,000 Pradesh Congress Committee (PCC) delegates form the electoral college to pick the party chief in a secret ballot.

Voting would also take place at the AICC headquarters here and at over 65 polling booths across the country in an electoral contest which is taking place for the sixth time in the party’s 137-year history.

While party chief Sonia Gandhi and Congress general secretary Priyanka Gandhi Vadra are expected to vote at the AICC headquarters here, Rahul Gandhi will be voting at the Bharat Jodo Yatra campsite in Karnataka’s Sanganakallu in Ballari along with around 40 other Bharat Yatris who are PCC delegates.

Kharge is considered the firm favourite for his perceived proximity to the Gandhis and backing by senior leaders, even as Tharoor has pitched himself as the candidate of change.

During the campaign, even though Tharoor has raised issues of uneven playing field, both candidates and the party have maintained that the Gandhis are neutral and that there is no “official candidate”.

Asked about the significance of the polls, Congress general secretary in-charge communications Jairam Ramesh told PTI that he has always believed in the Congress model of evolving a consensus for such positions.

The most famous practitioner of this approach in the post-Nehruvian era was K Kamaraj, he noted.

“As we approach E-Day tomorrow this belief has become even more stronger. The reasons for this are pretty obvious,” Ramesh said without elaborating.

“I am not at all convinced that organisational elections actually strengthen the organisation in any way. They may serve individual purposes but their value in building a collective spirit is doubtful,” he said.

Even so, the very fact that elections are taking place are of some significance, he added.

“But I consider them of less institutional importance than the historic Bharat Jodo Yatra which is a transformational initiative for the Congress and for Indian politics as well,” Ramesh said.

Though the campaign has been largely about a roadmap for the party which the two candidates have elaborated upon during their meetings with PCC delegates at various headquarters of the party in states, it has also seen complaints and claims of an uneven playing field by the Tharoor camp.

The contrast in the campaigns has been stark, while Kharge’s campaign has seen several senior leaders, PCC chiefs and top leaders receiving him at the state headquarters visited by him, Tharoor has mostly been welcomed by young PCC delegates with PCC chiefs mostly absent from his events.

Tharoor has underlined during his campaign that he is the candidate of change while Kharge of status quo.

He has also claimed that youngsters and people in lower levels of the party are supporting him, while seniors are backing his rival.

Kharge, on his part, has highlighted his experience, coming up the organizational ranks over decades and his ability to take everyone along.

Both the leaders have emphasised that the Gandhis hold a special place in the party with Kharge saying that he would seek their “guidance” and “suggestions”, and Tharoor asserting that no Congress president can function keeping a distance from the Gandhi family as their DNA runs in the party’s blood.

The last electoral contest for the top post of the party took place in 2000 when Jitendra Prasada had suffered a crushing defeat at the hands of Sonia Gandhi.

Also, with Sonia Gandhi, Rahul Gandhi and Priyanka Gandhi Vadra deciding not to be in the running for the party president’s post, a non-Gandhi would be at the helm after over 24 years.

Congress’ central election authority chairman Madhusudan Mistry said on Wednesday that the Congress presidential polls will be held by a secret ballot and no one will get to know who voted for whom.

He had asserted that a level-playing field had been ensured for both candidates.

Mistry had also demonstrated to reporters the ballot boxes, ballot paper and how the votes would be cast.

He had said the sealed boxes would be transported to Delhi, kept in a strong room at the AICC headquarters and opened in Delhi. The ballot papers would be mixed before counting starts.

Kharge and Tharoor not only possess contrasting demeanour but have had an equally disparate political journey.

On the one side, there is 80-year-old Kharge, a grassroots politician and a hardcore loyalist of the Gandhi family and on the other is 66-year-old Tharoor – articulate, erudite and suave – who is known for speaking his mind and joined the Congress in 2009 after a long stint at the United Nations.

The contrast is not limited to their demeanour and thinking but also their backgrounds — while Kharge was born in a poor family at Varavatti in Bidar district, did his schooling and BA as well as Law in Gulbarga, Tharoor was born in London and has a phenomenal education background.

Tharoor, who hails from the Nair community of Kerala, has studied at premier institutions in India and the US, including St Stephen’s College in Delhi and Fletcher School of Law and Diplomacy in Massachusetts.

He completed a Ph.D. in 1978 from the Fletcher School of Law and Diplomacy.

A leader with more than 50 years of experience in politics, Kharge, who was elected MLA for nine times in a row and has been pitched as a Dalit leader by his party colleagues, has seen a steady rise in his career graph from humble beginnings as a union leader in his home-district of Gulbarga, now Kalaburagi.

The Congress presidential poll will take place on October 17 and the results will be out on October 19.