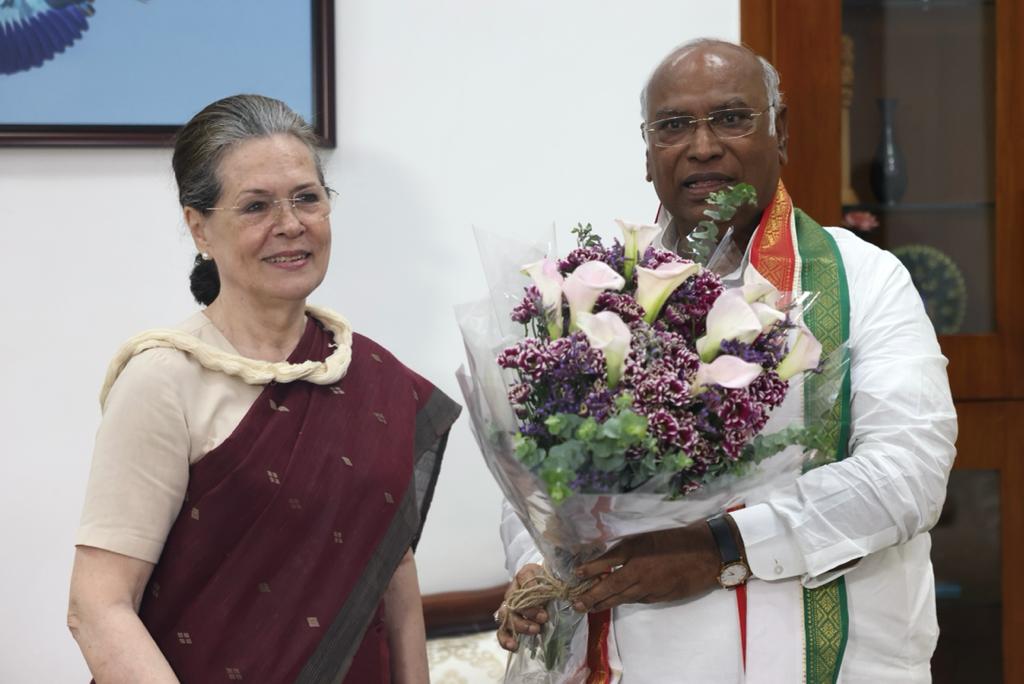 Kharge defeated Member of Parliament from Thiruvananthapuram Shashi Tharoor in the October 17 Congress’ Presidential polls, which saw over 9,500 delegates across the country voting.

A leader with more than 50 years of experience in politics, he is also the second AICC President from Karnataka after S Nijalingappa and also second Dalit leader after Jagjivan Ram to hold the post.

Many congratulations to Shri @kharge for being elected as the President of Indian National Congress.

Kharge was elected MLA for nine times in a row, seeing a steady rise in his career graph from humble beginnings as a union leader in his home district of Gulbarga (renamed as Kalaburagi).

He joined the party in 1969 and went on to become President of the Gulbarga City Congress Committee.

That Kharge was unconquerable at the hustings was mirrored until 2014 Lok Sabha polls in which he bucked the Narendra Modi wave that swept Karnataka, particularly Hyderabad-Karnataka region, and had won from Gulbarga with a margin of over 74,000 votes.

He has won from Gurmitkal assembly constituency nine times before he plunged into the Lok Sabha poll arena in 2009 and has been a two time MP from Gulbarga parliamentary segment.

However, in the 2019 Lok Sabha polls the veteran leader was defeated by BJP’s Umesh Jadhav in Gulbarga by a margin of 95,452 votes.

For Kharge, popularly known as “solillada Saradara”, (a leader without defeat), this was the first electoral loss in his political life spanning more than five decades.

A hard-boiled Congressman and loyal to the core to the Gandhi family, Kharge has played multiple roles in different ministries that has enriched his experience as an administrator.

He has also served as the leader of the opposition in Karnataka Assembly and President of Karnataka Pradesh Congress Committee.

Kharge was leader of the Congress party in Lok Sabha from 2014 to 2019 but could not become the leader of opposition, as the grand old party could not get the post as its numbers were less than the mandated 10 percent of the total number of seats in the Lower House.

He has served as Union Cabinet Minister for Labour and Employment, also Railways and Social Justice and Empowerment- in the Manmohan Singh-led UPA government.

He had also held various portfolios in successive Congress governments that governed the state.

He was Home Minister of Karnataka in one of the most trying times, under S M Krishna as the Chief Minister, as the tenure saw kidnapping of Kannada thespian Rajkumar by the notorious poacher Veerappan and the Cauvery river water conflict, both of which had created a law and order situation in the state.

Kharge was elected unopposed to the Rajya Sabha from Karnataka in June 2020 and was the 17th Leader of the Opposition in Upper House until recently, ahead of his resignation from the post to contest the Congress’ Presidential election. He had succeeded Ghulam Nabi Azad as LoP in February last year.

He was several times seen as a top contender to become the Chief Minister in Karnataka, but could never occupy the post.

“Why do you keep saying Dalit again and again? Don’t say that. I’m a Congressman,” Kharge has said several times in the past, whenever the Dalit CM topic cropped up with him as the contender.

Sober by temperament and nature, Kharge has never landed in any major political trouble spot or controversy.

Born in a poor family at Varavatti in Bidar district on July 21, 1942, he did his schooling and BA as well as Law in Kalaburagi. He was into legal practice for some time before plunging into politics.

He is a follower of Buddhism and is the founder-chairman of Siddharth Vihar Trust that has built the Buddha Vihar complex in Kalaburagi.

Married to Radhabai on May 13, 1968, they have two daughters and three sons. One son, Priyank Kharge is a MLA and a former Minister in Karnataka.

A vocal critic of the Narendra Modi-led government, Kharge’s elevation to head the Congress is expected to give a boost to the cadre amid hopes that it would unify the party leadership in the state that goes to Assembly polls by April next year.