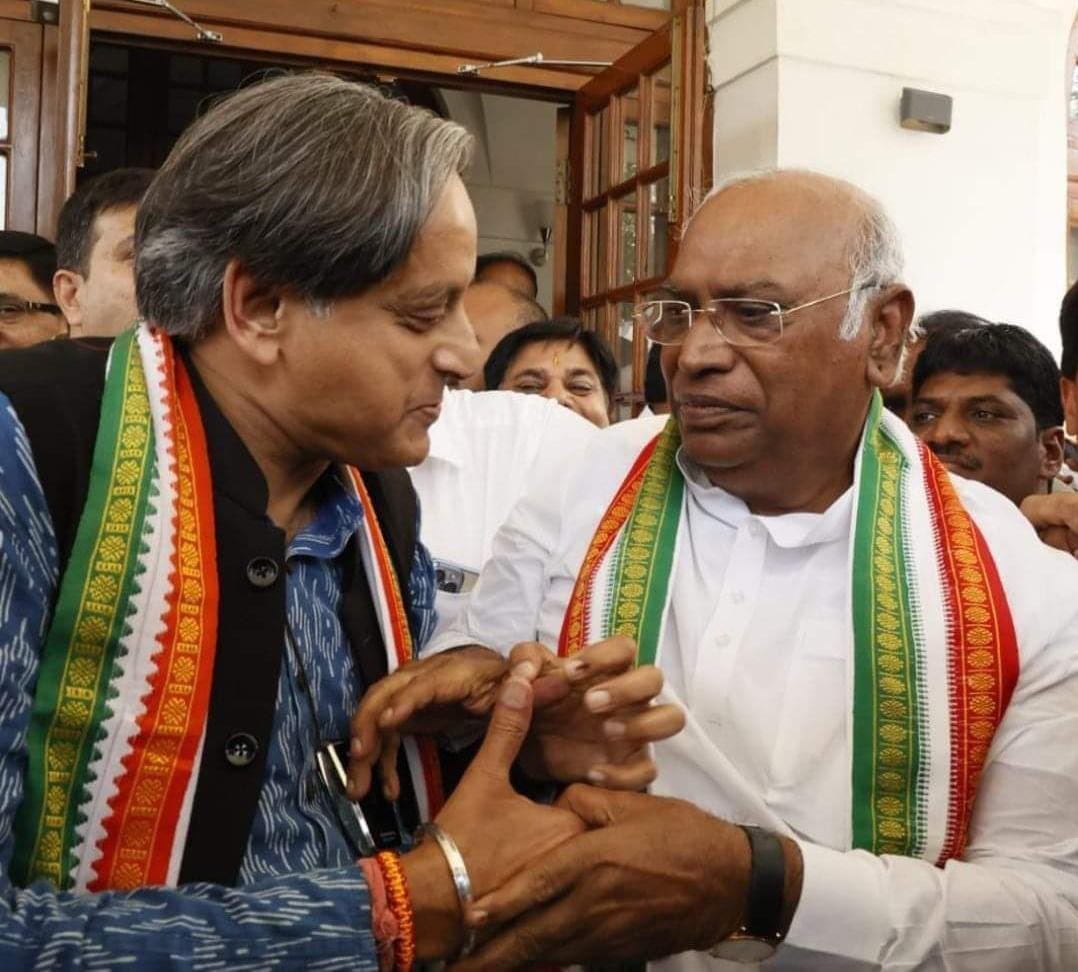 NEW DELHI: As Mallikarjun Kharge won the Congress president poll, his electoral rival Shashi Tharoor on Wednesday said the “democratic contest” has galvanised vibrancy at all levels and has prompted a healthy and constructive discussion on change, which will serve the party in good stead in the future.

Tharoor also claimed that the Congress’ revival has begun.

In a statement, Tharoor said the Nehru-Gandhi family has held, and will always hold, a special place in the hearts of Congress party members.

It is a great honour & a huge responsibility to be President of @INCIndia &I wish @Kharge ji all success in that task. It was a privilege to have received the support of over a thousand colleagues,& to carry the hopes& aspirations of so many well-wishers of Congress across India. pic.twitter.com/NistXfQGN1

“It is my hope and belief that the family will remain the foundational pillar of the Congress, our moral conscience and ultimate guiding spirit. In particular, the spectacular success of the ongoing Bharat Jodo Yatra is a testament to the family’s enduring appeal to the masses,” said the MP from Kerala who got 1,072 votes against Kharge’s 7,897.

He said that in a true celebration of inner-party democracy, over 9,500 delegates of the Congress cast their vote in the elections for the post of party president.

“Today, the final verdict has been in favour of Mallikarjun Kharge ji. I would like to convey my warm congratulations to him for his victory. The decision of the party delegates is final and I accept it humbly,” Tharoor said.

Called on our new President-elect Mallikarjun @kharge to congratulate him & offer him my full co-operation. @incIndia has been strengthened by our contest. pic.twitter.com/fwfk41T93q

It is a privilege to be a member of a party that allows its workers to choose their president, he said.

“Our new president is a party colleague and senior who brings ample leadership and experience to the table. Under his guidance, I am confident that we can all collectively take the party to new heights,” Tharoor said in his statement.

Hailing the contribution of outgoing president Sonia Gandhi, Tharoor said the party owes an irredeemable debt to her, for her nearly 25 years of leadership of the party and for being “our anchor during our most crucial moments”.

“Her decision to authorise this election process, which has given us new pathways to the future, is undoubtedly a fitting testament to her sagacity and vision for our party. I hope she continues to guide, motivate and inspire the party’s new leadership team in overcoming the challenges ahead,” he said.

He also thanked former president Rahul Gandhi and Priyanka Gandhi Vadra for “doing their own bit to support free and neutral elections”.

Tharoor also thanked delegates who have come together to participate in these elections.

“My immense gratitude, as well, to the innumerable and often anonymous ‘karyakartas’ who dedicatedly worked overtime to ensure that these elections were conducted in a constructive spirit for the betterment of our party,” he said.

“I have always expressed the view that these elections, irrespective of the outcome, must ultimately strengthen the party. It gives me immense personal satisfaction that this has clearly been the case. Our democratic contest has galvanised vibrancy at all levels and has prompted a healthy and constructive discussion on change, which I believe will serve the party in good stead in the future,” Tharoor said.

He also congratulated party’s central election authority chairman Madhusudan Mistry and his colleagues for their efforts to make the poll process possible.

“It is our duty to lead the nation to the bright democratic future envisaged by the founders of our Republic. The ideals of a pluralist, prosperous and egalitarian India that inspired Mahatma Gandhi, Nehruji and Dr Ambedkar must be fought for with renewed determination in the face of the onslaught on our most precious values by the ruling party and the forces it has unleashed,” he said.

Tharoor said he looks forward to working with Congress colleagues to face the challenges ahead, asserting that the revival of our party has truly begun today.

Tharoor had pitched himself as the candidate of change and though he repeatedly raised the issue of uneven playing field in the polls, he maintained that the Gandhi family assured him of neutrality.