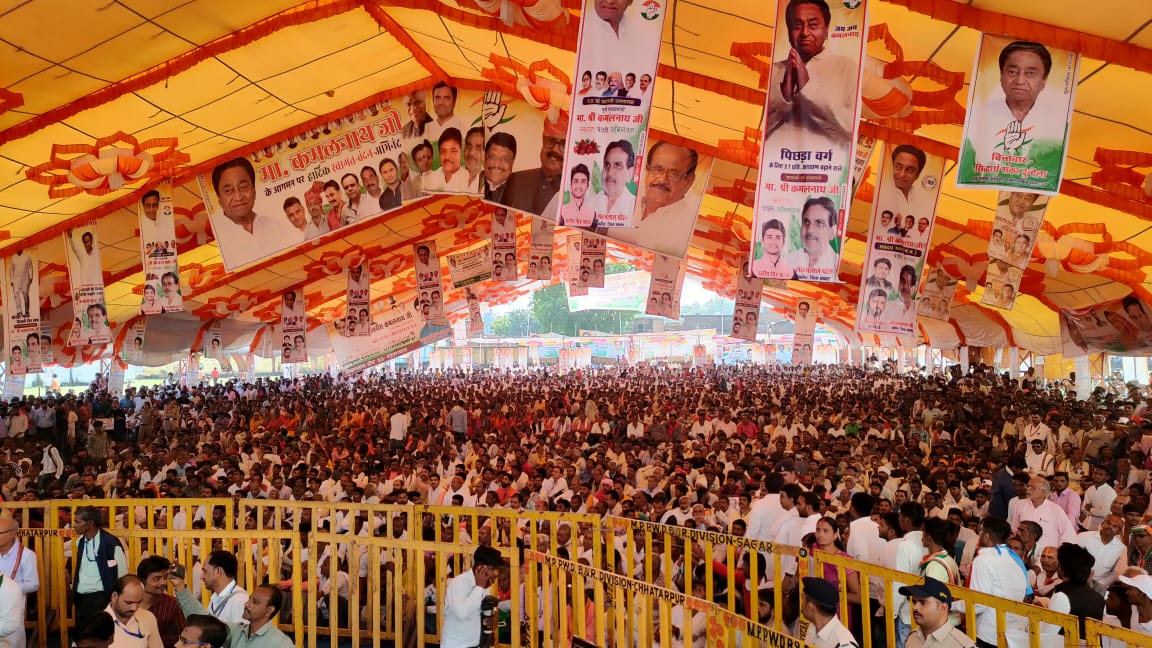 BHOPAL: Madhya Pradesh Congress chief Kamal Nath has expressed confidence that his party would return to power in the state after the Assembly elections next year, and said it would then waive the loan of farmers and restore the old pension scheme for the state government employees.

But the ruling Bharatiya Janata Party (BJP) took a swipe at the Congress, saying its promises were “hollow” as people have seen what happened under the grand old party’s rule last time.

Assembly polls in Madhya Pradesh are due in November 2023.

Addressing a rally at Bada Malhera town in Chhatarpur district on Thursday, Nath said, “After 11 months, Congress is going to form its government in Madhya Pradesh and soon after taking over the reins of the state, the party-led dispensation will waive the loan of farmers and restore the old pension scheme for the state employees.” In 2018, the Congress had returned to power in the state after a gap of 15 years by riding on the poll promise of waiving farmers’ loans. However, the government led by Kamal Nath had collapsed in March 2020 -in 15 months – following a revolt by the loyalists of the then Congress leader Jyotiraditya Scindia, who later joined the Bharatiya Janata Party (BJP) along with his supporters.

Nath accused the BJP of indulging in politics of dividing people on caste and communal lines, and added that the Congress believes in uniting them.

Hitting out the BJP for “not doing anything” for the people despite being in power for 18 years in the state till now, the Madhya Pradesh Congress Committee (MPCC) president taunted the ruling party, saying that it has taken the state to number one position in terms of farmers’ suicide, atrocities against women and unemployment.

He asked Chief Minister Shivraj Singh Chouhan to tell the citizens how his government would provide jobs to lakhs of unemployed youths in the state.

“Prime Minister Narendra Modi had promised to provide employment to the two crore youths every year and also assured that farmers’ income would be doubled, but his government has failed to do anything on that front. That is why, they (BJP leaders) are playing politics of nationalism and talk about China and Pakistan to divert people’s attention from core issues,” he said.

The Congress veteran said BJP leaders need not teach his party about nationalism.

“Congress is a party of true nationalists. BJP leaders should name a family from their party who were freedom fighters, while Congress has a long tradition of having such revolutionary leaders,” he said.

The Congress has always united people and it believes in doing so as it has been the party’s culture right from the inception,” the former chief minister said.

No other country in the world is like India as it is united despite its diversity, he said, adding that this culture of uniting people is under attack now.

Meanwhile, state Home Minister Narottam Mishra on Thursday took a dig at Nath over his poll promises, saying that the Congress leader was unable to run the government and he should tell people how leaders of his party deserted him.

“When he was unable to run the government that was already in power, how can he come to power again in the state? People understand everything. Nothing will happen with such promises. People had seen their 15-month-long rule and suffered in that regime as corruption was at its peak,” he alleged.

“They have also seen what happened to their written promises of farm loan waiver and solving unemployment problems. All these promises are hollow and there is no strength in them,” the minister added.