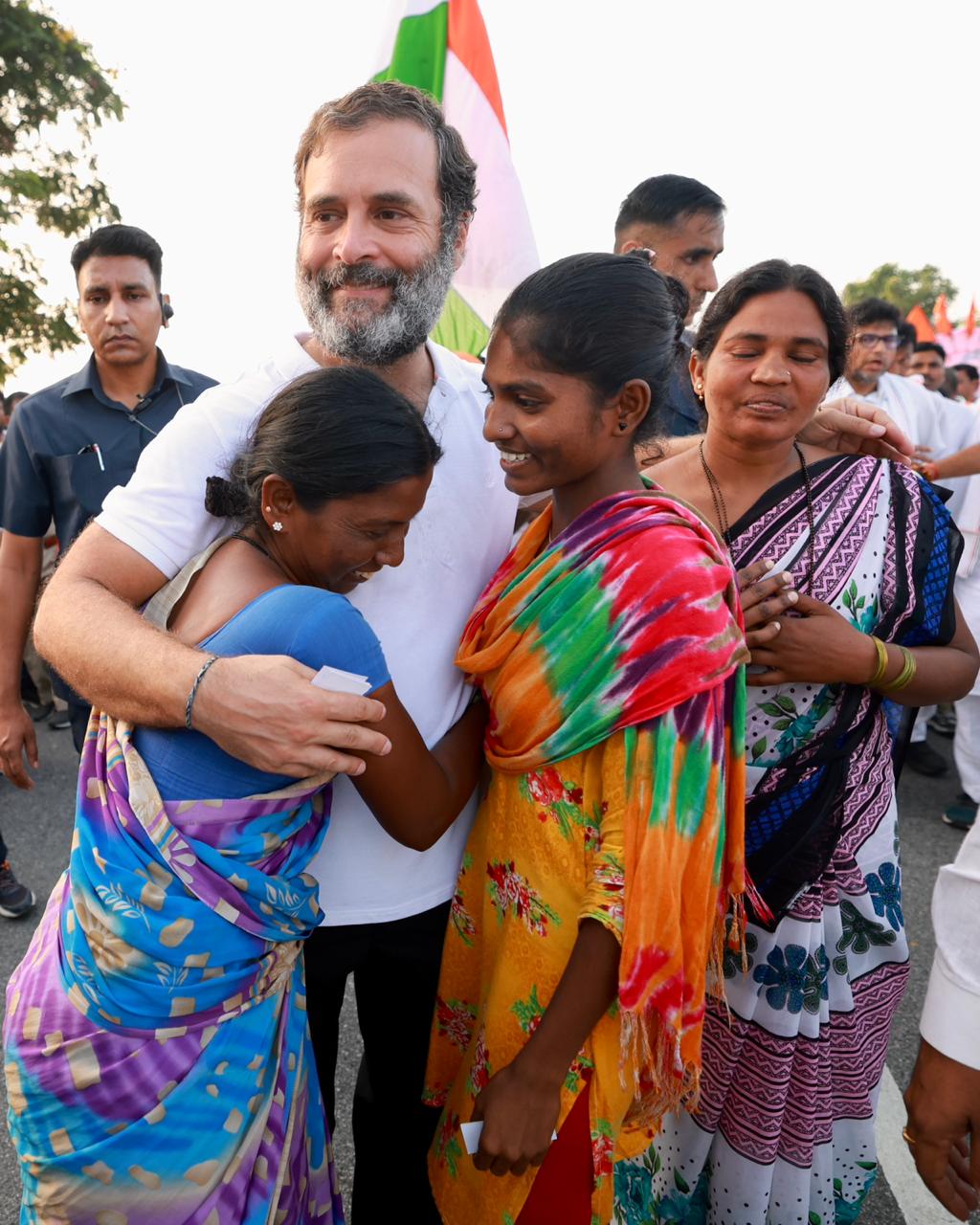 RAICHUR: On the last day of Bharat Jodo Yatra in poll-bound Karnataka, Congress leader Rahul Gandhi on Saturday said that his family has a long connection with the state, as he reminded that his grandmother and mother had won crucial elections from here.

Pointing out that today was the last day of the yatra in the state, covering more than 500 km, he thanked the people for their support, love and strength.

”My family has a long connection with Karnataka. I can never forget that you (people) gave victory to (former PM) Indira Gandhi from Chikkamagaluru (in 1978). I can also not forget you gave victory to Sonia Gandhi in Ballari (in 1999),” Rahul Gandhi said while concluding his speech at the end of the 45th day of the yatra here.

He then moved to the centre of the stage and held the hands of both state Congress President D K Shivakumar and Legislature Party leader Siddaramaiah and raised in the air, aimed at sending out a message of unity to the party cadres.

Both Siddaramaiah and Shivakumar, who are nursing chief ministerial ambitions ahead of assembly polls next year, are indulging in a game of political one-upmanship, with an intention to assert their position in the party’s state unit.

LIVE: #BharatJodoYatra resumes from Raichur district. We are fighting to empower the poor and unite a billion Indians.https://t.co/oWVUF9w4TT

The Bharat Jodo Yata will be entering neighbouring Telangana on Sunday morning after covering a short distance within the state’s borders.

The nationwide foot march entered the state on September 30 at Gundlupet in Chamarajanagara district and after covering several districts, it was in neighbouring Andhra Pradesh for three days from October 18. The yatra then re-entered Karnataka at Raichur on October 21.

Alleging that the BJP and RSS have spread hatred and violence in the country, Gandhi said, ”They have created rifts between brothers, they have tried to divide India. So, we have taken up this Bharat Jodo Yatra.” He also said that according to farmers in today’s India, their government is neither protecting nor helping them, and farming as a profession was not fetching adequate money.

Speaking about the tax/GST on fertilisers, tractors, pesticides and diesel, he further said: ”Farmers say that the MSP (minimum support price) which they have to get, the government is not ready to give them. After walking for 20-22 days on the streets of Karnataka, I could not find a single happy farmer here.” The former AICC president also said the youth are unable to find jobs despite having degree certificates, but if one has Rs 80 lakh he or she can become a sub-inspector in Karnataka.

This remark is an oblique reference to the police sub-inspectors recruitment scam that roiled the state with the Criminal Investigation Department (CID) probing the case.

The government in Karnataka takes 40 per cent commission in everything, he said ”there are various scams in the state like – Rs 430 crore borewell scam from the scheme which would have benefited SC/STs, Rs 150 crore Bhovi corporation scam, also scams in Ambedkar, Valmiki and Babu Jagjivan Ram development corporations. There are only scams in Karnataka.” The Wayanad MP said, on one side there is corruption and unemployment in the country, while on the other side there is price rise.

Questioning Prime Minister Narendra Modi’s silence on the increase in gas cylinder price, and giving two crore youth jobs every year, he said, ”From note ban and bad GST, he (Modi) has taken away jobs from crores of youth, he doesn’t utter a word on employment.” The world’s second richest man is from India and he is a close friend to the Prime Minister, he further pointed out without taking any name, and added that ”on one side there are the richest people in the world and on the other side there is unemployment and price rise.” Further claiming credit on behalf of Congress for implementing Article 371J of the Constitution, which grants special status to six backward districts of Hyderabad-Karnataka region, while pointing out that the then BJP government led by Atal Bihari Vajpayee and L K Advani had refused to do it, Gandhi highlighted the education, employment and infrastructure-related benefits that the region has gained because of the provision.

”It is unfortunate that the BJP government is unable to implement it properly, with large numbers of jobs still vacant. Once we come to power, we will do it on priority,” he added.

Earlier in the day, Gandhi walked with a group of ex-servicemen here.

He also met representatives from minority communities, and also had an interaction with MGNREGA workers and Dalit women from Raichur.

According to a press release from Congress, while meeting with minority community representatives, the party leader said he believed that the ”definition of India is a welcoming place for everyone”.

Gandhi also went on to say that he was ”extremely disturbed by the way a limited number of people that control India were treating minorities, women, Dalits, and small businesses,” and assured everyone that the divisiveness and hatred fostered by the BJP and RSS would not last long.