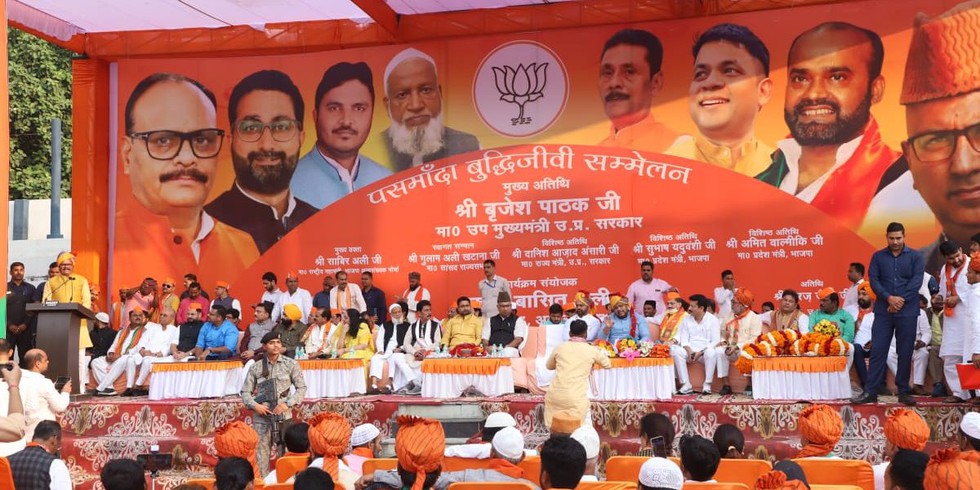 LUCKNOW: Timing to win all 80 Lok Sabha seats in Uttar Pradesh, the BJP is sharpening its outreach among numerically strong Pasmanda Muslims, which have benefitted from government schemes like free ration and housing.

The BJP, which following a state-level Pasmanda Muslim meet is planning to hold similar functions in all civic body areas, claims after social and economic empowerment of this section, it’s working for their political uplift.

In Pasmanda Muslim meets, the BJP leaders are highlighting that the Samajwadi Party, Bahujan Samaj Party (BSP) and the Congress always used Muslims as a ”vote bank” and did not give them their due.

The BJP’s game plan to attract Pasmanda Muslims is visible since the start of the party’s second consecutive term in UP as it inducted Danish Azad Ansari, hailing from the community, as the sole Muslim minister in the state cabinet.

Ansari told PTI, ”Central and state governments have done economic and social empowerment of Muslims so far. The BJP now wants political empowerment of Muslims by ensuring their participation. ” The common Muslims are getting benefits of government schemes like free ration and housing without discrimination and it is their moral responsibility to stand with them, he said.

The president of the Uttar Pradesh BJP’s minority wing, Kunwar Basit Ali, said, ”This time strong and trusted Muslim BJP workers will be given tickets in the urban local bodies from places where we have never won elections and where the BJP has never contested.” ”We have planned that people from different fraternities of Pasmanda Muslim will hold conferences in their societies and BJP leaders will participate in these to convey to them party’s ideology and government’s plans,” Ali said.

”The BJP government has done as much as it could for the Pasmanda Muslims. Now, it has to take it from them,” he said.

”The government has given benefits of its schemes to 4.5 crore Muslims in UP, they have been made a minister, head of minority commission, president of Urdu Academy, 80 per cent share to Pasmanda Muslims in various commissions and morchas of the government,” he said.

Asked about the change of attitude towards Muslims, Ali said, ”Most benefits of the government’s schemes have also been given to Muslims.” In Uttar Pradesh, 85 per cent of the Muslim population belongs to the Pasmanda community.

The Pasmanda community has 41 castes, including Ansari, Qureshi, Mansoori, Salmani and Siddiqui.

This class is considered to be the most backward in social, economic and political terms.

Muslim voters hold influence in 72 assembly and 14 Lok Sabha constituencies of Uttar Pradesh. Given the number of Pasmanda Muslims, if a party gets the support of this section, it can make a difference in the results.

According to the CSDS-Lokniti survey, eight per cent Muslim voters had voted for the BJP in the Uttar Pradesh Assembly elections held earlier this year, which was one per cent more than the 2017 figure.

The BJP snatched SP bastions of Azamgarh and Rampur, having strong presence of Muslim voters, in the byelections recently, giving it a new confidence to make inroads among the minority community members.

Meanwhile, the BJP’s attempt to bring the Pasmanda Muslims into its fold has been termed as futile by the opposition.

SP MP from Sambhal, Shafiqur Rahman Barq, questioned why the BJP, which is spreading communal hatred in the country, has suddenly started liking the Muslims. The whole matter is about the 2024 Lok Sabha elections, he said.

”No matter how hard BJP tries, no true Muslim will vote for it,” he said.

Uttar Pradesh Congress leader Shahnawaz Alam took a jibe at the BJP’s efforts, saying ”After BJP governments’ stand on hijab and other traditions associated with Muslims, they are not going to get their votes.” He said the BJP is claiming that it has provided benefits of government schemes to the Pasmanda Muslims but the ground reality is different.

The BJP government snatched the livelihood of the Qureshi community coming from the Pasmanda section. Apart from this, the plight of weavers is not hidden from anyone, the Congress leader said.

However, the state president of the All-India Pasmanda Muslim Mahaj, Wasim Raini, accused the SP, BSP and the Congress of always betraying the Pasmanda Muslims.

”If Pasmandas are getting some relief from somewhere, then shouldn’t they go there,” Raini asked.