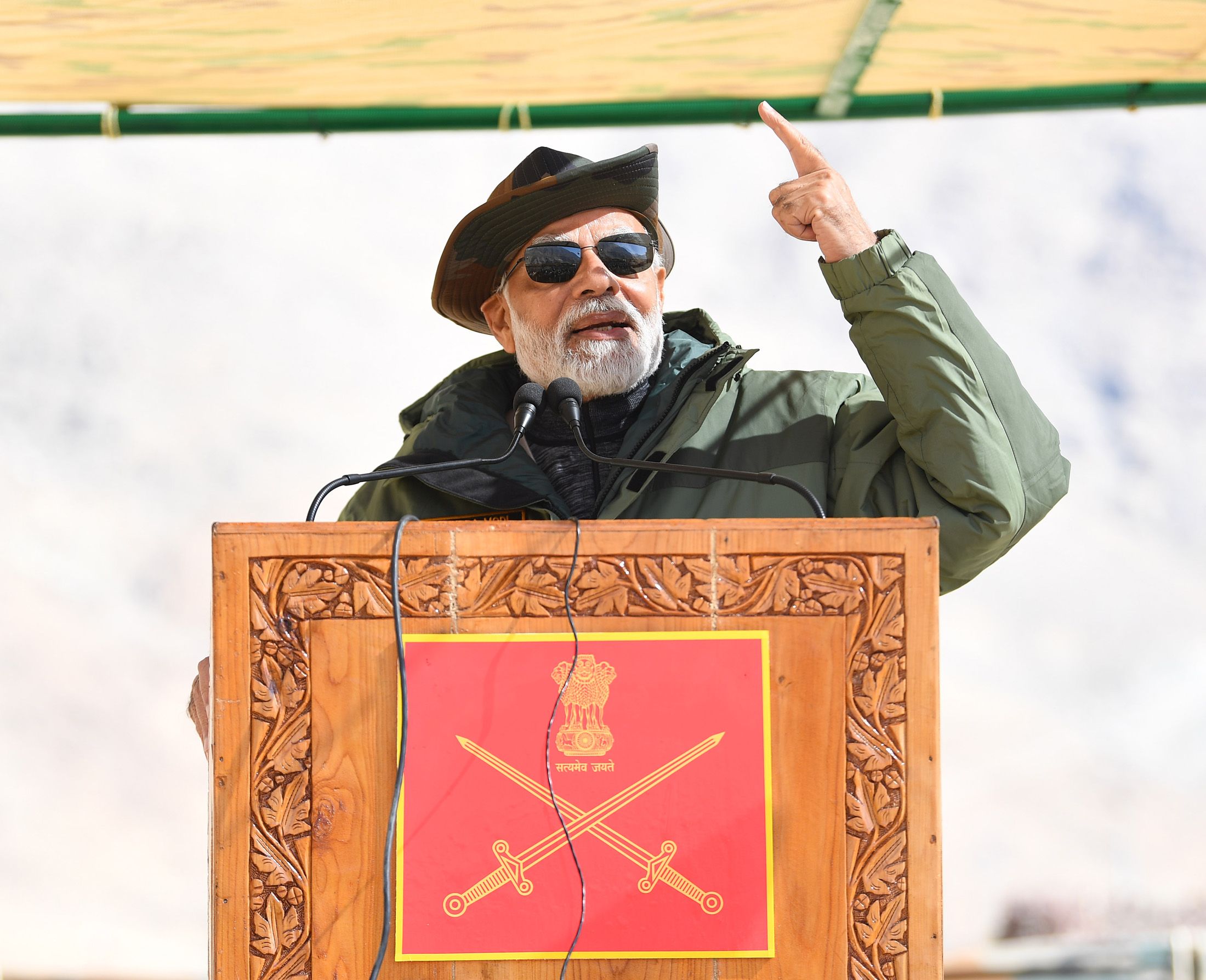 PM addressing at the celebration of Diwali with Armed Forces, in Kargil on October 24, 2022.

KARGIL: India stands for peace and has always considered war as not the first but last resort, but its armed forces have the strength and strategies to give a befitting reply to anyone who casts an evil eye on the nation, Prime Minister Narendra Modi said Monday.

Addressing soldiers here on Diwali, Modi said India is against war but also underscored the need for strength to ensure peace and asserted that its growing power boosts the chances of global peace and prosperity.

Sharing some more glimpses from the Diwali celebrations in Kargil. Met soldiers from all across India. Their courage and resolve inspires all our citizens. pic.twitter.com/j9RiEjD0Rj

The whole world is looking at India which is a ”balancing force”, he told soldiers at the site of the armed forces’ heroic feats in the Kargil war in 1999 as India beat back Pakistani forces.

Modi invoked the epics of Ramayan and Mahabharat to assert that it is in Indian tradition to avoid war be it in Lanka or Kurukshetra and the country stands for world peace.

The prime minister highlighted numerous measures taken by his government to boost economy and development, saying a country is safe only when its borders are secure, its economy robust and society full of self-confidence.

The armed forces are pillars of India’s security, he said.

Noting that India has become the fifth largest world economy from 10th in the last seven-eight years ago, Modi also spoke about the emergence of over 80,000 startups and the ISRO’s record of simultaneously launching 36 satellites to assert that these feats fill soldiers with pride. The tricolour acted as a protective shield for Indians in the Ukraine war, he said.

In a swipe at previous governments, the prime minister said his dispensation has worked to remove the shortcomings of the past poor governance which constricted India’s capabilities and limited its development.

He said India has been dealing with its enemies, both external and internal, with force and recounted the steps taken to uproot the terror, naxalism and extremism from within the country.

Modi claimed that India’s war against corruption is at a decisive stage and asserted that no corrupt person however powerful will be spared.

Actions of federal agencies in alleged cases of corruption have often drawn criticism from opposition parties which have claimed that the government has been using them to target their leaders for political reasons, a charge rejected by the ruling BJP.

In his address, Modi recalled his visit to this frontier region, which is part of Ladakh that touches the border with China as well, during the war when the Indian military had ”crushed the hood of terror”.

”There has not been a single war with Pakistan when Kargil has not flown the victory flag,” he said, adding that Diwali symbolised the ”celebration of the end of terror”.

”I have witnessed the Kargil war closely. It was my duty that had brought me to Kargil back then. There are many memories of that time when the sounds of victory were reverberating all around,” Modi said, continuing with his custom of spending time with soldiers in different parts of the country during Diwali.

Modi said ‘atmanirbhar bharat’ is the most important aspect of the country’s security as it needs to have minimal reliance on foreign weapons and systems.

”I admire our three wings of the armed forces as they decided that more than 400 pieces of defence equipment will no longer be bought from abroad, and will now be made in India itself,” he said. Indigenous weapons boost soldiers’ confidence and carry an element of surprise for the enemy, he said, giving examples of several such items, including fighter jets and missiles, inducted. From being an importer, Indian is now becoming an exporter in defence equipment, Modi said, adding that it is also working rapidly on modern and effective technology like drones.

The ‘amrit kaal’ will be a witness to the rising strength and capabilities of India, he said.

The prime minister also lauded the induction of women in the armed forces, saying this will boost their strength.

Reforms in the armed forces that were required for decades are now being implemented, he said.

Modi said a nation is safe when its borders are secure, economy strong and society full of confidence.

He said India has never viewed war as the first option. ”We have always seen war as the final resort. We are in favour of global peace… But peace cannot be achieved without strength,” Modi said.

”Our armed forces have the strategies as well as the strength. If anyone dares cast an evil eye on us, our three armed forces know very well how to give a befitting reply to the enemy in its own language,” the prime minister said.

In his speech, Modi also asserted that ”slave mentality” acted as an obstacle to India and its forces for long, and the country is now getting rid of it.

In this context, he mentioned his government’s decision to change the name of ‘Rajpath’ to ‘Kartavya Path’ and the installation of Subhas Chandra Bose’s statue in India Gate besides the opening of National War Memorial and police memorial.

The prime minister paid tributes to soldiers for their bravery and asserted that they have been his family for many years, and Diwali’s sweetness and brightness to him is in their midst.

Since coming to power in 2014, Modi has been visiting different military facilities to celebrate Diwali. In 2014, the prime minister had celebrated the festival of lights with soldiers at the Siachen Glacier. In the following year, on the 50th anniversary of the 1965 war with Pakistan, Modi visited three memorials in Punjab where the Indian armed forces had fought pitched battles that proved to be key to the country’s victory.

In 2016, the prime minister travelled to Himachal Pradesh to meet personnel of the Indo-Tibetan Border Police (ITBP), the Dogra Scouts and the army at Sumdoh near the China border.

Modi, in 2017, was in the Gurez sector in north Kashmir, while in 2018, he celebrated Diwali in Harsil in Uttarakhand which was followed by a visit to Kedarnath.

After being re-elected to the high office in 2019, Modi celebrated Diwali in Rajouri in Jammu and Kashmir. In 2020, he was at a border post of Longewala on Diwali, while last year, he was in Nowshera.